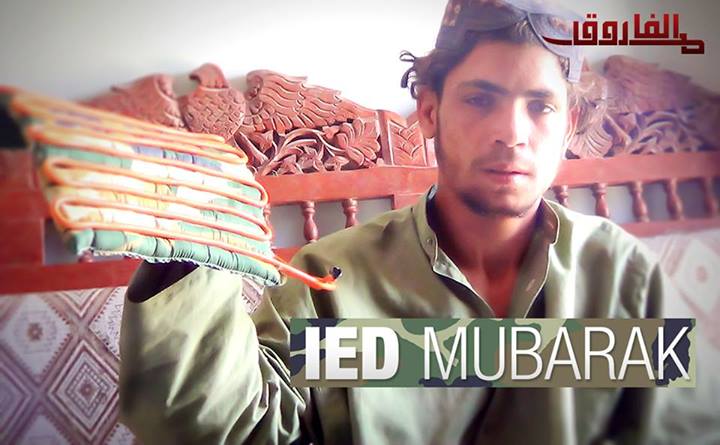 A group of “media mujahideen” affiliated with the Sistan Baluchestan Sunni insurgent group Harakat Ansar Iran (HAI) announced Tuesday that they had relaunched an English-language Facebook page to promote the group.

The group, which calls itself Al Farooq Media and which is almost certainly based outside Iran, began to promote HAI in November 2012 with the launch of several English and Arabic social media accounts. The group’s initial Facebook page was closed, however, because it violated terms of service.

Al Farooq re-introduced itself with this image of a jihadi holding an improvised explosive device, with a holiday-themed pun:

Alhamdu li Allah We present to u this Eid, the relaunch of our Facebook page, #AlFarooq media https://t.co/g5myE5pMcO pic.twitter.com/W4c5B3CChq

The man shown in the picture is almost certainly not a Sunni Baloch separatist fighter from the area— in other words, the image does not show HAI.

However, the relationship between Al Farooq Media and HAI indicates how “media mujahideen” are not promoting but also changing the context of local groups and causes.

Before Al Farooq’s involvement with HAI, the Sistan Baluchestan group ran blogs in Persian, English and Arabic. However, the Persian blog was the group’s main outlet and focussed almost entirely on local issues, including how drug smuggling was affecting the local Sunni community and how the group had agreed a cooperation with a Baloch separatist group in Pakistan, Sipah-e-Sahaba.

Where HAI talked about its activities and reason for formation, its focus was on its local struggle against the Iranian authoritie. While its discourse included racial slurs against Shia Islam — the religion of the Islamic Republic — those slurs were part of the narrative of how the Iranian authorities were oppressing Sunnis in Sistan Baluchestan, and not as part a wider, more abstract Sunni versus Shia ideology.

HAI’s stated aims, as set out in this post of May 2013 (but which is a republication of an earlier post on a blog that was removed by a previous host) are:

We are mujahideen of the Ahlus Sunnah of Iran, our aims are to:

Protect the oppressed Sunni minorities of Iran against their Shia government.
Strike at the head and heart of shii’sm, Tehran and Qum so as to stem the destruction they spread amongst Ahlus Sunnah worldwide (like in Syria and Iraq).
Establish Sharee’ah in our lands.
Regain Iran for the Muslims, with the help of Allah.

With the involvement of Al Farooq Media, the tone and content of HAI’s public-facing messages changed dramatically. The messages put out by Al Farooq are in English and Arabic, not Persian, reflecting the fact that the “media mujahideen” group is not writing as or for local Baloch in Sistan Baluchestan and perhaps in the Baloch regions of Afghanistan and Pakistan, but for a transnational audience in the Sunni Arab and English-speaking world.

The messages put out by Al Farooq situate HAI’s struggle not as local battle for religious and political autonomy, or even for separatism, but as part of a wider ideological struggle of Sunnis versus “infidels” and particularly Shia Muslims.

This tweet from May 2013 is a call for Sunni Muslims to leave their homes and wage jihad — not necessarily in Sistan Baluchestan (in fact, it would be difficult at best to understand how young men from outside Iran could travel to the province to fight the IRGC) but anywhere:

One effect of co-opting HAI and bringing in its operations in Sistan Baluchestan within the wider sphere of Sunni jihad has been to raise awareness among pro-jihad factions around the world of HAI’s activities. While HAI’s operations were previously little known outside Iran — with Western wire agencies devoting only a few column inches to last year’s suicide bombing in Chabahar, Al Farooq’s press releases, widely distributed among jihadist forums and blogs, made a far greater audience aware of the group’s existence.

This press release from July 2013 announces a suicide operation by HAI in Chabahar, which killed IRGC personnel. Yet the act is framed not as part of a local insurgency against the Iranian authorities but an act by Muslims as part of global jihad against “oppressors”:

The attack comes as a reply to the crimes against Muslims by the oppressive tyrannical Rawafid government in Iran and their support in the massacre of our brothers and sisters in As-Sham. From now on, the Shia will face our replies. And more will come bi’ithnillah.


Al Farooq have also put out Arabic-language videos in HAI’s name, such as this — which is actually an audio message with an overlay that includes Quranic quotes — which announces the start of a new operation, Thunder, against Iranian forces. The speaker, named as Saif Allah Al Balushi, an Arabized version of a Baloch name, speaks in fluent classical Arabic, a great feat for a native Persian- speaker from Sistan Baluchestan.

As well as co-opting HAI into the wider ideological framework of global jihad, Al Farooq is also using HAI’s name to disseminate jihadi literature, including by using the organization’s blog to host what it describes as an “e-library” of Sunni jihadi texts.

The books hosted on the site include, as Al Farooq describe them, “downloadable E-Books by classical and contemporary scholars pertaining to the topic of Jihad as well as Shi’ism” with the first book offered being “The Book of Jihad” by Ibn Nuhaas. Al Farooq note that Abdullah Azzam — a teacher and mentor of Osama Bin Laden — considered the volume to be the “best book on jihad”, adding “It covers the definitions of Jihad, its Fiqh, its rewards and common misconceptions in the light of the Qur’an and sunnah. Furthermore, due to its concision and clarity, it is an interesting and quick read making it both an excellent scholarly work and a book for the masses that has been inspiring countless generations of Muslims.”

Much is still unclear about this story. The powers behind Al Farooq Media are not identified, and HAI’s response to the co-optation by “media mujahideen” may not be one of simple acceptance or even alliance.

Yet the possibility is here: “global jihad” may have reached Iran.

The extent to which Al Farooq Media have placed HAI’s messages within the context of global jihad rather than a local struggle can be seen by examining two video messages put out by the group.

The first message, published on October 14, 2013, is presented as a message from a HAI mujahid to Iran’s Supreme Leader, Ayatollah Ali Khamenei. However, since the message is in Arabic it is clear that the target audience for the video is not the Supreme Leader but Arabic-speaking, pro-jihadi viewers.

Though it is billed as a message to Khamenei, the video does not set out the specific grievances of local Sunnis in Sistan Baluchestan, but instead talks generally about jihad and the sectarian fight of Sunnis against Shia Islam. Although the message is purportedly from a specific ethnic group in a specific area of Iran, talking about a specific conflict, it is presented in such general terms that it could have been shot anywhere and addressed to anyone:

The video ends with an image of HAI’s two suicide bombers, photoshopped to make it look like they are in Paradise, and a message in Arabic and English asking for assistance, “The door of helping the mujahideen of Harakat Ansar is always open. Don’t forget us in your Duas.”

The second video is dated October 21, 2012 — though the upload date was probably later and the video was set to this date by those responsible for uploading it — and is a commemoration of the suicide bomber, named as Hamza, who carried out the terror attack outside a mosque in in Chabahar on October 19, 2012. Iranian media said that two Basij members were killed in the blast, whereas HAI reported that 20 IRGC officers were killed. Iranian lawmakers later accused Qatar of assisting HAI in the attack.

The video, which consists of still photographs of the suicide bomber taken just before he blew himself up in Chabahar, frames the terror attack in terms of global jihad and the sectarian struggle between Sunnis and Shias. The message, intended as an inspirational illustration of the concept of martyrdom for the sake of the jihadi cause, is presented in the tradition of martyrdom stories — the story tells of Hamza’s positive characteristics and devotion to the cause of jihad (not local causes), and how he decided to give his life.

The video’s English subtitles explain that Hamza “spent his entire life living under the oppression of the Shia Government of Iran. After witnessing the constant persecution of the Ahlus Sunnah in Iran, he joined the ranks of the Mujahideen to wage Jihad against the Shia Kuffar. At only 19 years old, he was an inspiration and a joy to all the mujahideen at Al Ansar Iran (sic). With a big smile on his face, he made a decision to sacrifice his life for the sake of Allah.”

The video now switches to stills of Hamza taken wearing his suicide vest, and relates that the youth “performed a martyrdom operation which shook the Iranian city of Chabahar”. The video now shows its ignorance of the local cause behind the operation, as it gets details wrong, noting that Hamza killed 20 Shia kafir police officers”.

Hamza, the video explains “was an example of a true Mujahid who sacrificed this Dunya (world) for the Akhira (afterlife).”