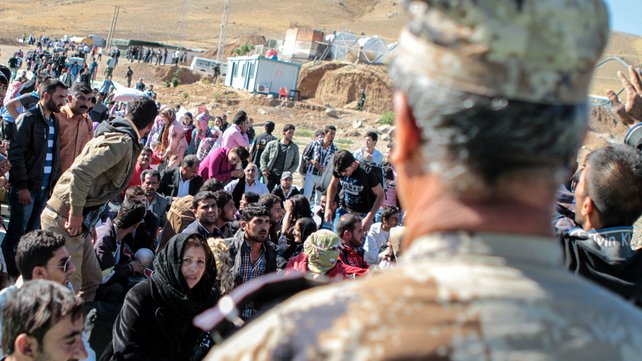 Activists and residents claim that 50 Syrian refugees, trapped along the Jordanian-Syrian border by regime bombing and shelling, died of starvation and malnutrition on Monday and Tuesday.

The source said the deaths were in the Syrian border villages of Daal, Sheikh Maskin, and Al Tufs.

“We are starting to see children and even adults dying from simple health conditions such as dehydration and diarrhoea,” said Ahmad Al Jayousi, a volunteer nurse at a makeshift field hospital in Al Tufs, where 20 patients reportedly died of malnutrition-related complications this week.

The Syrian opposition says that 250 civilians in southern Syria have died from starvation-related health conditions this month.

Amnesty International claimed this week that hundreds of refugees have been waiting on the border, unable to enter Jordan.

About 400 Syrians crossed into Jordan early Tuesday, the according to the Jordanian Armed Forces said. Most had travelled from the cities of Homs, and Hama.

Russian Prime Minister Dmitry Medvedev said Friday that calls for Syrian Prime Minister Bashar al-Assad to stand down before the Geneva II peace conference, and before obtaining guarantees regarding political dialog and regarding his participation in any election process, are “unrealistic”.

“I believe that the ideas that are sometimes being put forward – let’s get rid of President Assad, and then agree on everything, are unrealistic as long as President Assad in power. He’s not crazy, he should get some kind of guarantee or in any case suggestions regarding the development of political dialog in Syria itself, the possible elections, his own fate,” Medvedev said.

Medvedev added, “You agree that when he (Assad) recalls the fate of President (Hosni) Mubarak, and especially the fate of Libyan leader Colonel Muammar Gaddafi, then his mood probably does not improve , so you can’t just say “get lost and then we can on everything.”

The Russian Prime Minister said that the most important thing was not to exacerbate the situation, adding that the solution to the Syrian crisis could not be put together “in Moscow or Brussels and anywhere”, but was an “internal process, what is necessary is that everyone agrees to everything, the Alawites, the Druze, the Christians, the Sunnis and the Shias, and then maybe we can escape this crisis.”

Medvedev said that a repetition of what had happened in Libya was unacceptable.

“Right now there is no Government in Libya,” he said.