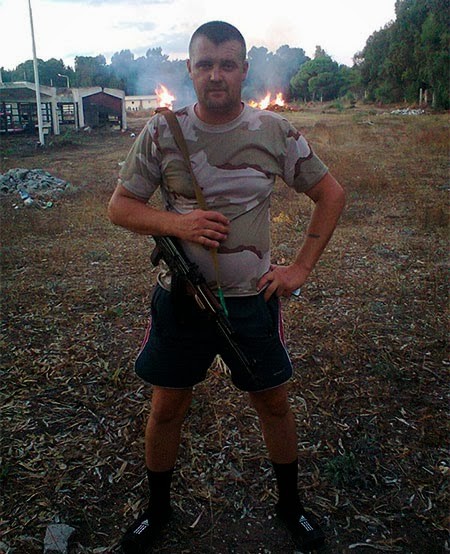 A Russian security firm has denied reports that it has deployed personnel to Syria to assist the Syrian regime. However, Russian media sources say they have tracked and interviewed a man hired by a private military firm, the Slavonic Corps Limited, who claimed to have been contracted to guard regime economic objectives.

Reports of the alleged killing of a Russian national, named as Alexei Maliuta, near Palmyra in Homs Province began to circulate two weeks ago. The Army of Islam claimed to have killed several Russian military personnel in an ambush on an Syrian Arab Army convoy on the main road to as-Soukhna.

Map showing the area where the ambush occurred:

The statement included a photograph of one of the Russians who insurgents claimed to have killed, together with a photograph of an identity card belonging to man named as Alexei Maliuta and working for the Moran Security Group. 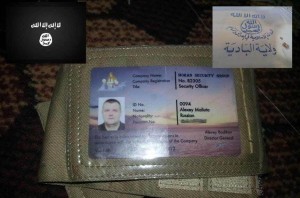 According to its website, the Moran Security Group provides a variety of contract security services, including armed escort of ships,provision of sophisticated offshore threat data and analysis, logistics in the maritime environment in conditions of piracy or naval acts, customs and border control and intelligence operations.

MSG has experience in the Middle East, including in Iraq where, according to its website, in 2010 it “facilitated the collection of delinquent payment for equipment supplied to one of the Ministries. We interfaced with the Ministry and the Central Bank of Iraq and ensured the payment of the debt.”

In response to an enquiry by EA, MSG denied that it had personnel in Syria and said that the man named as being killed in Syria had been confirmed alive and in Russia.

A spokesperson for the group wrote, “we have not existent contracts in Syria and subsequently we have no deployed personnel there. As regards to Alexey Maluita he is in Russia and we have contacted them immediately when we received information through Internet. Moreover our representative met with him in Russia to verify that his phone is not in roaming. It means that all information circulated through Internet is not correct and trustful.”

The Russian news website Fontanka spoke with Alexei Badikov, whom it named as a senior manager with MSG. According to Fontanka, Badikov said that Maliuta had worked for MSG in 2012 and the early part of 2013, in operations involving anti-piracy, but had since quit.

Among the documents shown by the insurgents who said they had ambushed the convoy in which Russian personnel were present was a contract which named a second Russian company, Slavonic Corps Ltd, which was described as a private military firm that had registered in Hong Kong in 2012.

According to Fontanka, Badikov said that there is no relationship between Slavonic Corps and MSG.

However, Fontanka established that the director of Slavonic Corps is Sergei Kramskoi, who lives in St. Petersburg. According to Fontanka, Kramskoi heads two firms named Slavonic Corps, established in January and April 2012. The founder of both firms is Sergei Sokharev, whom Fontanka contacted by telephone. Sokharev told Fontanka that his company did not have any activities in Syria.

Fontanka also noticed that Slavonic Corps said it had signed the International Code of Conduct for Private Security Service Providers (IcoC) on June 1, 2012. That form listed the company as being located in St Petersburg and named the Deputy General Director as Boris Chikin.

According to Fontanka, Chikin is a well-known figure in St Petersburg, and an expert in practical shooting and in training bodyguards.

Chikin is also one of the founders of the Moran Security Group.

When Fontanka contacted Chikin, he denied all connection with Slavonic Corps Limited.

Fontanka then asked Chikin why his signature appears on the IcoC document for Slavonic Corps.

Fontanka: But don’t you hold the post of deputy General Director for Slavonic Corps, and didn’t you sign the International Code of Conduct for Private Security Service Providers on June 1?

Chikin: There was some sort of strange story with that. I was asked to do that, and that’s it. Neither I nor the Moran Security Group have any kind of connection with Slavonic Corps.

If that story is not confusing enough — and Fontanka admitted that it could be a coincidence that the name of Slavonic Corps Limited’s Deputy General Director is Boris Chikin — Fontanka also noted that advertisements for vacancies in both companies are worded almost identically.

Fontanka said that even though the Slavonic Corps Limited document shown in the insurgents’ statement seemed to be genuine, and Maliuta did seem to have been present in Syria in October 2013, their investigations showed that Maliuta was alive and well and in Russia. The Moran Security Group put Fontanka in contact with Maliuta’s brother Sergei, who spoke to them on the telephone. Sergei told Fontanka that Maliuta had returned home alive and well, nine days after his death was reported by insurgents.

Fontanka: Sergei, tell me, in October 2013, did you go on a business trip to Syria?

Fontanka: Under contract with any firm?

Fontanka: Did everyone return?

Fontanka: What tasks did you carry out?

Sergei: Protection and defense of the Syrian Republic’s economic objectives. The idea is to discharge these responsibilities, so that the Syrian army units could take participate in the fight against bandits.

Fontanka: Have you and your colleagues been involved in armed clashes ?

Sergei: Of course not.

Fontanka: How is it that some of Aleksei’s (Maliuta’s) documents were in the possession of the opposition?

Sergei: They were simply stolen. Some of the guys went into a store to buy food. A backpack that was left unguarded for a short while got stolen.

Fontanka were also sent a video that Sergei Maliuta said proved his brother Alexei was alive and well.

Fontanka concluded that all of the Russian contractors hired by the private military firm Slavonic Corps Limited who went to Syria in September 2013 returned to Russia. The short stay was because the contracting host failed to meet its financial obligations, which caused problems for the Slavonic Corps fighters in terms of food supplies and other living arrangements. The contract was therefore terminated and the Russian contractors were recalled from Syria.