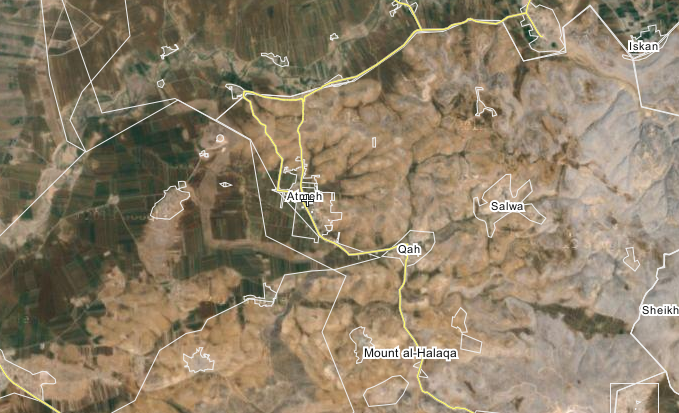 Over the past week, there have been increasing reports of clashes between insurgents from various groups, including the Free Syrian Army, the Islamic State of Iraq and Ash Sham, and Ahrar Ash Sham, in and around the village of Āţimah (Atmeh) in Idlib Province.

An EA correspondent with contacts in Syria reports that clashes began on or around September 25, when insurgents eliminated a PKK uphill position using mortar fire. The clashes occurred following reports on September 24 from insurgents who claimed to have spotted PKK fighters carrying light weapons in mountainous areas close to Āţimah.

Those clashes have been ongoing since September 25. On Wednesday, insurgents claimed to have killed several Kurdish fighters — sources vary on whether they were with the PKK movement, the YPG militia, or both — mostly with mortars. Clashes erupted after PKK fighters attempted to reach Āţimah to capture fighters close to ISIS who reneged on a deal, likely concerning the handover of prisoners, although the details remain unconfirmed. Fierce clashes ensured over the next several days, during which both sides used heavy weapons and insurgents fired rockets on PKK positions, eventually pushing back PKK fighters, so that the Kurdish faction no longer has its men in positions in the mountains with clear views into Āţimah.

The battle has united FSA and Islamist factions, who are fighting the PKK together.

Photo posted by activist on Wednesday claims to show weapons captured by insurgents from PKK fighters in the area.

Hans Scholl (@ver_scholl_en) has created this map, based on several sources, showing where the fighting is taking place:

Wednesday’s news matches previous reports regarding dates and locations of the clashes. Sources in the Caucasus reported last week that the predominantly Russian-speaking foreign jihadist faction Jaish al-Muhajireen Wal Ansar — which is led by an ethnic Chechen, Abu Umar Al Shishani, who is also the leader of ISIS’s northern faction — have been battling with fighters from the Turkish PKK in Idlib Province, on the border with Turkey.

According to Kavkaz Center, Jaish began battling with PKK fighters on or around September 25, near the village of Āţimah on the Turkish border.

There was a ceasefire between the two groups, but the Kurds violated it and captured an area of high ground above Āţimah, from where they began firing on Jaish.

In response, sources in the Caucasus with links to insurgents said, Jaish sent a unit to storm the high ground, driving the PKK back. The sources say that around 25 Kurdish PKK fighters were killed, along with five Jaish fighters, including two Chechens, a Bosnian and two from Turkmenistan. By September 26, Jaish had regained control of the area around Āţimah.

According to EA’s correspondent, Āţimah is a resting area where large numbers of battle-hardened insurgent fighters are concentrated.

There are unconfirmed reports of several points where clashes are taking place, between Āţimah and PKK positions in Kurdish-held territories.

During the clashes, PKK sources put out the rumor that Jaish leader Al Shishani had been killed by Kurdish fighters. However, that rumor has not been proven, and on Wednesday a new video showing Al Shishani was posted by jihadist sources.

Russian-language pro-jihad sources have also reported ongoing fighting between the Islamic State of Iraq and Ash Sham and Kurdish PKK fighters in the village of Al Yusufiyah in Hasakah Province in northeastern Syria.

YPG has launched an offensive against al Nusra and ISIS in the village of Yusif outside the town Celaxa. More details soon. #TwitterKurds

PUK Media reported on September 29 that the Kurdish YPG launched an offensive against Jabhat Al Nusra and ISIS, in Yûsifiyê (Yusif), near Celaxa, a small town in an oil rich area near Qamishli.

PUK write that the attack took place in the early hours of September 27, and pushed back Islamist fighters from the village.