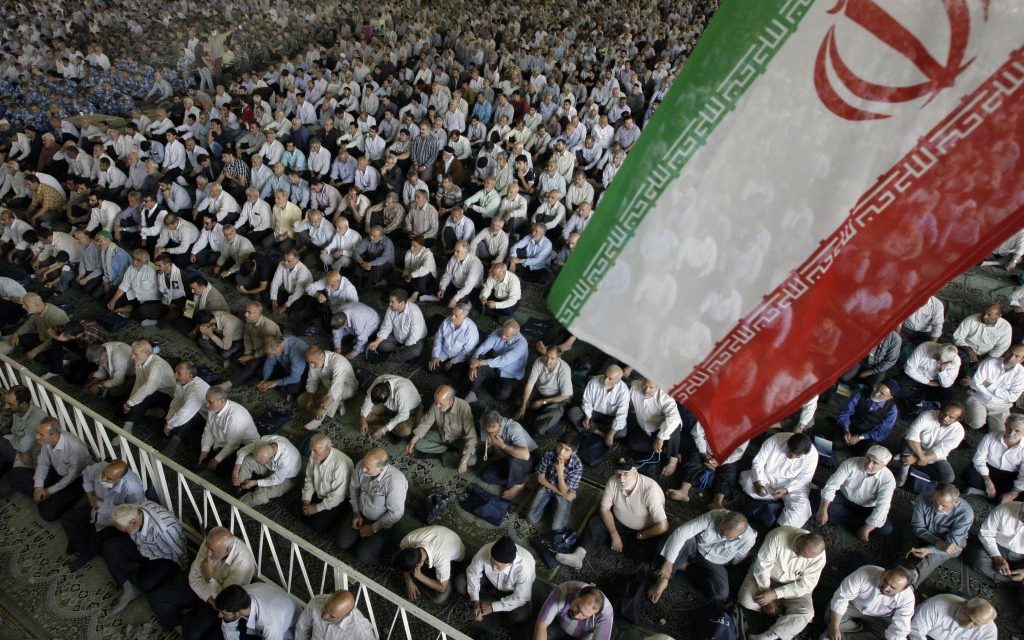 Obama Cautions: Rouhani Is “Not Even the Ultimate Decision Maker”

Seddiqi said, “The presidents of Iran and the United States should join hands and end these cruel sanctions, which have not only harmed the Iranian nation but also the American and the European nations.”

However, the most telling remark came in the introduction to the Prayer. Former Minister of Culture Hossein Saffar Harandi was greeted by chants from the audience of “Death in America”, a feature of the Prayer for 34 years.

This time, however, there was a twist: Saffar Harandi chided those who were shouting and told them to stop.

And there is a further signal this morning of the regime’s support for the approach to Washington. State outlet Press TV features the remarks of a US official — and does so positively.

The site quotes an interview by the State Department’s Alan Eyre to an Azerbaijani news agency, “[President] Obama has said that he’s interested in peaceful solution to Iran’s nuclear issue.”

Press TV then emphasizes, “Eyre added that the United States respects Iran’s ‘peaceful nuclear rights’ as a signatory to the nuclear Non-Proliferation Treaty.”

Earlier in the week, the reformist newspaper Shargh had broken the informal ban on postive headlines for Washington’s representatives with a front-page interview with Eyre, the State Department’s leading Persian-speaking official.

Russia Has Not Had Substantive Talks With Iran Over S-300, Antey-2500 System

Iran’s Ambassador to Russia, Seyed Mahmoud-Reza Sajjadi, said Saturday that Moscow and Teheran had yet to hold substantive talks on the issue of the S-300 anti-aircraft system to Iran.

Sajjadi made the comments in response to a question about how negotiations between Russia and Iran were proceeding on the issue of Russia’s supplying its Antey-2500 air defense missile system to Iran in place of the S-300PMU1 system to avoid a lawsuit about Moscow’s cancellation of a delivery of the latter system.

“The Syrian issue showed that we and Russia are in the same boat. As far as the main issues are concerned, Russia and Iran have developed a very good understanding,” he said, adding that he did not see the issue of the S-300 as being an obstacle to that understanding.

He added, “Russia and Iran are against a unipolar world, igniting the war…. We are against the presence of foreign forces in the Caspian region…I hope that our cooperation in all areas will be expanded.”

Obama Cautions: Rouhani Is “Not Even the Ultimate Decision Maker”

Barack Obama has issued his own caution to President Rouhani while continuing to promote the process of engagement:

I think Rouhani has staked his position on the idea that he can improve relations with the rest of the world. And so far, he’s been saying a lot of the right things. And the question now is, can he follow through? The way the Iranian system works, he’s not the only decision maker — he’s not even the ultimate decision maker.

But if in fact he is able to present a credible plan that says Iran is pursuing peaceful nuclear energy but we’re not pursuing nuclear weapons, and we are willing to be part of a internationally verified structure so that all other countries in the world know they are not pursuing nuclear weapons, then, in fact, they can improve relations, improve their economy. And we should test that.

Obama damped down Israeli Prime Minister Benjamin Netanyahu’s warning of an Iran on the verge of a nuclear weapon — “Our assessment continues to be a year or more away” — but offered West Jerusalem reassurance:

What I’ve said to Prime Minister Netanyahu is that the entire point of us setting up sanctions and putting pressure on the Iranian economy was to bring them to the table in a serious way to see if we can resolve this issue diplomatically. And we’ve got to test that. We’re not going to take a bad deal. We are going to make sure that we verify any agreement that we might strike.

But it is very much in not only the United States’ interest but also Israel’s interest to see if we can resolve this without some sort of military conflict. And so we now have the time to have those serious conversations, and we’ll be able to measure how serious the Iranians are.

Fars, the outlet of the Revolutionary Guards has now put out its version of the Supreme Leader’s remarks on Saturday on President Rouhani’s engagement of the US — it says he advised them “to take their steps strongly, but carefully and after thorough study”.

The site adds the spin that Ayatollah Khamenei was “underlining that the country’s officials should always have national interests, Islamic Republic’s exalted causes and national honor in mind” and quotes him:

We support the movement in government’s diplomacy, including the New York visit, since we hold trust in the … government and we are optimistic about it, but some of what happened in [President Rouhani’s] New York visit were not proper because we believe the US administration is untrustworthy, conceited, illogical and unfaithful to its pledges.

The Supreme Leader asserted, according to Fars, “The US administration moves in the direction of the Zionists’ interests, and it blackmails the entire world and is blackmailed by the Zionist regime.”

Fars News, the outlet of the Revolutionary Guards, skips the Supreme Leader’s remarks about President Rouhani’s engagement of the US.

The site prefers this portrayal of Ayatollah Khamenei’s speech to graduating Army cadets:

All those who are used to posing verbal threats to Iran should know that our response to any kind of mischief against the Iranian nation will be serious and hard….

Israel’s leaders sometimes threaten Iran, but they know that if they do a damn thing, the Islamic Republic will raze Tel Aviv and Haifa to the ground.

Supreme Leader: “I Support Rouhani But Some Developments in New York Were Not Fitting”

Is the Supreme Leader distancing himself from President Rouhani’s engagement of the West?

Ayatollah Khamenei spoke on Saturday about Rouhani’s five-day stay in New York last week, including a speech at the United Nations, “We support the government’s diplomatic movements and place importance on diplomatic efforts, and support what was in this last trip.”

However, the Supreme Leader then added, “Of course, in our opinion some of what occurred in the New York trip was not fitting.”

Khamenei did not explain further but said, “We are optimistic about our Government’s diplomatic envoy but pessimistic about Americans. The US Government is untrustworthy, self-important, and a promise-breaker.”

The Supreme Leader concluded, “The US Government is a government captured by the Zionist international network and has to appease the occupying regime. It has to show flexibility for the sake of the Zionists.”

Earlier this week, former President Hashemi Rafsanjani put out the clear signal for a rapprochement with Saudi Arabia, as his website featured the headline, “Is An Iran-Saudi Alliance on the Way?” and a photograph of Rafsanjani in the 1990s with Saudi King Fahd.

The Cultural Adviser to Expediency Council, headed by Rafsanjani, has followed up. Gholam Ali Rejaei said Rafsanjani had received a letter from Saudi’s current monarch:

King Abdullah has invited Ayatollah Hashemi Rafsanjani to Hajj [the pilgrimage to Mecca] this year….

It is still not clear what answer the Ayatollah will give to the invitation. You must wait. Anything is possible.

The important point that interested me was that King Abdullah, who has a personal relationship with and confidence in Hashemi, wrote a very unique and emotional expression at the bottom of the letter.

The King signed: “Your Brother Abdullah. You must well know the strength of this trust. Alas, some do not know.”