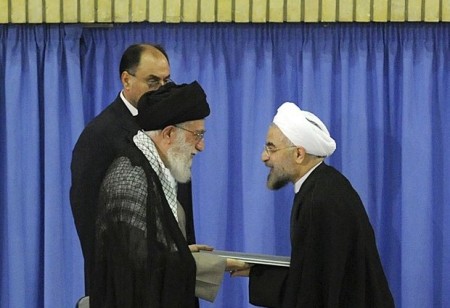 LATEST: A Western Offer for Iran to Have Uranium Enrichment to 5%?

Israel-Iran Analysis: Is There Any Way Around Netanyahu’s Rhetoric?

SUMMARY: Unsurprisingly, President Rouhani’s phone call with Barack Obama — the first high-level contact between US and Iranian leaders since 1979 — has aroused much excitement and comment in the Islamic Republic.

Most of the reaction has been favorable, including the support of more than 200 of Iran’s 290 MPs in a motion praising Rouhani, but there has also been grumbling. Hard-line publications such as Keyhan and Raja News scolded the President.

More importantly, so did the head of the Revolutionary Guards, Mohammad Ali Jafari, “He should have turned down a phone conversation until after the American government has shown its sincerity.”

On Monday, the Supreme Leader’s office made a notable intervention. The outcome: Rouhani 1, Guards 0.

Some of those who criticized do not pay attention to the point that the trip to New York was primarily to untie the knot of the problems of the people and the system.

In the matter of the telephone conversation between the two Presidents, the Revolution’s value, fundamentals and basics were also not violated or trampled. In any case, they [the US] requested this meeting. Why don’t those who oppose it point out that during the trip the American President’s numerous requests to meet with Iran were denied by Iran, and that the media wrote that this matter humiliated Obama?

We have more in an Iran Spotlight.

A Western Offer for Iran to Have Uranium Enrichment to 5%?

Lithuanian Foreign Minister Linas Linkevicius has said Western governments are considering a deal for Iran to continue some uranium enrichment.

Linkevicius’s words have added weight because Lithuania holds the rotating Presidency of the European Union until the end of 2013.

I believe part of the game is that if the Iranians prove that whatever they are doing is peaceful, it will, as I understand, be possible for them to conduct it.

It’s conditional. It is not a done deal, but nevertheless it is a possibility to explore.

The Foreign Minister did not give details of the offer, but it fits the idea of allowing Iran to enrich uranium up to 5% while giving up its higher-level enrichment of 20% — still only at a point for civilian use, but capable of being enriched to a military standard of more than 90%.

Tehran has indicated it would accept this deal if given a guaranteed supply of 20% uranium and a lifting of sanctions.

Jack Dorsey, the creator of Twitter, used his invention to ask President Rouhani a question on Tuesday about Internet freedom for Iranians.

Evening, @Jack. As I told @camanpour, my efforts geared 2 ensure my ppl'll comfortably b able 2 access all info globally as is their #right.

Interestingly, the story came to us not via Western media but from Iran’s Young Journalists Club.

We expected that President Rouhani’s “engagement” strategy would include a reach-out to Gulf States, and former President Hashemi Rafsanjani — Rouhani’s mentor — has confirmed it on his website today.

Rafsanjani, who tried to improve relations with Saudi Arabia when he was President in the 1990s, features the headline, “Is an Iran-Saudi Alliance on the Way?”, and a picture of himself with King Fahd.

Rafsanjani then explains that Tehran and Riyadh can be a “major regional hub” to solve international problems. He tren cited “the journey of my past”, as he approached the Saudis to co-operate on issues like Iraq, Afghanistan, Lebanon, and Palestine were drawn between the authorities refused to act.

Hejazi told a conference yesterday, “We cannot imagine that with one smile their hostile stances and historical animosity towards Iran will be resolved. The space between the enemy’s smile and frown is very short, and likewise the tone of the US president changed after meeting with the Zionists.”

He added, “We cannot forget that the enemy is determined in its animosity. That is why we must always pay attention to preserving our readiness and reinforcing our defenses, so that we are powerful, capable, and able to speak from a position of strength during negotiations.”

Hejazi also claimed that the change in tone from the US is due to Tehran’s “resistance capabilities and ability to influence regional equations, as well as our power both in and out of the region, have caused the enemy to shrink from its past stances.”

Deputy Minister of Defense, Brig. Gen. Majid Bokaei echoed Hejazi’s rhetoric, stating “The time between a smile and the enemy’s frown is short and we must not be deceived by these smiles, because they do not accept our system and they are in conflict with it. Even if the nuclear issue is solved they will make excuses with another position.”

Despite the steps toward rapprochement being made by Washington and Tehran, Bokaei reiterated a clear anti-US stance, saying “This is a political game for in order to gain concessions and we hope that the government, with the path that it has taken, can show the world the evil nature of America and the dominant system.”