Syria Video: “We’re With US Strikes Not Once But 1000 Times So We Can Be Rid Of Assad” 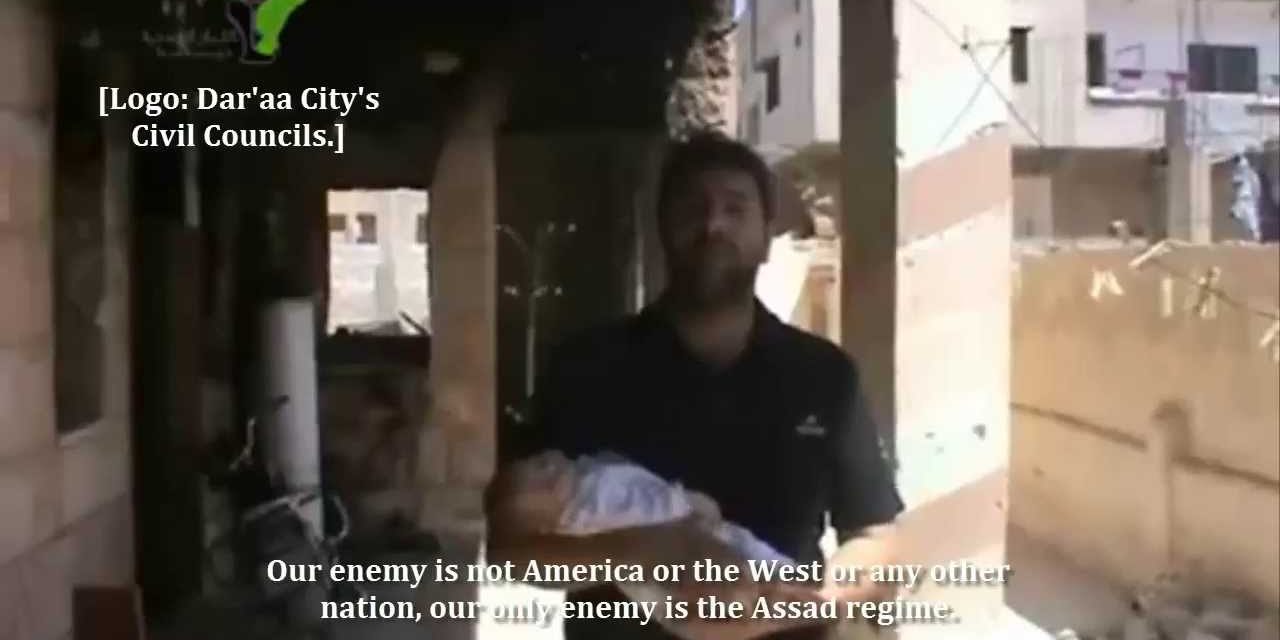 On Saturday, just as US President Obama stalled on military action by referring the matter to Congress, citizen journalists in Daraa City in the south of Syria, and in Babila in the Damascus suburbs, asked local residents what they thought about the possibility of a US strike on Syria.

Most people asked said they were in favor of a strike, if it hit hard against the Assad regime.

In Daraa, people said that a US strike against Assad’s military bases and airfields would help the Free Syrian Army made advances.

In Babila, some residents expressed less trust towards the US, Britain and France but were in support of a strike, as long as hit Assad’s military bases and helped the FSA. One man says that the FSA should take advantage of a strike — which they failed to do in the past when Israel bombed the Jamraya military facility in Damascus.

A local man, who holds a small baby, says: “We are with this strike not once but rather a thousand times so that we can be rid of this enemy, the Assad regime. Our only enemy is Bashar Assad and those with him. The only enemy. Our enemy is not America or the West or any other nation, our only enemy is the Assad regime. Isn’t is a shame for children to live without a mother, father or anything else? Isn’t it a shame that these children are without milk and have become like air? Isn’t it a disgrace?”

Man 2: “We are with the American strike against Bashar Assad to destroy him and his militias completely, as well as all of his military bases. We support this strike, God willing. This strike, like you said, is like when they hit Jamraya [military facility in Damascus] during an Israeli air raid, it was a golden opportunity where the revolutionary fighters could’ve advanced but they didn’t take advantage of it.

Man 5: “We hope that the military strike by the West, Obama and the American army and the alliance will be backbreaking in such a manner that it topples the regime and relieves the Syrian people. We also hope it will be concentrated on the air bases, security branches and command bases so that the Free Syrian Army can advance.”


Abu Yasir [local resident]: First of all, America, Britain and France — all of them — are not trustworthy. Our trust is first in God. If the strike happens them maybe, God willing, it will be the final strike, the strike that takes [the Assad regime] out. Maybe then the [FSA] here can go finish off the rest of the bases and our affairs will be solved. But we don’t hope for anything good from them [the US] because they never wished well for Muslims, the Arab world or anyone else.

Man: I’m sure this strike was planned with consideration for the revolutionary fighters’ attacks and their advancements on the front lines. Also, to shake up the [regime] army and the Hezb al-Shaitan [“The Devil’s Party” — Hezbollah]. All of them are leaving forever, they’re all going to be gone.

Man 2: I hope that instead of the US strike, that this man [Assad] who’s ruling us and all the oppressors get out of the country, along with his [Assad’s] supporters and forces. But if Assad continues to hit us with chemical weapons and things like that, and continues to kill children and women and rape our women, then I do hope that they [the US] strike and maybe afterwards we’ll be able to live in peace!