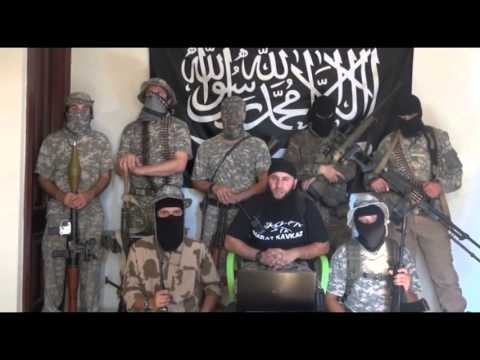 This six-minute video in Russian, posted on July 31, is a message to Russian-speaking Jihadists and Muslims in the Caucasus. The statement is delivered by a man named as Salakhuddin, who is named as the commander of a battalion called Az Zubair — likely from the predominantly Russian-speaking Jaish al-Muhajireen wal Ansar (Army of Immigrants and Helpers), although this is not specified.

Salakhuddin, who speaks Russian with an accent, comments on the influx of Russian-speaking Jihadists to Syria, criticizing them fighters for not staying in the Caucasus and waging Jihad at home.

Addressing the Chechen Jihadi leader Dokka Abu Usman, Salakhuddin frames Jihad as a global fight against the “infidels”, but declares that it is more important for Chechen and Russian-speaking fighters fight the “Russian infidels” at home before traveling abroad.

In the name of Allah, the Merciful, the Compassionate!

Praise be to Allah, the Lord of the Worlds. Peace and blessings be upon His Messenger, his family, his companions and all those who follow him until the Day of Judgment, and after …

Assalamu Alaikum wa Rahmatullahi wa Barakatuh [May the peace, mercy and blessings of Allah be upon you].

First of all, we congratulate our fellow Muslims of the Caucasus, the Crimea, Idel-Ural, Siberia and other Muslim lands occupied by Russian invaders [on the occasion of ]the holy month of Ramadan.

Congratulations on this blessed month to our Emir Dokka Abu Usman and his associates, who have labored on the path of jihad for many years.

We pray that Allah not give us trials that are beyond our strength, and to strengthen our spirit in the fight against unbelief and unbelievers.

Recently, the youth spread rumors that they must to go to Syria to wage Jihad, and here today, there is a large influx of volunteers.

Yes, here in Syria it’s easier right now to wage Jihad than in the Caucasus. There territory to be reclaimed from the infidels, there is a rear, there is a front and we’ve got captured weapons, including guns, mortars, anti-aircraft guns, BMPs, and so on.

Living conditions here are also much easier than in the Caucasus Mountains.

But, the truth is that even with all that, there are more victims in the ranks of the Mujahideen here.

I do not want to talk a lot on this matter, but I will say one thing to the brothers — you can’t leave somewhere where there is Jihad and choose other places without good reason. It is said in the Quran:

O you who have believed, fight those adjacent to you of the disbelievers and let them find in you harshness. And know that Allah is with the righteous. [Surat At-Tawbah]

What can be more respectful than Jihad in the Caucasus? Moscow and the Russian infidels have fought against Islam and Muslims for centuries. And before you change the field of Jihad, dear brothers, let everyone have an justification before Allah.

And at the end of the day, prepare for the so-called “Olympic Games in Sochi.” This is a concrete order from our Emir Dokka Abu Usman.

Here I have to say, to make such a Jihad, do not form into larger units and battalions. It’s enough to have one to three people who prepare a task for themselves, select a goal and work hard and patiently to go to achieve it.

As our dear brother the Martyr Shamil Basayev [https://en.wikipedia.org/wiki/Shamil_Basayev ] said: “… modern technology allows one person to cause irreparable damage to the infrastructure of an enemy state.”

And in the final analysis, we would like to give advice to ourselves first of all, and then to our brothers.

Before embarking on any business, perform the Namaz [prayer] . Do nightly prayers, do a lot of dhikr [“remembrance of God] and then go to work, trusting in Allah.

From bitter experience we know here as soon as we have faltered in ibadah [worship, obedience with submission], we suffered failures. And no matter how many weapons and people we have, it is not conducive to success.

On the contrary, when we were doing a lot of dhikr, night prayers, when we ask Allah for help night and day, then in just a few hours with the help of Allah we conquered territory and objectives that had stood against us for months.

Keep a clean, clear, well-thought-out and detailed plan. Do not share your plans with each “good friend.” Otherwise the whole thing will be ruined, you won’t even be able to start it. Let your words and conversations are not get in the way of action.

So by mercy from Allah , [O Muhammad], you were lenient with them. And if you had been rude [in speech] and harsh in heart, they would have disbanded from about you. [Surat ‘Āli `Imrān 3 159]

Those to whom hypocrites said, “Indeed, the people have gathered against you, so fear them.” But it [merely] increased them in faith, and they said, “Sufficient for us is Allah , and [He is] the best Disposer of affairs.” [Surat ‘Āli `Imrān 3 173]