Syria Round-Up, Sept 30: Up to 50 Insurgent Groups Merge Near Damascus 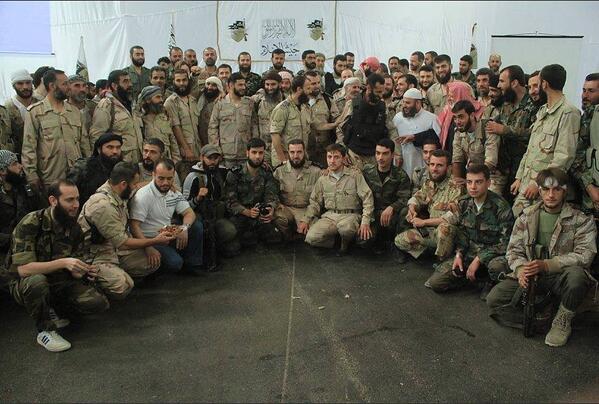 Russia Spotlight: Lavrov — “Our Relationship With The U.S. Is Far Greater Than Any Grievances”

Spotlight: Assad Tells Italian TV “We Will Hold Talks With Opposition, But Not Armed Groups”

SUMMARY: Up to 50 insurgent groups, led by the faction Liwa al-Islam, merged in a ceremony on Sunday.

The commanders (pictured above) vowed to work together throughout Damascus Province to defeat the Syrian military.

Liwa al-Islam is one of the largest and best-armed factions in the insurgency. Part of the Syrian Islamic Liberation Front, it has been based in Damascus suburbs such as Douma and Eastern Ghouta. It has claimed responsibility for major operations, such as the July 2012 bombs in Damascus that killed Defense Minister Dawoud Rajiha, Deputy Defense Minister Asef Shawkat, and Assistant Vice President Hassan Turkmani.

The merger is the second major development within the insurgency in six days. Last Tuesday, 13 groups — including Free Syrian brigades and the leading insurgent factions Ahrar al-Sham and Jabhat al-Nusra — renounced the authority of the Supreme Military Council and the Syrian National Coalition.

Russian-language pro-jihad sources are reporting fighting between the Islamic State of Iraq and Ash Sham and Kurdish PKK fighters in the village of Al Yusufiyah in Hasakah Province in northeastern Syria.

There have been several reports of fighting between Islamist groups ISIS and the Jaish Al Muhajireen Wal Ansar — whose leader, Abu Umar Al Shishani, is also the Amir of ISIS in the north of Syria — and Kurdish factions.

Kavkaz Center, a Russian-language, pro-jihad website based in the Caucasus, on Saturday tweeted this photograph of the leader of the Jaish Al Muhajireen Wal Ansar (Army of Emigrants and Helpers), Abu Umar Al Shishani (Abu Umar the Chechen).

There have been rumors — spread by Kurdish factions — that Abu Umar was killed last week in a battle against the Kurdish PKK on the Turkish border with Idlib Province. However, the two major Russian-language Chechen-based pro-jihad sites, FiSyria and Kavkaz Center, have not reported Abu Umar’s death, though they have reported on the battle in and around the village of Āţimah, in Idlib Province.

Regime forces intensified artillery and rocket shelling on Daraa Al Balad and Tareq Assud neighborhoods of Daraa throughout Monday. The bombardments come after insurgent forces from the FSA and Islamist factions captured the Old Customs Area in Daraa Al Balad on Sunday.

Footage filmed in Raqqa on September 22 (English subtitles) shows local volunteers filling 60,000 backpacks donated by UNICEF for local schoolchildren. The bags are being filled with school supplies, ready for the start of the new school year.

Footage shot by activists in Homs on Monday documents the extensive destruction caused by ongoing regime shelling on the town`s residential areas: 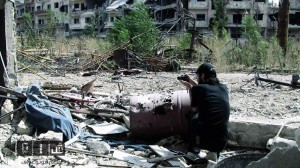 Activists on Monday report that regime shelling continues intermittently on the old city, Al Qusoor and Jurat Ashayyah districts, amid clashes between Assad’s forces and the FSA.

Report: France Was Preparing for Airstrikes When Obama Changed Mind

A report in France’s Nouvel Observateur further reveals how President Obama, only hours after his Secretary of State John Kerry signalled that airstrikes on Syria were imminent, changed his mind on 30-31 August.

Kerry had used a press conference on 30 August to say that the US would not wait for United Nations approval before acting. However, that evening President Obama took a walk in the White House Rose Garden and then convened advisors to say he was approaching Congress for approval. The decision was announced the next day.

The French report — summarized in The Independent — explains how Paris, unaware of Obama’s shift, was proceeding with the preparations for military action:

French President Francois Hollande called off military strikes against Syria on 31 August following a phone call from the US President only hours before fighter jets were set to take off….

President Obama announced in a televised speech on 31 August, after informing a “stunned” Mr Hollande, that he would seek a Congressional vote, effectively lifting the military threat.

Rafale aircraft were readied that Saturday for take-off and official statements prepared in anticipation of the strikes, according to the Nouvel Observateur. “Everything made us think that D-Day had arrived,” a French official is quoted as saying.

The magazine said that “this incredible misunderstanding lasted until the end of the afternoon,” at 6.15pm, when President Obama telephoned Mr Hollande, who was expecting to confirm the military orders just after the phone call. The strikes had been intended to start at 3 a.m. later that night, targeting missile batteries and command centres of the 4th Armoured Division in charge of chemical weapons.

But instead of confirming that the US and French military would intervene jointly, President Obama changed his mind following a conversation in the White House Rose garden with his chief of staff Denis McDonough.

The regime on Monday is continuing its offensive against multiple locations in the Damascus suburbs, with both artillery strikes and tanks.

The FSA says that pro-Assad forces planted the device.

In an interview aired on Sunday night, US Secretary of State John Kerry maintained the line that President Assad has no right to lead Syria, even as Washington is proceeding with a deal which keeps Assad in power as he hands over chemical weapons stocks.

I believe Assad has lost all moral authority by which any person governs a nation. How can you gas your own people? How can you lob missiles for two years into universities and hospitals and kill innocent women and children and then turn around and say, “I’m the guy who ought to govern you”?

Pressed over the US deal on chemical weapons — “You need him to stay in power” — Kerry maintained that the threat of force had pushed Assad into the agreement. He then gave credit to the Russians “for making a huge difference”: “We thank them and congratulate them.”

The Secretary of State did not explain how this would lead to Assad’s departure from power beyond declaring, “If he really cares about his country, he will not run again [for President]. If he were to make that decision, the entire ingredients of Syria would change overnight.”

Instead, he declared, “I can assure you this President of the United States is not going to take off the table unilaterally any prerogative that a Commander-in-Chief has.”

The Local Coordination Committees claim 77 people were killed on Sunday, including 35 in Damascus and its suburbs and 14 in Raqqa Province.

The Raqqa total includes at least 10 people, most of them students, slain when a regime airstrike hit a high school.

The Violations Documentation Center puts the number of dead at 74,405 since the conflict began in March 2011, an increase of 126 from Sunday. Of the dead, 55,651 are civilians, a rise of 77 from yesterday.