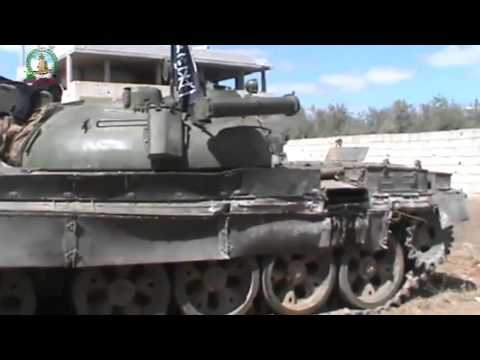 SUMMARY: Reports and videos confirmed on Saturday that insurgents have won a notable victory in southern Syria, taking the Daraa-Ramtha crossing on the border with Jordan.

If the crossing is held, it establishes a line for supplies for opposition fighters to bolster their fight in the south. Regime airstrikes and shelling failed to shift the insurgents yesterday.

Significantly, the victory was also testament to continued co-operation between disparate factions. Brigades of the Free Syrian Army fought alongside units of the Islamist groups Ahrar al-Sham and Jabhat al-Nusra in the victory.

The development does give another challenge to the US, however.

Washington has wavered for months over whether to provide significant supplies and arms across the Jordanian border to the insurgency. It now faces the possibility that Jabhat al-Nusra — a group it has labelled terrorist — will be a presence on that border.

Activists report regime shelling in the Al Sakhour neighborhood in Eastern Aleppo, with several civilians wounded, amid clashes between regime forces and Free Syrian Army fighters on the outskirts of the neighborhood.

Sakhour links several major roads in Aleppo, including a road leading to the city’s airport and another that leads to the north.

There have also been regime airstrikes in the Tariq Al Bab neighborhood, an area controlled by Islamist insurgent factions.

Elsewhere in Aleppo Province, insurgents on Sunday shelled regime positions in the Shia village of Zahra.

Insurgents are continuing to attack the Kuwairis military air base with handmade rockets.

Photojournalist Murhaf al-Modahi, known by the pseudonym Abu Shuja, has been killed by shelling in the eastern city of Deir Ez Zor.

A colleague said al-Modahi was caught in Saturday’s fighting between insurgents and Syrian troops.

The opposition Syrian National Coalition said he “picked up a camera and started documenting (the Syrian revolt) as soon as the first protests broke out in Deir Ezzor….He continued to work under the bullets, bombs and tank shells, defying the regime’s military might.”

A copy of a letter on the Internet is reportedly an ultimatum by the Islamic State of Iraq and as-Sham to members of the Free Syrian Army’s Northern Storm Brigade to “repent” and give up their arms within 48 hours.

ISIS clashed with Northern Storm earlier this month in Azaz earlier this month, killing several fighters and taking over the town near the Turkish border. Efforts at a cease-fire have foundered, reportedly because of ISIS’s refusal to give up its positions.

Forty-four insurgent groups, led by the faction Liwa al-Islam, have declared a unified front to fight in Damascus Province.

The new force will be called Jaish al Islam (The Army of Islam). 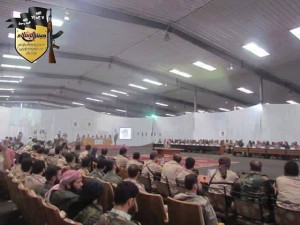 The Halab News Network have published this video of young boys in a madrassah in Aleppo, undergoing what they describe as a military drill.

Claims are circulating that at least nine people were killed on Sunday when a regime airstrike hit a high school in Raqqa Province.

Sources in the Caucasus report that the predominantly Russian-speaking foreign jihadist faction Jaish al-Muhajireen Wal Ansar — which is led by an ethnic Chechen, Abu Umar Al Shishani — have been battling with fighters from the Turkish PKK in Idlib Province, on the border with Turkey.

According to Kavkaz Center, Jaish began battling with PKK fighters around September 25, near the village of Āţimah on the Turkish border.

There was a ceasefire between the two groups, but the Kurds violated it and captured an area of high ground above Āţimah, from where they began firing on Jaish.

In response, Jaish sent a unit to storm the high ground, driving the PKK back. The sources say that around 25 Kurdish PKK fighters were killed, along with five Jaish fighters, including two Chechens, a Bosnian and two from Turkmenistan. By September 26, Jaish had regained control of the area around Āţimah.

The Local Coordination Committees claim 70 people were killed on Saturday, including 28 in Damascus and its suburbs and 18 eighteen in Daraa Province.

The Violations Documentation Center puts the number of dead at 74,279 since the conflict began in March 2011, an increase of 58 from Saturday. Of the dead, 55,584 are civilians, a rise of 35 from yesterday.