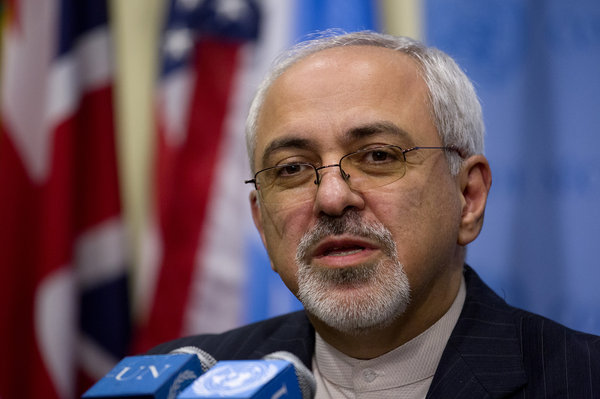 SUMMARY: In an interview on Sunday on a leading US political talk show, Foreign Minister Mohammad Javad Zarif set out the general terms for an agreement on Iran’s nuclear programme.

Zarif set two conditions. The Islamic Republic’s “right to enrich is non-negotiable” and the US must “dismantle its illegal sanctions against Iran that are targeting ordinary Iranians”.

In return, Zarif set out, “We do not need military-grade uranium. That’s a certainty and we will not move in that direction.” Iran’s nuclear facilities would be fully inspected by international observers, monitored by the International Atomic Energy Agency.

The Foreign Minister did not set out the exact level of uranium enrichment that Iran would demand; however, past signals from Tehran have indicated that it will give up its enrichment of 20% uranium in return for a guaranteed supply and the right to enrich up to 5%.

Netanyahu: Rouhani Is A Wolf In Sheep’s Clothing

In a speech to the UN on Tuesday, Israeli Prime Minister Binyamin Netanyahu said that Iranian President Hassan Rouhani is a “wolf in sheep’s clothing”.

Netanyahu starts by talking about the Jewish people’s “odyssey through time”, saying that the Jews have learned two things: never give up hope and

The Israeli Prime Minister said, “Today our hope for the future is challenged by a nuclear Iran that seeks our destruction.”

Netanyahu then returns to his history lecture, talking about the “Persian decree” from Cyrus the Great that allowed the Jewish people return to Eretz Israel and rebuild the
Temple.

“But in 1979, a radical regime in Iran changed all that, crushing the Iranian people’s hope for democracy and chanting ‘Death to the Jews’,” Netanyayu said.

Netanyahu went on to say, “Since then there have been different Iranian presidents but the creed has been the same — espoused by the real power in Iran, the dictator, the Supreme Leader.”

Netanyahu now refers too Rouhani, asking, “What made Rouhani acceptable?” in the Iranian Presidential elections.

Netanyahu called Rouhani a wolf in sheep’s clothing — saying that there has been an extraordinary and startling contradiction between his words and Iranian reality: “Rouhani stood here in the UN and praised Iranian democracy, but Iran executes dissidents. Rouhani talks about the crisis in Syria but Iran directly participates in that massacre — Iran props up the regime that used chemical weapons against its own people.”

The Israeli Prime Minister says, “I wish I could be moved by Rouhani’s call to join his “wave” but the only wave that Iran has created in the last 30 years is a wave of violence and terrorism. I wish I could believe Rouhani but I don’t.”

He answers his own question, “The answer is simple — Iran is developing nuclear weapons.”

“Rouhani was elected because of sanctions, and that is why he launched a charm offensive to get them lifted — but he does not want to stop Iran’s nuclear program. He pays lip service to peace and democracy and offers meaningless concessions in return for lifting sanctions and wants Iran to keep sufficient nuclear infrastructure to race to the bomb….Why does Rouhani think he can get away with this? Because he has gotten away with it before — his strategy of talking a lot has worked in the past. He even brags about it.”

Netanyahu now talks about the Isfahan nuclear facility, saying that Rouhani boasted of creating a calm environment that allowed Iran to build this facility.

The Prime Minister quips, “Rouhani thinks he can have his yellowcake and eat it.”

Netanyahu now talks about North Korea and says Iran would be “50 times worse”.

“Iran’s fanaticism is not bluster, it is real. This fanatic regime must never be allowed to arm itself with a nuclear weapon. We know all too well the costs, history has taught us that if you want to prevent war tomorrow you must act today,” he continues, asking: “Can diplomacy solve the problem by dismantling Iran’s nuclear program? It would require Iran to do four things: cease all uranium enrichment, remove all enriched uranium, get rid of its nuclear facilities and stop all work on its heavy water reactor. These steps would put an end to Iran’s nuclear program.”

The Israeli Prime Minister now warns that a reduction of the sanctions would not work.

“There are those who would agree to leave Iran with the residual capacity to have a nuclear program. But a country with a capacity to enrich uranium to 3% can also enrich it to 90% and create nuclear program. This is why Iran’s nuclear weapons program must be fully dismantled.”

Netanyahu warns, “Don’t agree to a partial deal, which would lift international sanctions, in return for symbolic concessions that would take Iran weeks to reverse. Only lift the sanctions when Iran agrees to dismantle its nuclear weapons program completely.”

“Israel will never acquiesce to nuclear weapons in the arms of a rogue regime. In the face of this threat Israel will defend itself. If Israel is forced to stand alone, Israel will stand alone. And in standing alone Israel will know that it is defending many, many others.”

Solving the nuclear issue…can be an important solution to mending the relations between two countries…There is an opportunity for diplomacy and we hope that the Iranian government uses it. We welcome the change in tone, but as always we say there is a big difference between words and action….

The U.S. and P5+1 [5+1 Powers] are ready to answer Iran’s trust-building actions with the same actions.

MPs Praise Rouhani But Caution Him on Nuclear Issue

Mixed signals from MPs over engagement and nuclear talks….

About 200 of the 290 members of the Majlis have signed a motion praising President Rouhani’s “intelligent positions” during his trip in New York.

However, Alaeddin Boroujerdi, the chairman of Parliament’s National Security Commission, has cautioned Rouhani that the Majlis will not approve accession to the Additional Protocols of the Non-Proliferation Treaty.

Iran observed the Protocols between 2003 and 2006 but they were never ratified by Parliament. US Secretary of State John Kerry said last weekend that Washington would demand Tehran’s acceptance of the Protocols in nuclear discussions.

The Revolutionary Guards may have given public support to President Rouhani’s engagement while he was in the US — provided he defends Iran’s interests vigorously — but the head of the Guards, Mohammad Ali Jafari, has put out a warning:

The view of Ayatollah Khamenei is somewhat different from that of some officials today. Relations with the enemy and the discussion of endurance and resistance are things over which the Supreme Leader and some officials have a difference of view.

Jafari then threw another jab at Rouhani, using the precedent of the 1980s Iran-Iraq War: “The issue that certainly became clear is that if the administration had supported more completely the front line, we would not have had encountered as many problems.”

The Islamic Republic’s oil exports had already been halved in 2012, with its customers reduced to six countries, almost all in Asia.

Western sanctions have forced China, India, Japan and South Korea to reduce their reliance on Iranian oil, more than halving the OPEC nation’s exports since early 2012 and costing it billions of dollars a month in lost revenue.

The four major Asian buyers imported 927,860 barrels per day (bpd) of Iranian crude in the first eight months of this year.

After a drop through July, exports did rebound to 865,650 bpd of Iranian oil in August, up nearly a third from a year earlier. However, the rise was mainly due to South Korea — in August 2012, Seoul bought no Iranian oil because of European Union restrictions on shipping insurance.

Rouhani Orders Study of Resumption of Direct Flights to US

According to Hassan Rouhani’s senior advisor Ahmad Torkan, the President has asked authorities to study the possibility of resuming direct flights to the US.

The flights were halted soon after the 1979 Islamic Revolution.

Iran has begun paying overdue amounts on loans from the World Bank.

In July, the Bank announced that Tehran had not made payments for more than a year.

The Bank does not have a current program for Iran. The Islamic Republic owes $616 million for past loans.

How Iran By-Passes Sanctions With Investment in Turkey

The Turkish daily Today’s Zaman offers an example of how Tehran can by-pass US-led sanctions:

Iran is using a broker in Dubai to invest in the transportation sector and thus find alternative routes into world markets….

A businessman of Iranian origin in Dubai has started to invest in Turkey’s transportation sector on behalf of another Iranian businessman, Babak Zanjani, whose name is blacklisted by EU and US sanctions….

[The] businessman from Dubai, Mahdi Shams, increased his investments in the Turkish transportation sector by buying Onur Air, a private Turkish airline company, for $250 million, and half of the shares of Ulusoy-Varan, a land transportation business, for $100 million. After buying seven of Onur Air’s aircraft, Shams delivered them to Zanjani’s Iranian company, Qeshm Airlines.

US Secretary of State John Kerry said Sunday that an agreement over Iran’s nuclear program could reached even sooner than the timetable of 3 to 6 months proposed by President Rouhani and Foreign Minister Zarif.

“It’s possible to have a deal sooner than that — depending on how forthcoming — and clear Iran is prepared to be,” Kerry said on US CBS Television.

We need to have a good deal here. And a good deal means that it is absolutely accountable, fail-safe in its measures to make certain this is a peaceful program.

“If it is a peaceful program, and we can all see that — the whole world sees that — the relationship with Iran can change dramatically for the better and it can change fast.

Kerry said a deal would include inspection of the Fordoo nuclear facility — which Iran already allows — signature of the Additional Protocol to the Non-Proliferation Treaty, and suspension of the “higher-level” (20%) enrichment of uranium.

Iran observed the Additional Protocol from 2003 to 2006 but its Parliament never ratified the accession.

Kerry said sanctions would only be lifted after a “transparent” and “verifiable” agreement had been reached.