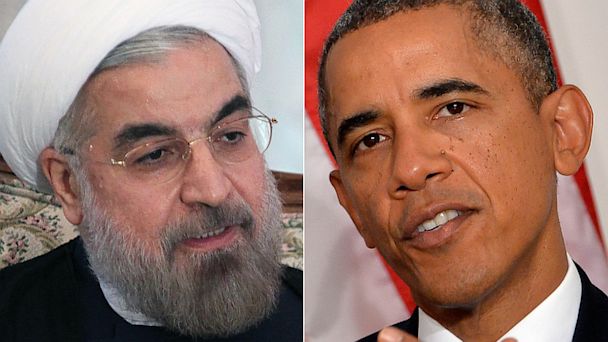 Video Analysis: Hope for the Nuclear Talks? — A 4-Point Guide

Analysis: Why Tehran — Including Its Hard-Liners — Is Serious About Nuclear Talks

SUMMARY: President Obama spoke by telephone with President Rouhani on Friday afternoon, the first direct conversation between US and Iranian leaders since the takeover of the American Embassy in Tehran in 1979.

The men spoke as Rouhani was en route to the airport in New York after his appearance at the United Nations and a series of press confererences and interviews.

In a phone conversation b/w #Iranian & #US Presidents just now: @HassanRouhani: "Have a Nice Day!" @BarackObama: "Thank you. Khodahafez."

In phone convo, President #Rouhani and President @BarackObama expressed their mutual political #will to rapidly solve the #nuclear issue.

(Rouhani or his office was even more effusive on Twitter, but later deleted some of the messages without explanation.)

Obama told reporters that the call was a major breakthrough:

“The test will be meaningful, transparent and verifiable actions, which can also bring relief from the comprehensive international sanctions that are currently in place.

Resolving this issue, obviously, could also serve as a major step forward in a new relationship between the United States and the Islamic Republic of Iran, one based on mutual interest and mutual respect.

A path to a meaningful agreement will be difficult. And at this point both sides have significant concerns that will have to be overcome. But I believe we’ve got a responsibility to pursue diplomacy and that we have a unique opportunity to make progress with the new leadership in Tehran.

Obama then tried to reassure West Jerusalem “Throughout this process, we’ll stay in close touch with our friends and allies in the region, including Israel,” before saying,
“I do believe that there is a basis for resolution.”

The US President cited Rouhani’s comment that Iran will not develop nuclear weapons and declared his own “respect” for “the right of the Iranian people to access peaceful nuclear energy”.

While the world has been watching President Rouhani in New York, a major development in Tehran….

After more than 31 months under strict house arrest, Mehdi Karroubi — opposition leader, 2009 Presidential candidate, and former Speaker of Parliament — has been freed to see his family:

#Karoubi son: while having dinner 4 dad's bday & my daughter's 1st week of college, heard door bell & dad was there. pic.twitter.com/rxtOk74Uxr

Rouhani News Conference: “Quite Different Atmosphere” For Relations With US

The headline from President Rouhani’s press conference in New York on Friday is his declaration that “the atmosphere” for Iran-US talks “is quite different from the past”.

The President continued with his line of engagement, “Our goal is the shared interest between the two nations. Our goal is resolving problems, our goal is step-by-step creating trust between the governments and peoples.”

Anticipating next month’s nuclear talks with the 5+1 Powers, Rouhani expressed hope they “will yield, in a short period of time, tangible results”.

On Syria, the President held to his generic line:

We must walk hand in hand to end war. People of Syria must decide their own future in safety….

We oppose foreign intervention and foreign forces in the region. We would like to participate in a Geneva 2 [international peace] conference.

President Rouhani, continuing his PR tour of the US, spoke at the Council on Foreign Relations on Thursday night.

His remarks on the nuclear issue paralleled the optimism of the Kerry-Zarif meeting in New York:

We agreed to jumpstart the process so that we could move forward with a view to agreeing first on the parameters of the endgame, how we want to proceed with Iran’s nuclear program in a year’s time, and also to think about steps starting with a first step that should be implemented in order to address the immediate concerns of two sides, and move towards finalizing it, hopefully within a year’s time.

On Syria, he again avoided blame of either side for the use of chemical weapons while linking his concern on the issue to Iran’s security:

Representing a people who experienced the horror of chemical weapons, my government strongly condemned the use of chemical weapons in the ongoing conflict in Syria. I’m also concerned about the breeding ground created in parts of Syrian territory for extremist ideologies and rallying points for terrorists, which is reminiscent of the situation in another region adjacent to our eastern borders [Afghanistan and Pakistan] in the 1990s.

And he spoke once more about the Holocaust, without using the specific word and implicitly linking it to the Palestinian issue:

I think that I have responded in one or two interviews in which I was asked about it and I explained that we condemn the crimes by Nazis in the World War II and regrettably those crimes were committed against many groups, many people, many people were killed including a group of Jewish people. And we condemn their crimes.

In general, we condemn the murder and killing of innocent people always. It makes no difference to us. When that person is innocent and is killed, whether he or she was Jewish, or Christian, or Muslim, there’s just no difference in our eyes. We condemn crimes as such.

But the argument here is that if the Nazis committed a crime, this does not mean that the price paid for it should be done by other people elsewhere. This should not serve as any justification to push out from their homes a group of people because of what Nazis did.

The possibility of productive talks between the US and Iran on Tehran’s nuclear program grew on Thursday, as Secretary of State John Kerry and Iranian Foreign Minister Mohammad Javad Zarif joined representatives of the 5+1 Powers (US, Britain, France, Germany, China, and Russia) at the United Nations.

Both Kerry and Zarif described the session — the first time US and Iranian ministers had been at the same table since 2004 — as “constructive”.

Zarif said, “”We hope to be able to make progress towards resolving this issue in a timely fashion based on respecting the rights of the Iranian people to nuclear technology for peaceful purposes, including enrichment. And, at the same time, making sure that there is no concern at the international level that Iran’s nuclear program is anything but peaceful.”

There’s a lot of work to be done, so we will engage in that work obviously and we hope very, very much — all of us — that we can get concrete results that will answer the outstanding questions regarding the program.

The two men also had a 30-minute bilateral meeting after the discussion in the 5+1 session. A senior US official claimed, “The secretary [Kerry] leaned over [to Zarif] and said, ‘Shall we talk for a few moments?'”

We stressed the need to continue these discussions to give it the political impetus that it requires, and hopefully to reach a conclusion in a reasonable time.

I’m satisfied with this first step. Now we have to see whether we can match our positive words with serious deeds so that we can move forward.