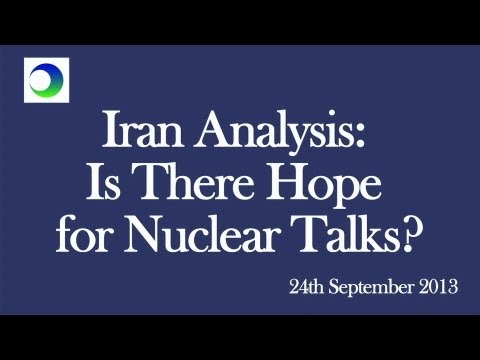 Presidents Obama and Rouhani have delivered their speeches at the United Nations. US Secretary of State John Kerry and Iranian Foreign Minister Mohammad Javad Zarif are meeting for the first time, at a discussion with representatives of the 5+1 Powers (US, Britain, France, Russia, China, and Germany).

So what should we look for now, before next month’s high-level nuclear talks in Geneva?

“Watch carefully for what the Iranians do over ‘engagement’ and ‘reciprocity’. Watch the Americans: will they give a signal that talks will be two-way, with easing of sanctions and respect for Iran’s right to enrich uranium. Watch for the brokers in between: Russia and the European Union”

2. WHAT WILL THE AMERICANS DO?

“For these talks to succeed, the Americans must talk about ‘reciprocity’ and a genuine deal of limiting Iran’s uranium enrichment to 5% in return for a real lifting of sanctions.”

3. WATCH FOR A US BACKLASH

“Look for voices within the US, in Congress and elsewhere, to hit back at ‘engagement’ over the next few weeks. Look for the scare stories — indeed, some of these are already out.”

4. WATCH FOR AN IRAN BACKLASH