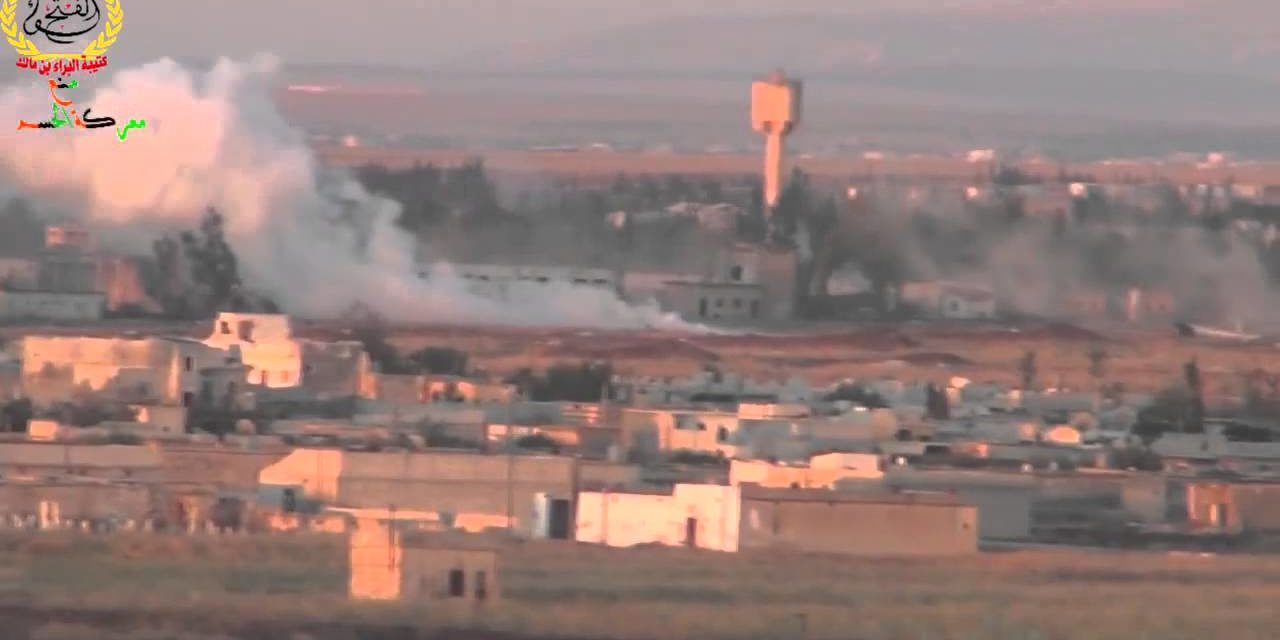 LATEST: Fleeing Regime Tanks Try to Get To Kurdistan, Fail

A good week for the insurgents on the military front — countering the regime’s offensive in Homs — continued on Monday.

Following the launch of an offensive taking territory and offering a symbolic show of power in northern Lattakia Province in western Syria, opposition fighters may have claimed a bigger prize: Menagh Airbase, one of the regime’s last significant positions in Aleppo Province.

We offer an analysis, “Assessing the Fall of Mennegh Airbase“, which notes the importance of the capture, if confirmed. President Assad’s are increasingly constricted in northern Syria, finding it more difficult to move personnel and supplies, and the insurgency’s siege of the biggest prize — Aleppo, Syria’s biggest city locked in military stalemate for 13 months — is tightening.

At the same time, the news offers two cautions: 1) the victory, due to certain brigades and not others, points to multiple and sometimes conflicting “insurgencies”; and 2) the regime still has a lot of power to inflict damage on both fighters and civilians throughout the north, as Monday’s footage of shelling in Idlib Province testified.

And while the insurgency claimed further advance in its Lattakia offensive, saying that it took two villages on Tuesday, the Syrian military also has its own victories to parade: reports on Tuesday — as the Minister of Defense walked through the recently-recaptured Khalidiya section of Homs — indicated that the regime may have taken the al-Wa’er area of the city.

Fleeing Regime Tanks Try to Get To Kurdistan, Fail

At Least 18 Killed in Jaramana, South of Damascus, by Car Bomb

State news agency SANA claims 18 people, some of them children, were killed and dozens wounded by a car bomb in Jaramana, south of Damascus.

Jaramana, an area considered largely supportive of the regime, has been hit by a series of car bombs in the past year.

The Local Coordination Committees said at least one person was killed and many others wounded.

Insurgents took control of most of the Yarmouk camp earlier this year.

Footage of the FSA head of Aleppo’s Military Council Abdul Jabbar al-Oqaidi speaking from Menagh Airbase near Aleppo on Tuesday, after insurgents took control of the base. Beyond the confirmation of an insurgent victory in Menagh, what is significant about this footage is that among those with al-Oqaidi is an ISIS commander, Abu Jandal who speaks after him, indicating at least some degree of cooperation and coordination between the FSA and the Islamist faction during the offensive.

Video: Women and Children Run From Regime Shelling in Houla in Homs Province

Insurgents have continued their advance in the third day of an offensive in northern Lattakia Province in western Syria.

The opposition brigades, mostly Islamist in the co-ordinated attack, moved south to the outskirts of the Alawite village of Aramo, 20 kilometers (12 miles) from Qardaha.

Qardaha is the ancestral home of President Assad.

Footage of insurgents on the front line:

Regime Tries to Pay For Food From Funds Frozen Overseas

In a possible of growing difficulties over food supplies, Syrian State firms are trying to access frozen funds in foreign bank accounts to purchase stocks including wheat.

In recent weeks Syrian state buyers have issued a series of tenders for more than 500,000 tons of wheat, sugar, and rice.

The tenders say payment will be made from thefrozen accounts, using waivers obtained from countries that have imposed financial sanctions.

Trade sources said some of the frozen bank accounts are located in European countries including France and Italy.

In a tender for 276,000 tonns of white sugar, reviewed by Reuters, Syria’s General Foreign Trade Organization said it was presented due to “extreme urgency” for supplies.

Journalist Jenan Moussa reports on a claim over the fate of Syrian troops fleeing the Menagh Airbase when it fell:

YPG spokesman confirms 2 me regime soldiers fled 2 kurdish areas from Mennegh. 'We arrested them, have now 2 of their tanks' he adds. #Syria

Claimed footage from Tuesday shows crowds and congestion at the Garage Al Hajz checkpoint in Aleppo’s Bustan Al Qasr neighborhood. Every day, around 10,000 people use the checkpoint — the only crossing between the regime- and insurgent-controlled areas of Aleppo. Most of the people who use the crossing do so to shop for basic items.

Footage posted by activists on Tuesday claims to show use of a phosphorous bomb dropped by regime forces on insurgents in the Menagh Airbase.

There are reports that insurgents have renamed the captured Menagh airbase, ‘Martyr Ammar Dadyka Airport’, in honor of the former Commander of the FSA’s Northern Storm brigade, who was killed in the siege of the airbase.

If accurate, the reports signal that the FSA have moved quickly to stamp their authority not just over the airbase but over the narrative of its capture, showing that they — and not non-FSA factions like the Islamic State of Iraq and As-Sham — led the siege.

Insurgents from the Saad Bin Abi Waqas in Daraya filmed a series of videos in response to last week’s visit by Syrian President Bashar al-Assad to Daraya in the Damascus countryside.

The footage the insurgents shot shows an FSA commander, named as Abu Shahin, showing different areas in Daraya. Abu Shahin explains that although the visit by Assad was intended to show that the regime were in control of the town, he only came to its very edge.

This is the first of the videos; the rest are available on the brigade’s Facebook page.

Report: Both Free Syrian Army and Foreign Fighters in Capture of Menagh Airbase

An interesting paragraph in The New York Times report on the insurgents’ capture of Menagh Airbase, indicating Free Syrian Army involvement as well as a variety of groups outside the FSA:

The base was first besieged by a Free Syrian Army brigade called North Storm, and joined by fighters from the Islamic State of Iraq and al-Sham and a group calling itself Jaish al-Muhajireen wal Ansar. Muhajireen means emigrants, and the group, which carried out several suicide attacks at the base, is led by Russian speakers from Chechnya and other parts of the Caucasus.

The Syrian Coalition on Tuesday issued a statement praising the Free Syrian Army for its capture of the Menagh Airbase near Aleppo. The Coalition said that the “great victory” had come after “a series of FSA successes. During the holy month of Ramadan, and despite Assad’s appalling massacres against the Syrian people, FSA fighters managed to accomplish a number of achievements on the ground, ushering in the start of a new stage.”

In issuing its statement, the Coalition is attempting to credit the FSA with the operation — though some of the footage of the airbase capture purportedly shows factions not linked to the FSA, most notably the Islamic State of Iraq and As-Sham.

While State media report that regime forces had successfully inflicted losses on insurgent fighters and that all the airbase guards were “fine”, a video posted by activists on Tuesday shows claimed footage of regime troops held captive by insurgents in the airbase:

State Media: ‘All Is Well In Menagh Airbase, Guards Are Fine’

State media on Tuesday brushed aside reports that insurgents had overran the Menagh Airbase in Aleppo, reporting instead that regime forces had inflicted heavy losses on insurgents.

An information source stressed Tuesday that all guard members of Minnegh Airport in Aleppo are fine, adding that the armed terrorist groups are receiving very severe losses around and inside the airport.

“The heroes of our armed forces are confronting the terrorists with matchless valor,” the source affirmed, noting that the Airport is devoid of military equipment and aircrafts as it is not in service.


Videos: The Islamic State of Iraq And As-Sham In Aleppo

Abou El Abidine of ISIS talks to a group of adults and children in Aleppo about making peace:

More footage of a Ramadan event in Aleppo — here, a small girl wrapped in an ISIS flag watches as an ISIS member sings a song:

At the same event in Aleppo, Abu Omar from ISIS (who appears to be wearing a suicide vest) lauds himself for being in the land of As-Sham (greater Syria):

The Local Coordination Committees claim that 110 people were killed on Monday, including 19 children and 16 women.

Of the deaths, 32 were in Idlib Province, 20 in Damascus and its suburbs, 20 in Aleppo Province, and 13 in Daraa Province.

The Violations Documentation Center puts the number of dead at 68,652 since the start of the conflict, a rise of 97 since Sunday. Of these, 52,048 are civilians, an increase of 53 from yesterday.