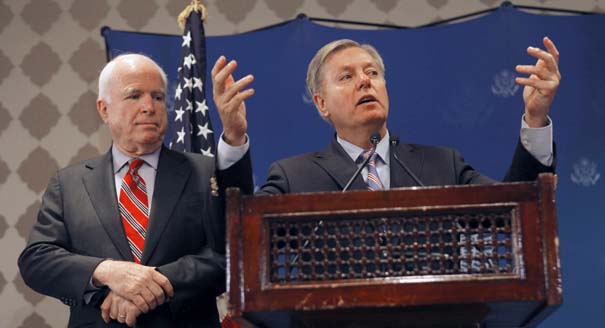 PHOTO: US Senators John McCain and Lindsay Graham in Egypt on Monday

“Official sources” are saying that Egypt’s interim Government will declare that foreign mediation efforts have failed, only 24 hours after the latest high-profile effort.

US Senators John McCain and Lindsay Graham had discussions with military leaders and Government officials on Tuesday, amid international efforts at reconciliation with the Muslim Brotherhood, the major force behind deposed President Mohamed Morsi.

In the past week, the European Union’s Catherine Ashton — who met Morsi — US Assistant of State William Burns, and the Foreign Ministers of Qatar and the UAE have also been involved in initiatives to ease political tensions after the July 3 coup.

According to the official sources, however, the interim Government will declare that pro-Morsi protests are “non-peaceful”, supporting the Government’s announcement last weekend that it has ordered the dispersal of mass sit-ins. The military and Government will also pursue their own “road map” for elections within nine months.

The McCain-Graham visit appears to have backfired, following the announcement of the senators that Morsi’s removal was a coup — a line contrary to that of the Obama Administration — and their call for a release of political prisoners and a national dialogue.

Asked to comment on the report from the Egyptian sources, the State Department put out the statement: “We are still committed to our ongoing efforts at calming tensions, preventing violence and moving toward an inclusive political process.”

Egypt: Prosecutors Drop Charge on One Muslim Brotherhood Leader, Keep Another in Prison

The Egyptian prosecution has ordered the technical release of the leader of the Muslim Brotherhood’s Freedom and Justice Party, Saad El-Katatni, on charges of inciting violence.

El-Katatni will not be freed from imprisonment, however, as he is facing investigation on other charges.

The prosecution also ordered the detention of the Muslim Brotherhood’s deputy leader Khairat El-Shater, for another 15 days on investigation on charges of inciting violence during clashes last December.

Egypt: Prime Minister Repeats That Pro-Morsi Sit-Ins Will Be Dispersed

Speaking at a press conference of the Cabinet, El-Beblawi called on protesters to leave as soon as possible, offering free transportation for those leaving the main sit-ins at Cairo’s Rabaa Al-Adawiya Mosque and Gaza’s Nahda Square.

Last week the interim Government said it had given to security forces to disperse the gatherings for Morsi, overthrown by the military on July 3.

The Prime Minister said the rallies had not yet been broken up out of respect for the holy month of Ramadan, which ends Wednesday.

Yemeni officials have claimed they foiled a plot by AL Qa’eda in the Arabian Peninsula to seize two major oil and gas export terminals and a provincial capital in the east of the country.

Rajeh Badi, press advisor to Prime Minister Mohammed Salem Basindwa, said, “The plot involved using dozens of al Qaeda militants dressed in Yemeni army uniforms to storm the facilities on the night of the 27th of Ramadan [celebrated as the night on which the Qur’an was revealed to the Prophet Mohammed”.

Badi continued, “The plot aimed to seize the al-Dabbah oil export terminal in Hadramout and the Balhaf gas export facility, as well as the city of Mukalla,” the capital of the eastern province of Hadramout.

The press advisor said the plan was foiled by putting security forces on high alert and by tightening entry procedures to the facilities.

The assertion came after US drone strikes killed 10 people in the last two days, and as Washington kept 19 US Embassies closed because of a security alert.

A US drone killed at least six suspected insurgents in southern Yemen on Wednesday, a day after four people died in a strike.

In the attack, the fifth in less than two weeks, at least six missiles were firedat two vehicles in a remote area in Sabhwa Province.

The vehicles were destroyed and residents who rushed to the scene found only charred bodies, officials said.

At least 20 people have been killed since July 28, when a drone strike hit at least four claimed members of Ansar al-Sharia, a local insurgent group affiliated to Al Qaeda in the Arabian Peninsula (AQAP).

Tens of thousands of Tunisians, marking the six-month anniversary of a political assassination, rallied in central Tunis on Tuesday to demand the removal of the Government.

The protest was a response to weekend demonstrations supporting the Government, led by the moderate Islamist Ennadha Party. “The people want the fall of the regime,” shouted crowds in Bardo Square,

The opposition, catalysed by February’s killing of Chokri Belaid and last month’s assassination of fellow leftist leader Mohammed Brahmi, also wants to dissolve the Constituent Assembly, which is close to finishing a draft constitution and election law.

The head of the Assembly suspended the body on Tuesday, saying it would not resume work until the Government and its opponents held talks.

One person was killed and at least 35 were wounded overnight in clashes in Alexandria between supporters and opponents of ousted President Morsi in Alexandria.

Pro-Morsi demonstrators clashed with army supporters in the El-Mansheya neighborhood. Birdshot and live ammunition were reportedly fired, as a bus was torched and shop windows were smashed.