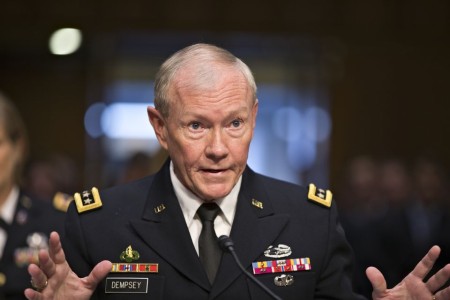 Only hours after the mass killing of civilians in airstrikes by the Assad regime — possibly using chemical weapons — news has broken that the US military has ruled out American intervention, even of a limited nature, in Syria.

In a letter sent on Monday to Congressman Eliot Engel, the Chairman of the Joint Chiefs of Staff, General Martin Dempsey, said the American military is capable of taking out the Syrian air force and shifting the balance of the civil war.

However, Dempsey argued that the approach would plunge the US into another war in the Arab world and offer no strategy for peace, given the fragmented opposition to the Assad regime:

Syria today is not about choosing between two sides but rather about choosing one among many sides. It is my belief that the side we choose must be ready to promote their interests and ours when the balance shifts in their favor. Today, they are not.

Dempsey, who was recently in Israel for discussions, said Syria’s war was “tragic and complex”:

It is a deeply rooted, long-term conflict among multiple factions, and violent struggles for power will continue after Assad’s rule ends. We should evaluate the effectiveness of limited military options in this context.

Dempsey said that US should concentrate on increased humanitarian assistance to bolster a “moderate” opposition as “the best framework for an effective US strategy toward Syria”.

The Obama Administration said in June that it would start overt supplies of weapons to the insurgency; however, some officials quickly pulled back on the commitment. Amid reports that the State Department was pushing for intervention and that the military was firmly opposed — with the White House in the middle — the Administration ruled out any anti-tank or anti-aircraft weapons.

Last week, opposition fighters indicated that there had been no supplies of any kind from the US since the June announcement.

In July, Dempsey warned legislators that the establishment of a no-fly zone to protect the opposition would require hundreds of US aircraft at a cost as much as $1 billion a month, with no assurance that it would change the war’s momentum.

The General also discouraged options such as training insurgents groups, limited strikes on Syria’s air defenses, or a buffer zone for the opposition, stressing the need to avoid an outcome similar to recent conflicts in Iraq or Afghanistan.

We can destroy the Syrian air force. The loss of Assad’s air force would negate his ability to attack opposition forces from the air, but it would also escalate and potentially further commit the United States to the conflict. Stated another way, it would not be militarily decisive, but it would commit us decisively to the conflict….

The use of U.S. military force can change the military balance. But it cannot resolve the underlying and historic ethnic, religious and tribal issues that are fueling this conflict.