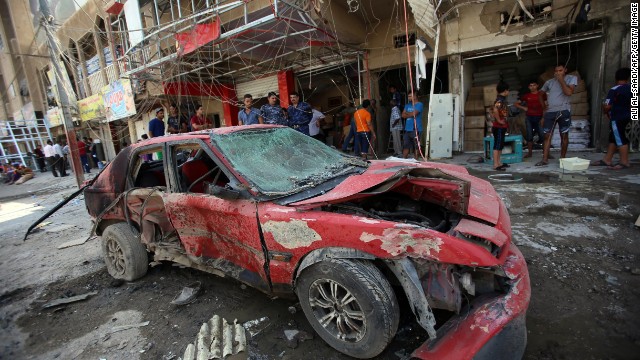 At least 86 people were killed and 263 wounded in car bombings and other attacks across Iraq’s capital Baghdad on Wednesday.

The car bombs struck from early morning to late evening across the south, north, and west of the city.

A man parked his car in front of the restaurant. He got breakfast and drank his tea. (Then) I heard a huge explosion when I was inside the kitchen.

When I went outside, I saw his car completely destroyed and he had disappeared. Many people were hurt.

Wednesday’s violence was the worst since August 10, when nearly 80 people were killed as they observed a religious holiday.

Deaths from violence have climbed sharply since March and, with more than 1000 people killed in July, are at their highest level in five years.

At least 16 people were killed and 24 were wounded on Thursday when a car bomb exploded in a fruit-and-vegetable market in Samarra, north of Baghdad.

The bomb hit as poorer Iraqis were at the market taking advantage of reduced prices as surplus stock was sold before closing.

Attacks elsewhere in Iraq left three others dead: a soldier, a civilian,and a man who was shot dead as he was trying to plant a roadside bomb.

Al Jazeera has protested the detention of four of its staff since Tuesday in Cairo.

Correspondent Wayne Hay, cameraman Adil Bradlow, and producers Russ Finn and Baher Mohammed have been held, following the seziure of Abdullah al-Shami on August as he was covering the deadly raid on the anti-regime sit-in at the Rabaa al-Adawiya Mosque.

Mohamed Badr, a cameraman for Al Jazeera Mubasher Misr, has been held for more than a month.

These arrests are part of what Reporters Without Borders has called “growing hostility” towards journalists in Egypt.

There has also been a campaign against Al Jazeera in particular, as the channel’s offices were raided last month and security forces seized equipment which has yet to be returned.

Al Jazeera calls for the Egyptian authorities to release all our staff unconditionally along with their belongings and equipment.

Britain has suspended 49 export licences to Egypt for military supplies.

“As a result of the developing situation in Egypt, we have agreed with EU [European Union] partners in this instance to go further and suspend all export licences for goods which might be used for internal repression,” Business Secretary Vince Cable said in a statement.

“By acting together, we want to send a clear signal that we condemn all violence in Egypt.”

The suspension will be kept under review until “conditions in Egypt indicate that it is appropriate to lift these restrictions”, Cable added.

Last month Britain withdrew five licences for components for armoured fighting infantry vehicles, communication equipment for tanks, and machine gun parts.
More than 1,000 people, including about 100 police and soldiers, have been killed since the army deposed President Mohamed Morsi on July 3 in the worst internal violence in Egypt’s recent history.