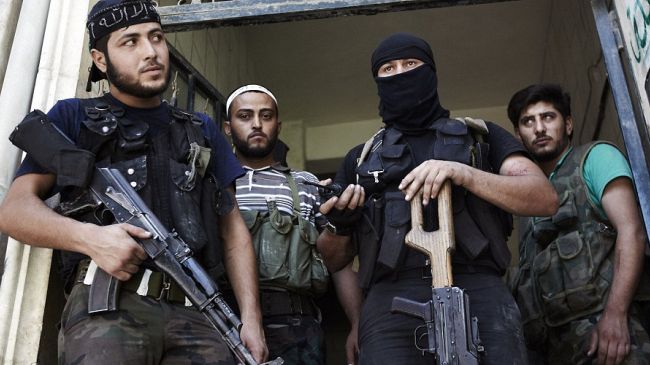 On Thursday, Foreign Minister Mohammad Javad Zarif had some pointed words about the claimed chemical weapons attack near Damascus the previous day: “If the news is correct, the crime has certainly been committed by terrorist and takfiri [heretic] groups, because they have actually shown that they are ready to commit any crime.”

Iranian propaganda in support of the Assad regime is far from a new phenomenon in the Syrian conflict. In recent weeks, however, the declarations have become louder and more shrill — with the specter of the dreaded “takfiri”, a deviant Muslim who turns against other Muslims, suddenly appearing alongside the well-known foreign-backed (and probably Zionist) “terrorist”.

And those declarations now come as the new Rouhani Government is promoting “engagement” with other countries, including the “West”, over issues such as Syria.

Could it be that this “terrorists and takfiri” line — to the point of blaming insurgents for any chemical weapons attack — has come from on high, namely the Supreme Leader’s office? If so, what does that say about Rouhani’s scope for “engagement”?

On Wednesday, as news of the Syrian regime’s assault and hundreds of civilan casualties was coming into full view, Press TV preferred to highlight the remarks of Parliament Speaker Ali Larijani:

The footprint of arrogant currents, particularly the US, is visible in many of the terrorist activities [carried out] by these extremist groups [in Syria].

The quotes from Larijani did not include the T-word, but Press TV made sure it was in the headline, “Takfiri Terrorism Bears US Hallmark“.

While it has used “takfiri” in its reporting for some time, Press TV seems to have emphasized — or been guided to emphasize — the “Takfiri” label from the end of June: “Takfiri Ideology Divides Muslims in US, Israel Favor: Analyst“. Videos declared, “Muslim Clerics Speak against Takfiri Ideology“.

Press TV’s “Analyses” took the label to new — and darkly humorous lengths, as in the proclamation that “Takfiris and Zionists…think they are so much better than other people that they are justified in killing them, sometimes even eating them.”

However, the focus of these articles was not specifically on the Syrian conflict but the wider Middle East, especially Lebanon, as Iran worried about the course of its “Islamic Awakening”.

That line has shifted. Occasional references to “foreign-backed Takfiri militants“, often in connection with the statements of Hezbollah’s Nasrallah and concerns over Egypt, escalated at the start of July into declarations by the Foreign Ministry denouncing foreign support for “armed Takfiri groups“.

And from the end of July, the label was used almost exclusively for Syria, with dozens of articles from reports of the Syrian military fighting “Takfiri militants” in Homs to Western “warcrimes” and “genocide” and the “Takfiri mentality“.

So what to make of all this?

In part, it offers insight into a little-considered aspect of the conflict — the co-ordination of propaganda between the Islamic Republic and the Syrian regime. Iranian outlets, including the Revolutionary Guards’ Fars News, have established bureaus in Damascus, and the often-matching language between Syrian and Iranian State outlets testifies to a linked approach.

In part, the recent escalation points to the Iranian concern over foreign intervention and events which, putting the Assad regime in a bad light, might spur that involvement.

Addressing the possible chemical weapons attack, Press TV declared yesterday — using the putative “analyst” who declared that Takfiris and Zionists eat people — that the assault was a “false flag” staged by the US, Israel, and insurgents:

The Syrian Army vehemently rejected the allegation that it used chemical weapons against Takfiri militants, saying the accusation was fabricated to distract the visiting team of the UN chemical weapons experts and to cover up militants’ losses.

The “Takfiri militants” also pop up today in “China Urges ‘Objective’ Probe in Syria” of the chemical weapons attack.

But still there remains the question of whether the propaganda reflects the state of power within the Iranian regime. Even during the Ahmadinejad Government, the Supreme Leader’s office was harder in its rhetoric than the President — while Ahmadinejad would at least refer to “political reforms” by the Assad Government, Ayatollah Khamenei’s advisors preferred to focus on the transgressions of foreign powers and the insurgents.

So is this happening with a new President? And, if so does it means that the Rouhani “engagement” will be undone by the unflinching Iranian line behind President Assad?