Syria, July 24: Insurgent Victories Near Aleppo — Is City Next? 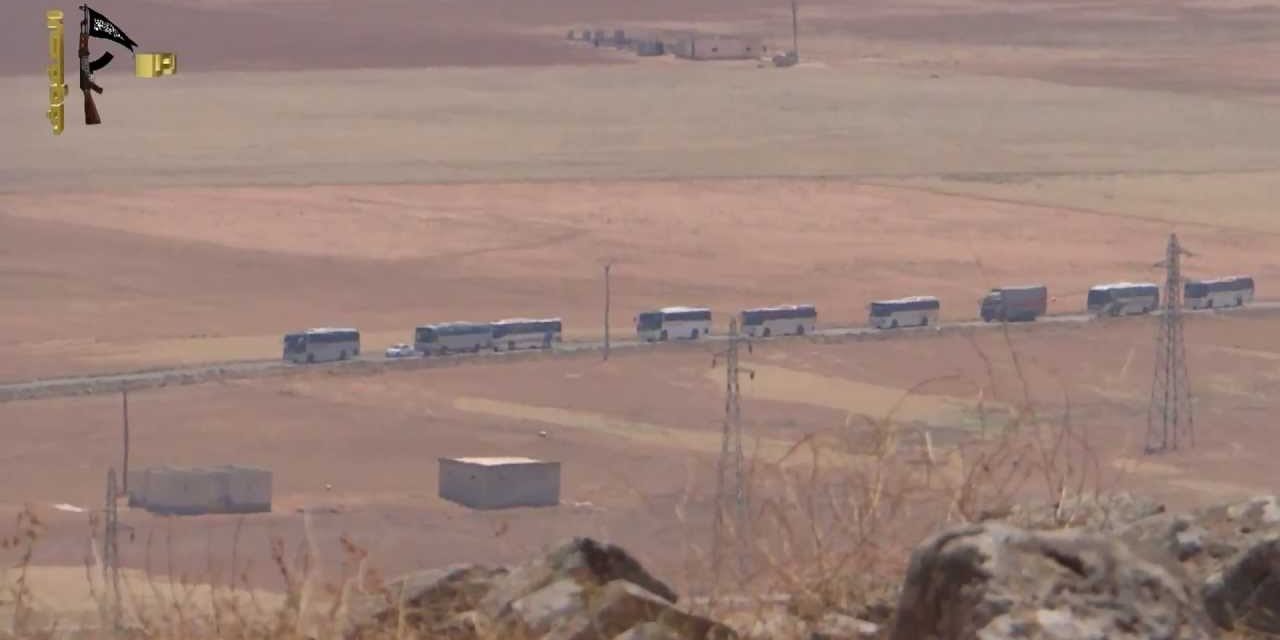 PHOTO: A Syrian military convoy under attack on Tuesday

The insurgent capture of Khan al-Assal, near Aleppo, on Monday is only one of a series of successes against regime forces near Syria’s largest city.

On Tuesday, an operation including several brigades, including Ahrar al-Shah, halted a large military supply convoy [Editor’s Note: This was later established to be a group of civilian buses — the gunfire reportedly killed four people and wounded others, including 17 Armenians]:

insurgents claimed the takeover of the Syrian army’s artillery base in al-Hajjarah:

All of this is significant in reinforcing the opposition’s control of most of Aleppo Province, but it raises a bigger question.

Tightening their control of the countryside and cutting off supplies, the insurgents are bolstering their siege of regime-held areas of Aleppo. Can they use that pressure to support an offensive against those neighborhoods, shifting a year-long stalemate within the city?

This video, posted on Wednesday, purports to show “shabiha” — pro-Assad militia — captured by the Free Syrian Army after insurgents took control of the village of Khan Al Asal. There appear to be six prisoners, who are being held on a bus. One of the prisoners appears to be very young, possibly under twenty. They are injured and most are weeping, as their captives mock them with calls of “shabiha”.

The Armenian News Agency has challenged previous reports by insurgents that they hit a military bus convoy trying to bring supplies to regime-held areas of Aleppo (see video in introduction).

The ANA says the convoy was made up of civilian buses. It reports that 17 Armenian passengers, en route to Beirut, were injured, two critically. There are unconfirmed claims that the driver and four passengers were killed.

Prominent activists on Twitter are also changing to the story of an attack on a civilian convoy, while offering context and attempted explanation:

One activist, “NuffSilence”, says that insurgents recently re-took the Khanaser-to-Hama road after regime forces opened it, and thus the supply line to Aleppo, six weeks ago.

He argues that, despite an insurgent offensive which also attacked military positions in the near-by village of Hijarah, Syrian authorities continued to allow civilian traffic to travel on the route:

9- The advantage of the overrun post is that it's on higher level & overlooks Khanaser road. The regime was aware that the road isn't secure

10- isn't secure anymore & it's not in control of it anymore. YET, they let civilian buses drive from Aleppo down that road & get ambushed.

11- regime had been boasting it secured a land road to Aleppo, & when they lost portion of it they didn't bother to block it to civilians…

The Ahrar al-Sham Brigade, one of the leading insurgent factions, has announced an offensive against the Kurdish militia YPG in Ras al-Ain near the Turkish border.

The YPG brought the Kurdistan conflict into the headlines last week when it moved into Ras al-Ain and briefly detained a local Islamist commander.

Ahrar al-Sham said in its statement that it is acting against “pro-Assad” Kurdish forces, and not against the Kurdish people.

Turkish Deputy Prime Minister Bulent Arinc has set out a cautious line in the Erdogan Government’s latest statement on the fighting in Syrian Kurdistan, ruling out Ankara’s military action:

We have already announced that we will not allow any fait accompli in Syria. But we are of the opinion that any intervention would make the situation in Syria more negative.

Witnesses film near-by explosions, possibly from barrel bombs, in Saraqeb in Idlib Province — the area has been under regime bombardment for days:

As of July 22, the United Nations recorded more than 633,000 Syrian refugees in Lebanon.

Lebanese ministers said they had no intention of closing the border to genuine refugees, but added that they would only recognise those fleeing parts of Syria wracked by violence.

“There is an influx that is not motivated by humanitarian needs,” Minister of Economy Nicolas Nahas said.”The security forces are therefore going to start checking whether those arriving at the border come from a war-ravaged area before regarding them as refugees. Those who do not will be granted entry as ordinary visitors.”

Minister of Social Affairs Wael Abu Fawr said that, from next week, special teams would shut down unlicensed Syrian-run businesses that have grown, particularly in the eastern Bekaa valley region near the border.

Al Halqi also said that the government continued to open new shops that sell various products in bulk and at low prices, although he did not specify where these retail outlets had been opened. Al Halqi said the move “had cut prices by 15%”, and that the government plans to act over the next few days “to reduce prices by 25%” — presumably of basic foodstuffs and fuel.

Earlier on Wednesday, the Syrian National Coalition called on the international community and UNESCO to act to preserve Syria’s cultural, religious and historic sites. This video, posted on Tuesday by activists in Deir Ez Zor, shows the destruction of that city’s Uthman Mosque.

The video, a citizen journalist report, is in the form of an interview with a Free Syrian Army fighter from Deir Ez Zor, who laments the destruction of the mosque — a “House of Allah” — which he says hurts all Muslims.

Just as the world has no accurate idea of the real death toll of the Syrian conflict, so the extent of destruction of Syria’s cultural and religious heritage remains unknown.

Over the past week, EA has reported footage from Homs showing the destruction of one of the city’s most famous landmarks — the Khalid Bin Walid Tomb. The tomb is an important site not just for Homs or Syria, but for the Islamic world.

On Wednesday, the Syrian National Coalition described the shelling of the tomb as “a systematic strategy to change the demography of Homs”.

The SNC called on the international community and UNESCO to act to save Syria’s remaining humanitarian, religious, and cultural heritage in Syria.

The Assad regime, in turn, has blamed insurgents for destroying Syria’s cultural heritage.

Opposition Activists Released in Exchange for Food in Aleppo

Eighty opposition members have been released from Aleppo’s Central Prison in a “Food for Freedom” deal, brokered by the Syrian Red Crescent.

Under the agreement, the Ahrar al-Sham Brigade — a leading faction in the siege of regime-held areas of Aleppo — will ease the blockade to enable Syrian forces to transport food and supplies.

Turkey Detains and Deports Suspects in Claimed Killing of Bishops

The three men were captured during a police control in Konya Province and sent to their home countries following official procedures, according to authorities.

The Assad regime is trying to get a propaganda win out of the current fighting between Kurdish militia and insurgents in northern Syria, but it may have gone over the top with this statement, attributing it to the Russian Foreign Ministry:

The Ministry referred to the increasing tension in Ras al-Ein and Tal Abyad areas on the Syrian-Turkish borders, pointing out that terrorists kidnapped 500 civilians and beheaded many of them, and that the terrorists are still holding around 200 civilian hostages and using them as human shields.

We have not seen such a statement from Moscow. The “kidnapped” civilians in Tal Abyad, taken in retaliation for the seizure of an Islamist commander by Kurdish militia, were later released in an exchange, and there has been no indication of “beheadings” or “human shields”.

State media confirmed on Tuesday that the Cabinet, under serious pressure on the Syrian currency, has approved a bill criminalizing dealing in foreign currencies.

Clashes continue across the north between the Kurdish militia YPG and insurgent factions — a clip from Monday of a YPG convoy on the move:

The Local Coordination Committees claim 121 people were killed on Tuesday, including 32 in Daraa Province, 29 in Idlib Province, 24 in Damascus and its suburbs, 13 in Homs Province, and 11 in Aleppo Province.

The Violations Documentation Center reports that 67,179 people have been slain since the start of the conflict in March 2011, an increase of 121 since Tuesday. Of these, 51,098 were civilians, a rise of 74 from yesterday.