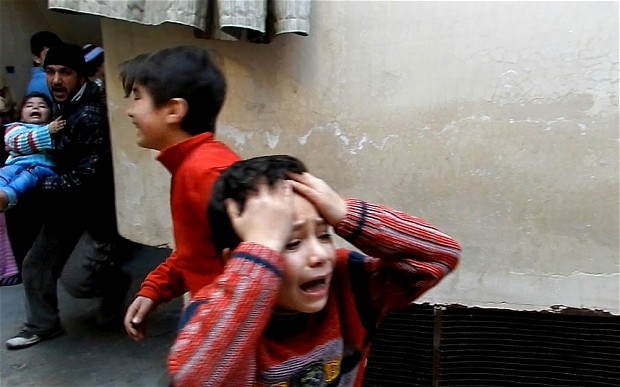 A UN official has warned both sides in the Syrian conflict that they could be prosecuted for war crimes against children.

Leila Zerrougui, special representative of the Secretary-General for Children and Armed Conflict, said on Monday:

I met parents whose children were killed in bombings, children who saw siblings die in front of them and teenagers who had fought with armed opposition groups.

Zerrougui was speaking after a recent visit to Syria and to neighbouring countries hosting 1.8 million refugees.

“One day Syria will come to peace, and those committing the atrocities will have to face, I hope, justice,” she said.

About 7,000 children under the age of 15 have been killed since the conflict began in March 2011. Half of the refugees are children, and within the country more than three million children need aid.

Footage posted on Tuesday purports to show the moderate Islamist Al Farouq Brigades en route from Homs to Al Hasakah in the north to support the fight against Kurdish groups. Activists from a group calling itself the Tall Abyad Network News claimed that the video shows the Al Farouq Brigade attempting to cross the Qarah Qawzaq bridge near Manbij in Aleppo Province (see map).

According to security consultant Graham Cluley, Viber’s Support and Knowledgebase website was “commandeered by the hacking group, and private data about users published on the web”.

SEA claimed that it had hacked Viber because it is an “Israeli-based app” that is “spying and tracking” its users.

Following claims on Monday by insurgents and opposition activists that insurgents had captured the strategic village of Khan Al Asal near Aleppo, State media on Tuesday claimed that regime forces had destroyed “terrorist dens” in the village and its surrounding countryside.

In its reports of gains, State media has begun to refer to insurgents not as “terrorists” but mostly as “terrorists affiliated to [Islamist group] Jabhat al-Nusra”. This appears to be part of a regime media strategy to put out the line to the West that the Assad Government is not fighting a domestic uprising but an international insurgency comprised of groups that are hostile to Western interests.

In Aleppo city, units of the armed forces achieved a great progress in al-Rashidin neighborhood seizing control over a number of building blocks after killing the terrorists who had been stationed in them.

Meanwhile, army units destroyed dens for Jabhat al-Nusra terrorists in the neighborhoods of Bustan al-Qasr and al-Sheikh Khudr, killing and injuring many of the terrorists.


Activists posted several videos on Tuesday showing footage of some of the fighting in al-Rashidin. These videos claim to show the Nur Addin Al Zanki Brigade in clashes on Tuesday:

Claimed footage from Tuesday of civilians using the Garage Al Hajz checkpoint in Aleppo’s Bustan Al Qasr neighborhood. Every day, around 10,000 people use the checkpoint — the only crossing between the regime- and insurgent-controlled areas of Aleppo. Most of the people who use the crossing do so to shop for basic items. On Monday, the crossing was closed, activists said, because of sniper fire, likely from regime forces.

Syrian National Coalition: Hezbollah Leaders Should Be Put On Trial

The Syrian National Coalition on Tuesday said that leaders of the movement should be put on trial for the “terrorist crimes they committed on Syrian soil”.

The SNC said that a decision by the EU to blacklist Hezbollah’s military wing was “a step in the right direction and highlights the need for the European Union to take measures to stop (Hezbollah’s) militia from intervening in Syria” and that the Lebanese group’s intervention went “against the aspirations for freedom and dignity of the Syrian people”.

“The free world must take preventive measures against Hezbollah’s leaders, members and supporters, who participated in the spilling of Syrian blood,” said the SNC.

The men said that they carried out several car bombings in the Damascus countryside, and had smuggled weapons and ammunition from Lebanon.

Syrian State TV has broadcast similar “confessions” on a number of occasions. The “confessions” have been used as a way for the Assad regime to cast the insurgency as a “terrorist-led” operation, run by Islamist extremists, and which goes against the principles of the Syrian state.

In Monday evening’s “confession”, for example, the six men said that they considered Jihad in Syria, and establishing an Islamic Caliphate in that country, to be “more important than Jihad against Israel”.

Video: Smoke from Regime Shelling of Damascus Suburb of Barzeh

Follow-Up: US, UK, and “Where is the Aid from the Assistance Coordination Unit?”

Last month we wrote on the public-relations offensive behind the Assistance Coordination Unit, linked to the opposition Syrian National Coalition.

We noted the gap between the ACU’s claims, put out by the US Government, and the “reality” on the ground inside Syria:

There is no concrete evidence of where US humanitarian aid is going and how it is reaching Syrians. How does [the State Department’s Mark] Ward know that US aid is feeding 200,000 people in Aleppo? Which insurgent groups on the ground are working with the US and the ACU to deliver supplies?

We are left with no aid of how Ward’s assertions, and the work of the ACU, might intersect with the evidence that we do have of insurgent groups and local charitable organizations establihing their own local networks for provision of humanitarian aid.

No matter. The ACU continues to roll up political and PR successes. On Twitter this morning, British Foreign Office Minister Alistair Burt cheer-leads and reveals that London is now also putting money into the effort:

A Syrian activist channel on YouTube has posted a series of videos from this week’s fight for the strategically-important village of Khan al-Assal near Aleppo.

Insurgents moved into the village on Monday after killing the commander of the Syrian forces this weekend.

The debate within the Obama Administration over the arming of insurgents continued — and went public — on Monday.

The head of the Joint Chiefs of Staff, General Martin Dempsey, used an appearance before a Congressional committee to put out a series of objections to a large-scale initiative, saying it will cost billons dollars and is “no less than an act of war”.

Dempsey, implicitly invoked the ill-fated Iraq War, claimed the lesson of the last decade was that “it is not enough to simply alter the balance of military power without careful consideration of what is necessary in order to preserve a functioning state”.

However, an unnamed Administration official hit back by saying — as quoted by CNN — that President Obama “is in a position to move forward with a plan to arm Syrian rebels.. after concerns raised by Congress were resolved”.

Since the Administration announced in June that it would arm the insurgents, the State Department has been pressing for a significant effort. In contrast, the military has been cautious and downplayed ideas for the supply of heavy armaments, including anti-tank and anti-aircraft weapons, and a no-fly zone.

Eating Leaves in a Damascus Suburb

Phil Sands writes for The National about life in Moadimiya, a Damascus suburb in which about 50,000 people lived before the start of the conflict in March 2011:

It was spring when the remaining people in Moadamiya…started eating the leaves of trees because there was little else in the way of fruits or vegetables to put in their stomachs.

Four months later a serious shortage of food, fuel and medical supplies in the rebel-held neighbourhood has become even more acute.

Moadamiya is just six kilometres south-west of Damascus, where food is still freely available, if more expensive than ever. But an increasingly strict blockade put in place by regime military and militia units has left Moadamiya a world away from the malls and markets in Maliki, Kafa Susa and Abu Rumaneh still used by Syria’s wealthy elites.

Grape vine leaves, stuffed with rice and meat and soaked in oil, are a traditional, much-loved meal in Syria. In Moadamiya, the vine leaves are being eaten without any filling, while the leaves from other trees, not usually considered food, are also being boiled and eaten.

“It’s a terrible situation, people are eating whatever they can grow, they eat any leaves off the trees,” said Abu Jafa, a leading opposition figure from Moadamiya, and one of a few hundred people still living in the district. “It’s getting worse, we are under an intensive attack from all sides and the regime isn’t letting anything in or out.”

Sands reports that the United Nations World Food Programme has tried eight times since October to enter the area but, according to an official, were “either turned back, did not get approval, or came under fire”.

Journalists and aid agencies have been unable to enter Moadamiya for the past 10 months because of restrictions imposed by the Syrian regime.

The Local Coordination Committees claim that 95 people were killed on Monday, including 22 in Damascus and its suburbs, 17 in Aleppo Province, 15 in Homs Province, and 13 in Daraa Province.

The Violations Documentation Center reports that 67,058 people have been slain since the start of the conflict in March 2011, an increase of 170 since Monday. Of these, 51,024 were civilians, a rise of 75 from yesterday.