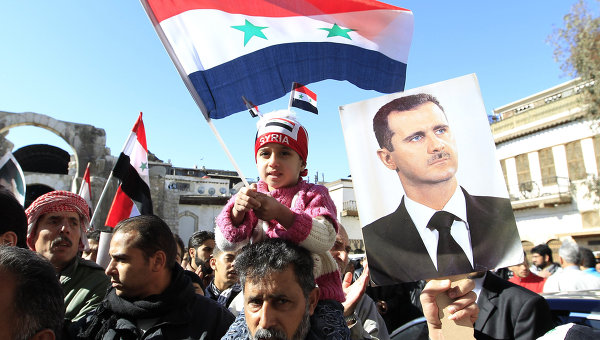 On Saturday, EA put together video evidence to tell a story of how insurgents abused and killed regime forces after their capture of Khan al-Assal near Aleppo on Monday,

Inevitably, that story is not just “news” but also valuable propaganda.

By Friday, the Syrian regime was carrying out a PR offensive against Western military support for the insurgency — Minister of Information Omran al-Zoubi said that it was “well-known that the terrorists are directed, trained, armed and funded by the US, France, Britain, Saudi Arabia and Turkey who are legally responsible for the crimes of their terrorist pawns”.

Al-Zoubi reiterated the regime’s position that it is fighting not just an insurgency but an ideological battle to save Syria’s national and pan-Arab project, begun by President Assad’s father, Hafez al-Assad. He accused Saudi Arabia of “carrying out this destructive role for decades as it seeks to destroy the pan-Arab project and cause fragmentation and instability”.

The line is far from new: a statement issued by the regime last October, on “Liberation War Day” marking Syria’s fight against Israel during the 1973 Yom Kippur War, said the current conflict was a “battle of saving Syria which has always been the hallmark in the region’s history and geography”.

What is significant now is the escalation, using the accusation of a massacre, of the campaign after foreign support of the insurgency. Al-Zoubi said, “If they are rallying and arming themselves and talking about special weapons, we’re not sitting idly; we’re preparing and we’ll keep preparing.”

That campaign is cloaked in Syrian nationalism as a beacon for pan-Arabism, linking “deviant” Arabs and the Zionists as enemies:

[Al-Zoubi] said that the takfiri Wahabi mentality of the terrorist groups in Syria is unilateral, in that it shares much with Zionist mentality, which is why Saudi Arabia, Turkey and Israel are united in hating the Syrian people as it is the natural enemy of unilateral thinking due to its history, culture, civilization and diversity.

Israel is the primary beneficiary from weakening the Syrian Army and all Arab armies, asserting that the Saudi regime is involved in supporting terrorists who fight Arab armies, and that there are Saudi Emirs from the royal families who direct the arming and funding of terrorists from Amman and Turkey.


And so the events in Khan al-Assal take their place in a wider campaign by the Syrian regime to establish itself as the true defender of pan-Arabism.

That defense is against not only the West but Turkey’s ruling Justice and Development Party, accused of being part of the “extremist Muslim Brotherhood project in the region”.

And the strategy is not only pointed at Saudi Arabia but also Cairo.

Earlier this month, President Assad expressed support for the military coup removing Egyptian President Mohamed Morsi, calling it the “end of political Islam”. In Friday’s interview, Al-Zoubi said it was Turkey’s links to the Muslim Brotherhood — the main force behind the Morsi Government — which provided the reason Ankara was “conspiring against Syria” — “[It is] seeking to assume control, not build states, and…the same plans used against Syria are being prepared for Egypt.”