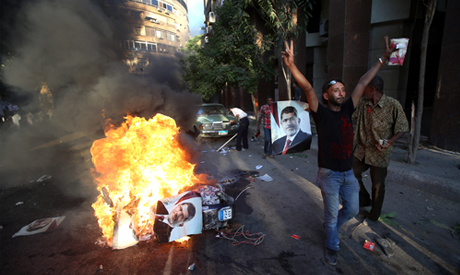 At least eight people were killed and 40 injured early Tuesday in fighting with supporters of deposed President Mohamed Morsi in Cairo, in Qaliubiya Province north of Cairo, and in Damietta, north of the Nile Delta.

Police sources said at least six people were killed when hundreds of Morsi supporters were confronted by local residents, street vendors, and others as they approached Cairo’s Tahrir Square en route to a rally at the US Embassy a few blocks away. Gunshots were fired and stones were thrown.

Police fired tear gas to halt the clashes, as several cars were destroyed or set on fire.

An army officer said protesters at an anti-Morsi sit-in at Tahrir Square charged the pro-Morsi march, believing it was intending to storm the square.

The Muslim Brotherhood, which backed the Morsi Government, said five people were killed.

“Leaders of the military coup continue to terrorize the peaceful protesters in Egypt,” the Brotherhood’s Freedom and Justice Party said.

Officials said two people were killed in Qaliubiya Province. Three others were injured –– one by birdshot, two when they hit by a train while fleeing the gunfire.

A statement allegedly issued by the Islamic State of Iraq and As-Sham (ISIS) on Tuesday claims responsibility for Sunday night’s assaults on the Abu Ghraib and Taji prisons.

Soldiers, police, and attack helicopters were dispatched to end the fighting and rioting by prisoner after attackers raided the two jails with rocket-propelled grenades and mortars.

In the statement, whose authenticity has not been verified, ISIS claimed that “hundreds” of prisoners were freed in the attacks, among them over 500 ISI fighters. ISIS said that 12 car bombs were used in both operations, which it named as the “Battle of Conquering the Tyrants”.

Curiously, ISIS claimed in the statement that its forces had targeted “Safavid army forces” during the attack, and that those forces had been involved in guarding the prisons. The term “Safavid” — whose original meaning refers to the Safavid Dynasty, who established the Twelver School of Shia Islam — is commonly used by Sunni militants to refer to Iran and the Iranians, and those connected with them, particularly Hezbollah.

ISIS said that the attacks came in retaliation for attacks against Shia Muslims in Iraq in past months.

Egypt: At Least Six Attacks Against Christians Since Military Coup

Witnesses said in several of the attacks — in Luxor, Marsa Matrouh, Minya, North Sinai, Port Said, and Qena — security forces did not act to prevent or stop the violence.

According to HRW, the deadliest incident happened on July 5, 2013 when local residents beat four Christians to death inside their home, after a Muslim was found dead in Naga Hassan, a village 10 kilometers west of Luxor. HRW cited witnesses as alleging that police failed to stop a 17-hour rampage against Christians, in which three more people were wounded and at least 24 Christian-owned properties were destroyed.

The National Salvation Front (NSF) slammed what it said were “continuing attacks by the Muslim Brotherhood against peaceful protestors in Cairo, Alexandria, and other cities.”

The NSF said it supported “peaceful expression” but warned that the “actions by Muslim Brotherhood supporters since June 30 … have no connection with rights protected under law. They are considered crimes punishable by law.”