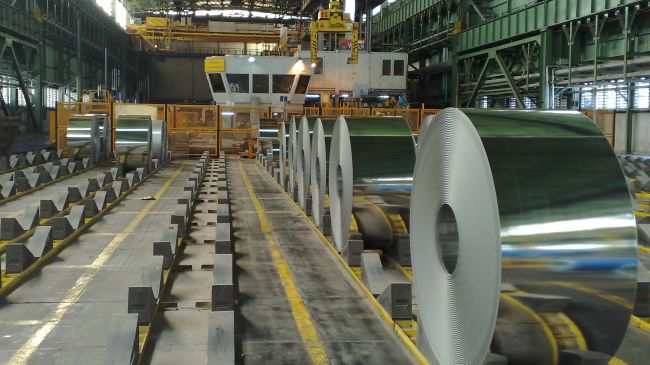 State outlets Press TV and Fars News headline, as proof of Iran’s economic good health, a dramatic 2% increase in steel production in the past year.

Iranian officials have declared that the Islamic Republic will produce more than 24 million tons of steel between March 2013 and March 2014 — a rise of more than 60% on 2012/13.

The police placed the items and evidence they allegedly confiscated during the sweep for the edification of the public and media. These include not only run-of-the-mill criminal paraphernalia like guns, knives, swords and axes and drug apparatus but also other criminal items like alcohol, jewelry, and prohibited CDs of Western music.

To drive the message home, Tehran’s security forces also made sure to publicly shame those arrested during the sweep by exposing their tattoos, which are deemed by authorities as un-Islamic.

Education Minister: Every Iranian Child Should Have Computer Access

Iran’s Education Minister said Tuesday that each child in Iran should have access to a computer and that “this intelligent process has begun in 36,000 schools around Iran.”

Speaking at an event celebrating Tehran’s top schools, Hamid-Reza Haji Babaee added: “New technologies increase classroom enthusiasm among students. We are talking about a fundamental change that all schools should take advantage of and use.”

The Education Minister’s remarks also follow comments by President-elect Hassan Rouhani, who called for less internet filtering and increased interaction between Iranians and the world.

In an interview with Khabar Online, Manouchehr Manteqi discussed the status of Iran’s aviation industry and new aerospace projects.

Khabar quoted Mantegi as saying that: “Iran’s national aviation industry in conjunction with seven international companies is producing a short-to-medium range 150-seater passenger ‘plane comparable with a Boeing 737 or an Airbus 320.”

International sanctions prohibit the sale of civilian aircraft and aircraft parts to Iran, a move that Tehran has said endangers lives because the Islamic Republic is unable to upgrade its aging civilian fleet.

Despite this, Mantegi — while admitting that international sanctions have affected Iran’s aviation industry — claimed that: “Iran has dealt with sanctions from early on, and has ways to deal with them.”

Also on Tuesday, ISNA posted a series of photos of an airplane manufacturing plant in Isfahan that show an aircraft that appears to resemble the 52-seater passenger plane that Manteqi mentioned.

“Youth Have No Real Goals for Their Future”

Majid Abhari, a pathology and behavioral science expert, has told ILNA that “67% of youth inside Iran have no real goals for their future”.

Abhari’s research with the Institute of Behavioral Sciences was carried out with more than 8000 men and women, between the ages of 17 and 26, from across Iran.

According to Abhari, the main factors for lack of ambition are “lifestyle changes induced by friends, satellite TV, and the Internet”. He claimed that the “best way for youths to reform this behavior would be to return to their Iranian and Islamic lifestyle”.

With less than two weeks to go before current President Mahmoud Ahmadinejad is replaced by President-elect Hassan Rouhani, First Vice President Mohammad-Reza Rahimi declared on Tuesday that Iranians will not forget their outgoing leader.

“The work of the Ninth and Tenth Governments will stand the test of time, and Dr. Ahmadinejad’s name will remain everlasting in Iran as his extensive self-service to the country will never be forgotten by the nation,” Rahimi said during a visit to the South Khorasan province to oversee local projects in the area.

Judiciary chief Sadeq Amoli Larijani claimed on Tuesday that Islam is “the true harbinger of human rights”, and accused the West of imposing its own principles on the world.

In a speech to the judiciary, Sadeq added that: “Ignoring the situation in Bahrain and Egypt are prime examples of inconsistent behavior and respect for freedom that the West has for human rights.”

Leading MP: Inflation for Food at 61%

Kazem Jalali, a leading member of Parliament’s Research Commission, has said that “point-to-point” annual inflation for food items is now 61%.

MP Motahari: If Straw Apologizes To Iran, So Should Occupiers Of British Embassy In Tehran

Addressing comments from a number of Iranian MPs regarding whether former British Foreign Minister Jack Straw should apologize before coming to Iran, outspoken MP Ali Motahari said Tuesday that: “If Jack Straw has to apologize to the Iranian nation, the occupiers of the British embassy in Tehran should also apologize.”

Motahari, who is also a member of the Parliament’s Cultural Commission, also suggested a potential future role for former President Mohammed Khatami in the Rouhani administration.

“Currently he (Straw) has no position in the British government. If these prominent figures request to attend the inauguration ceremony of the new President, why should we not allow them? Sometimes through such means governments can improve their relationship. Iran could also send pleasing figures such as Khatami to some foreign countries in order to resolve some of the country’s foreign policy issues — these methods are commonly used in today’s world. Former and retired officials can sometimes thaw the frozen political relations between countries.,” Motahari explained.

Foreign Ministry Spokesman: Everyone Except America And Israel Invited To Rouhani’s Inauguration

In his weekly press conference, Foreign Ministry spokesman Abbas Araqchi threw cold water on
the widely reported possibility of a U.S. official being invited to the inauguration of President-elect Hassan Rouhani.

“Our invitation includes all the countries (of the world), of course with the exception of the United States as well as the Zionist regime that we do not formally recognize as a country,” Araqchi said.

While stressing that America and Israel were not invited to the ceremony, Araqchi noted however that: “this is the first time since the victory of the Islamic Revolution that it has been decided to invite foreign officials to attend the inauguration ceremony.”

A Rude Welcome for Former British Minister at Rouhani Inauguration?

Some Iranian outlets are highlighting the possibility that former British Foreign Minister Jack Straw will attend the inauguration of President Hassan Rouhani on 4 August, but one senior figure is not so welcoming.

Insisting that Government co-ordinate the guest list with Parliament, MP Ruhollah Hosseinian said Straw would be received with tomatoes at the inauguration ceremony.