Syria Today: The Division Within Obama Administration Over Intervention 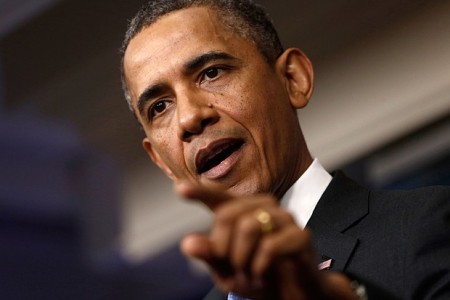 A detailed account by Jeffrey Goldberg for Bloomberg confirms our analysis of the division within the Obama Administration over the extent of US intervention in Syria.

While the Administration for the first time has agreed to publicly supply weapons to the insurgency, heated debates were waged last week over 1) the extent of that weaponry; 2) no-fly zones; and 3) proposals to hit the Assad regime’s airbases.

Goldberg focuses on the third, with sources talking about a meeting of the Principals Committee, the second-highest body in the Administration for foreign policy decisions:

Secretary of State John Kerry began arguing, vociferously, for immediate U.S. airstrikes against airfields under the control of Bashar al-Assad’s Syrian regime — specifically, those fields it has used to launch chemical weapons raids against rebel forces.

It was at this point that the current chairman of the Joint Chiefs of Staff, the usually mild-mannered Army General Martin Dempsey, spoke up, loudly. According to several sources, Dempsey threw a series of brushback pitches at Kerry, demanding to know just exactly what the post-strike plan would be and pointing out that the State Department didn’t fully grasp the complexity of such an operation.

Dempsey informed Kerry that the Air Force could not simply drop a few bombs, or fire a few missiles, at targets inside Syria: To be safe, the U.S. would have to neutralize Syria’s integrated air-defense system, an operation that would require 700 or more sorties. At a time when the U.S. military is exhausted, and when sequestration is ripping into the Pentagon budget, Dempsey is said to have argued that a demand by the State Department for precipitous military action in a murky civil war wasn’t welcome.

Goldberg’s article has weaknesses — for example, it does not recognise that alleged Syrian regime use of “chemical weapons” is a pretext, rather than the motive for US escalation, and the author mixes in his wayward speculation about the thinking of the military and the President — but it is valuable for bringing out the extent of the division:

Members of the White House national security team, who tend to be more hawkish than Obama or Dempsey (though not as quite as militant as Kerry), had been arguing that, in the words of Tony Blinken, the deputy national security adviser, that “superpowers don’t bluff.” Once Obama had drawn a red line around chemical weapons, the White House had no choice but to take some sort of action.

The outcome — or rather lack of outcome — over no-fly zones complements Goldberg’s story on airstrikes. An account earlier this week in The Wall Street Journal, fed by Administration sources, established that “senior State Department officials” had pressed for 25-mile zones inside southern Syria, enforced by US aircraft from Jordanian bases.

However, the military expressed strong reservations, and it appears President Obama tipped their way. By the end of last week, both de facto White House spokesman Benjamin Rhodes and incoming National Security Advisor Susan Rice were pushing back against the idea, and Obama ruled it out in a brief comment in a weekend interview with the US Public Broadcasting Service.


Latest Updates, From Top to Bottom

The Syrian National Coalition, based in Istanbul, issued a statement on Wednesday accusing Syrian President Bashar al-Assad of attacks on southern Damascus and of preventing food and medicines from reaching the 120,000 civilians stranded in the area. The Coalition said Assad’s forces were creating a humanitarian crisis by deliberately targeting physicians and activists from humanitarian groups, and called on the international community to intervene.

Assad’s forces, with the help of Hezbollah and Abu Fadl Al Abbas brigade fighters, are attempting to advance using air support by launching rockets and heavily shelling areas. At their disposal are also tens of tanks, various armored vehicles and heavy weaponry.

Civilians in this area live in grim fear and anxiety, with no electricity and no way to escape from the anticipated large scale massacre that often follows these types of regime attacks.

UNHCR Special Envoy Angelina Jolie talked to Syrian refugees from Homs, Daraa and Qusayr on Wednesday, during a visit to Syria’s border with Jordan ahead of World Refugee Day on Thursday. 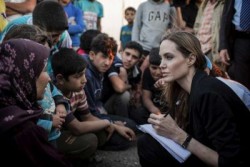 Among the refugees to whom Jolie spoke were Mohammed Al-Kassem, his wife Walida and their young daughter Faten, who had fled Qusayr, the Syrian border town recently taken over by regime forces and Hezbollah fighters.

“In the battles and bombing, most of my friends died,” Al-Kassem said. “There is nothing left, all was destroyed, no buildings, no medicines. Ninety five men died because their wounds became infected and there was nothing to treat them with. I was the only one of my family to escape. Those who could not flee can only wait for death.”

Over 1.6 million Syrians have been forced to flee since the conflict began 27 months ago.

The videos below purport to show the National Eye Hospital in Aleppo after an airstrike by Syrian regime forces hit one of its buildings.

In this video, smoke is seen rising from one of the buildings:

This video shows footage of burning in the Qadi Askar neighborhood, which is just north of the hospital:

Map showing location of Qadi Askar and the hospital:

This video, uploaded by activists on Tuesday, shows Syrians in Raqqa protesting against Jabhat al-Nusra. A woman yells, “We’re all Muslims. We will not accept an oppressive Islam!”

Reuters claims that an insurgent unit has claimed responsibility for the killing of four “followers of Hezbollah” this week.

Reuters does not link to the claimed footage, but is presumably referring to these two videos.

The first shows three heavily armed insurgents — named only as the “detachment of Mujahideen of Syria”, implying that they are from a larger insurgent group, making a statement about killing the four men as they were trying to enter Syria.

A second video posted by the Unit showed the four men’s identification cards as well as two assault rifles and two pistols that the insurgents say they found on the dead.

Syrian State media reported an explosion in a military engineering complex in Lataqia on Wednesday morning. The report said the explosion, in a weapons and ammunition warehouse between the villages of al-Bassa and Hanadi was caused by a “technical error” and that six people were injured.

This video — quality very low — appears to show a large plume of smoke rising from the port.

Pro-regime outlets said the explosion was caused by poor storage and high temperatures.

UK-based opposition activist group the Syrian Observatory for Human Rights had a different story, saying on its Facebook that “at least 13” military personnel were wounded, some critically, in the explosion and that there were no reports about the source of the explosion.

The Iraqi Government has ordered the movement of almost 8,000 troops toward the Iraqi-Syrian and Iraqi-Jordanian borders.

Prime Minister Nuri al-Maliki, who is also commander-in-chief of the Iraqi armed forces, issued the order on Sunday night.

The Government is putting out the line that the action is related to the Syrian conflict, “to secure Iraqi areas adjacent to the border and to prevent fighters from sneaking into [Iraq]”.

A consultant to al-Maliki linked the Syrian developments to a spike in violence inside Iraq and “information on al-Qaeda in Iraq’s new plan to force the troops to concentrate in the cities, in which the bombings and acts of violence take place”: “The bombings in Iraq increase every time Syrian fighters who oppose the Syrian regime sustain painful military strikes, as just happened in the Qusair battle.”

However, the deployment also comes a few days before local elections in the cities of Mosul and Anbar.

The Local Coordination Committees claim 78 people were killed on Tuesday, including 27 in Damascus and its suburbs, 16 in Idilb Province, and 15 in Aleppo Province.

The Violations Documentations Center records 64,006 deaths since the start of the conflict in March 2011, an increase of 114 from Tuesday. Of the dead, 49,267 are civilians, a rise of 85 from yesterday.