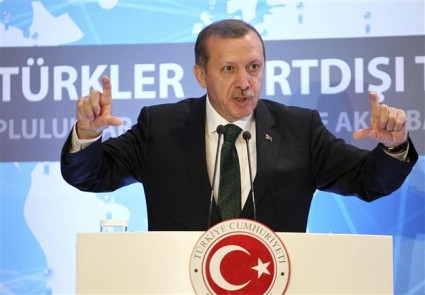 Photo: Turkish Prime Minister Erdoğan “Our Police Will Not Overlook Any Lawlessness” (AP)

In his latest statement, Prime Minister Recep Tayyip Erdoğan has declared that a strengthened police force will confront nationwide protests, now in their third week, against his Government. Sweeping aside criticism of the crackdown on demonstrations, Erdoğan told MPs of his ruling Justice and Development Party:

Within the authority the law provides, from now on, our police will not overlook any lawlessness, will continue to fulfill its duty. We will further strengthen our police. We will strengthen further in every way. So that we will increase the intervention power against these events.

Erdoğan knocked back objections, including from the European Union, to the police use of tear gas against demonstrators, including in the clearance of the focal point of Istanbul’s Taksim Square:

It is their most inherent right….When you do not obey, the police use this authority….What did they do? Did they shoot bullets? Use bullets? No.

Declaring that there would be an enquiry into the protests, fostered by the Government’s plans to clear the green space of Istanbul’s Gezi Park, the Prime Minister said they were a massive conspiracy with some “internal traitors and external collaborators”:

It was prepared very professionally. Social media was prepared for this, made equipped. The strongest advertising companies of our country, certain capital groups, the interest rate lobby, organizations on the inside and outside, hubs, they were ready, equipped for this.

Deputy Prime Minister Bulent Arinc said that the protest by hundreds of people standing motionless for hours in Istanbul’s Taksim Square was peaceful and “pleasing to the eye”, although he urged protesters not to obstruct traffic and not to endanger their health.

The protest began on Monday night as a solitary demonstration by performance artist Erdem Gündüz, who stood silently in front of the flag of modern Turkey’s founder Mustafa Kemal Atatürk, hung on the Atatürk Culture Center — scheduled for destruction in Government plans for the clearance of nearby Gezi Park’s green space.

Gündüz was joined by others before they were briefly detained. However, on Tuesday, about 300 people returned to the spot to resume the silent protest.

Arinc’s praise is in contrast to his warning against mass gatherings in Taksim Square, cleared by police last week, with the signal that the Army could be summoned to disperse demonstrators.

Tunisia: Sentences for Attacks on Shrine

A Tunisian court has sentenced six men to five years each in prison for attacking visitors to a famous Sufi Muslim shrine in Tunis, setting the shrine on fire.

The attack was carried out last October by Salafi Muslims who consider the Sufi practice of visiting and praying at tombs to be heretical.

Sufi leaders in Tunisia say that dozens of sites held dear by their sect have been vandalised in the last year.

Four of the six defendants are in custody; the other two were tried in absentia.

Lebanon: Photos of Clashes in Sidon

Lebanon’s Daily Star posts photographs of the Lebanese Army’s deployment on Tuesday in Abra, an eastern suburb of the southern city of Sidon. Earlier in the week, clashes between supporters of Sheikh Ahmad Assir, a prominent opponent of Hezbollah, and the Resistance Brigades, a pro-Hezbollah group, killed one person. 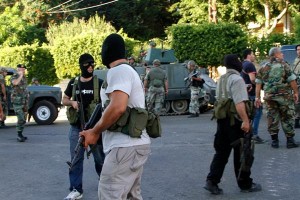