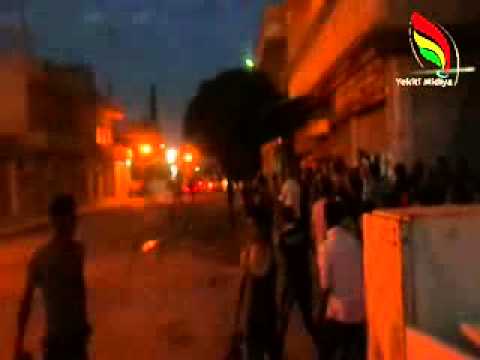 Editor’s Note: Following last night’s coverage of clashes in the Kurdish-majority town of Amuda in northeastern Syria, EA correspondent Wladimir van Wilgenburg brings more details of the incident and the intricate politics in the area — offering insight into how the Syrian conflict is not simply a matter of regime and pro-regime forces fighting “the opposition”, but of a complex web of local groups and their interests.

On Thursday evening, after a unit of the Kurdish People’s Defence Units (YPG) clashed with protesters after returning from the Hasakah -Derbisiye Road. the YPG fought with troops from the Free Syrian Army (FSA), killing at least four people and wounding 20.

According to websites supporting the Democratic Union Party (PYD) — which has tried to manouevre between the Assad regime and the insurgents — a “mercenary group” attacked the YPG, killing one of its members (named as Îsa Selah Gulo) and 3 attackers.

Kurds in Amuda have been holding sit-in protests after three activists were arrested on charges of drug dealing 10 days ago. Deaths were reported in an earlier clash between the Asayish — the Kurdish security organization and the primary intelligence agency operating in Iraqi and Syrian Kurdistan — and an armed group dealing in hashish.

Thursday’s incident will likely lead to more tensions between the PYD, which is affiliated to the Turkey’s Kurdistan Workers Party (PKK), and Kurdish parties close to Iraq’s Kurdistan Democratic Party, headed by Masoud Barzani.

These are far from the first clashes to occur in Amuda, with skirmishes between youth groups and the YPG.

Thursday’s fighting also comes in the wake of earlier tensions between the Kurdish Democratic Party and the PYD, after the arrest of pro-KDP trained militia on 18 May when they crossed the Turkish border. That incident led to a temporary border closure.

Later fights broke out on 25 May between Islamist groups and the YPG around the Kurdish area of Efrin, near Aleppo and the Turkish border, which led to a Free Syrian Army embargo against the PYD. The FSA accused the PYD of charges of assisting the pro-regime Shiite villages of Al-Nubul and al-Zahra.

More protests are expected to take place in Amuda on Friday. While pro-PYD groups will likely link the events to alleged plots by Turkey — and possibly Barzani — ahead of a proposed international conference on Syria, anti-PYD groups will probably claim that the violence proves the YPG and PYD are working with the Syrian government.