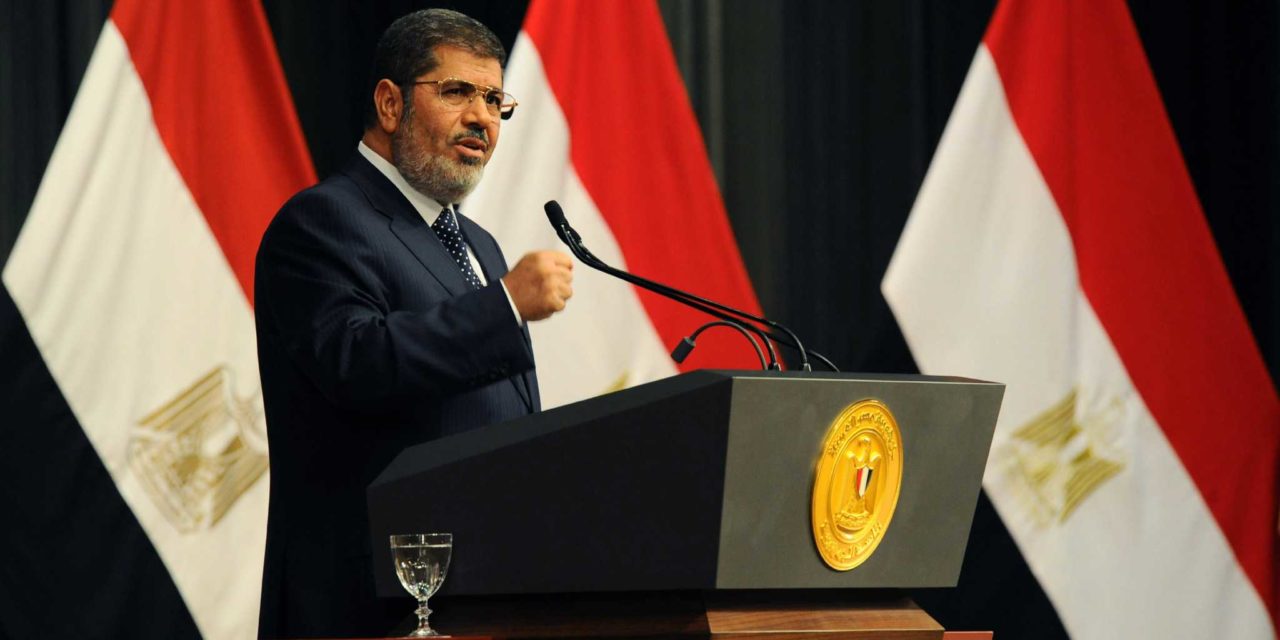 Large protests for and against the Government have already begun in Egypt, ahead of Sunday’s call by the opposition for a mass rally on the first anniversary of President Morsi’s inauguration.

Today’s pro-Government protest, “Legitimacy is a Red Line”, has been announced by the Islamic Alliance, a coalition of parties led by the Muslim Brotherhood’s Freedom and Justice Party (FJP). The main gathering will be in front of Rabaa Al-Adawiya mosque in Cairo’s Nasr City.

Last night, an attack on the FJP’s headquarters in Morsi’s hometown of Zagazig in the Nile Delta left one dead and 26 injured.

Street battles across the north have taken one life and wounded more than 200 in Mansoura, injured 53 in Sharqiya, and hurt two in Gharbiya.

The Muslim Brotherhood and FJP have portrayed Government opponents as “thugs” linked to the Mubarak regime that was overthrown in February 2011:

A US citizen has been stabbed to death amid clashes in Alexandria, according to a doctor and three security officials.

The man died from a wound to the chest, said General Amin Ezzeddin, a senior Alexandria security official. The account was confirmed by Ibrahim al-Roubi, head of the emergency unit in the Alexandria health department.

The Muslim Brotherhood have released a statement vowing to take legal action against the opposition National Salvation Front, remnants of the Mubarak-era National Democratic Party, and the “Rebel campaign” promoting Sunday’s anti-Government protests, accusing them of being responsible for the burning of the Freedom and Justice Party’s headquarters in Alexandria.

Claimed footage of a man wielding a gun and threatening to shoot at Muslim Brotherhood supporters, while others try to restrain him:

One person has died and more than 70 have been injured in fighting in Alexandria, as protesters surrounded the offices of the Muslim Brotherhood and set them on fire.

A hbspital director said the dead man was hit by birdshot.

Reports are coming in that protesters have set several office of the Muslim Brotherhood on fire, including those in in Gharbiya, Kafr El-Sheikh and Daqahliya.

A photograph from the Smouha neighborhood of Alexandria:

Security forces have confronted a group of villagers trying to prevent the construction of a gendarmerie facility in Lice in Diyarbakır Province in the southeast, with injuries reported.

The demonstrators set some tents on fire, according to the Hurriyet daily, with police using tear gas and firing warning shots as protesters tried to get into the construction site.

Ahram Online reports crowds at protests backing President Morsi are smaller than at last Friday’s rally, attended by hundreds of thousands, and “the energy of the crowd is also lower with chant leaders struggling to energise the crowd”.

Egypt: Military Out In Force As Demonstrations For And Against President Morsy Kick Off In Cairo

Al Ahram reports that dozens of young people gathered in front of the Mostafa Mahmoud Mosque in the Mohandessin area of Giza to call for the departure of the regime. The protesters carried flags of Egypt and pictures of President Mohamad Morsy, and chanted slogans against the Muslim Brotherhood.

Twitter user @ManarMohsen reports that hundreds of people have gathered in Cairo’s Tahrir Square on Friday afternoon, to protest against Morsy. At 12:30 GMT, Mohsen reported that while numbers were quite low, protesters expected more people to arrive as marchers reach the square.

Some of the posters protesters are waving:

As usual, some protesters like to showcase their creative signs. #Tahrir pic.twitter.com/GXO5hKqMyf

The numbers in #Tahrir are growing, but remain low. pic.twitter.com/s1es1l5mKv

Meanwhile, CBC’s Derek Stoffel reports that Egypt’s military is out in force in Cairo, with tanks and troops on the ground, and helicopters flying overhead. Stoffel shares these images of pro-Morsy supporters in Cairo:

Supporters of Egypt's president #Morsi chant at a demonstration in Cairo. pic.twitter.com/33Ye38mHjq

Minister of Transport, Maritime Affairs and Communications Binali Yıldırım has warned companies that refuse to cooperate with the government’s efforts to combat cyber “crimes” should expect to receive an “Ottoman slap.”

Responding to the reluctance of a number of social media websites to sharing data about the Gezi Park protests with the government, Yıldırım said “The Turkish Republic doesn’t recognize those who don’t recognize it. 79 million [people] will hit them with an ‘Ottoman slap.’” Facebook and Twitter have both recently denied claims that they agreed to share data with Ankara regarding posts made by their members about the Gezi Park protests.

Yıldırım added that the government was comfortable with the free use of the Internet but using it to incite violence and crime was “unacceptable,” saying “They shouldn’t behave swaggeringly, feeling as if millions of users stand on their side.”

Istanbul Governor Hüseyin Avni Mutlu has said that Gezi Park – focal point and catalyst of widespread anti-government protests – will be opened again to the public in a few days as municipality work continues at the site. Mutlu told reporters “The work will be completed within a few days, and the park will be open to public use,” while attending a public relations awards ceremony. It is unclear exactly who was receiving awards for their public relations…

The NSF reiterated its demand for an early presidential election, a new government and constitutional amendments, saying “The president’s address reinforced Egyptians’ belief about Morsi’s inability to fill the position of president.” The statement also criticised Morsi for not referring to his “failure” to administer the country during his first year in office or his “numerous and dangerous mistakes.”

The statement asserted that “Morsi’s speech only deepens our resolve to press our demands for early presidential elections in order to achieve the aims of the revolution, most important of which is social justice.” As protestors began to erect tents in Tahrir Square yesterday in anticipation of anti-government protests – the site of huge demonstrations against the Mubarak regime – the NSF expressed its belief that Egyptians “will come out in the millions in peaceful protests that will fill Egypt’s streets and squares on Sunday.”