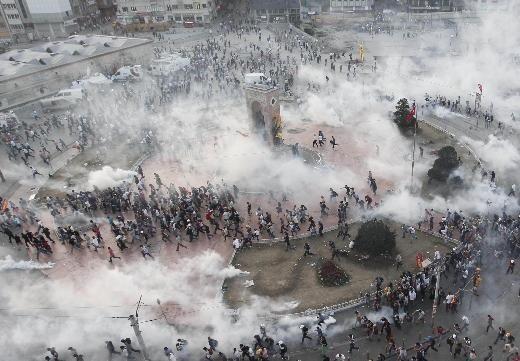 On the 12th day of mass protesters against the Turkish Government, hundreds of police moved into Istanbul’s Taksim Square overnight.

Witnesses said police, backed by armoured vehicles and wielding shields as they moved around barricades, fired teargas to scatter small groups of demonstrators occupying the Square.

“Every place is Taksim, every place resistance,” the protesters chanted.

The governor of Istanbul, Huseyin Avni Mutlu, said on Twitter that police were there only to remove banners and placards.
.
Protesters are trying to re-convene this morning.

The security forces also renewed their operations against protests in Ankara, using water cannon and tear gas in Kızılay Square and Kuğulu Park in the early hours of today to dismantle tents. Demonstrators fled to side streets.

In Adana, protesters were challenged by police when they attempted to march toward the Akkapı District to join demonstrators who clashed with supporters of the ruling Justice and Development Party (AKP) on Monday night.

The Taksim Square sit-in began on 28 May to protest Government plans to cut down trees and re-develop near-by Gezi Park, one of the last major green spaces in Istanbul. Three days later, police moved violently to disperse the demonstration — the backlash led to a mass rally in Taksim Square with a spread of demonstrations across the country.

Prime Minister Recep Tayyip Erdogan has remained defiant, despite conciliatory noises from President Abdullah Gul and Deputy Prime Minister Bulent Arinc. He has said that the re-development, which features the construction of a replica Ottoman-era military barracks, will not be stopped, and he has framed the protesters as a small group of foreign-infiltrated lawbreakers who do not command popular support.

On Monday, Erdogan had said he was willing to meet with some of the protest leaders, but he returned to aggressive language yesterday.

LATEST UPDATES, FROM TOP TO BOTTOM

Mayor of Istanbul Kadir Topbas has said that police will continue operation “until Taksim Square is cleared”.

Taksim Battle continues down side streets beyond square, with water cannons deployed…

Emre Peker of The Wall Street Journal sends the message:

#Turkey releases 49 lawyers detained earlier at a courthouse not for from Taksim Sq for staging protest to support #occupygezi: @cnnturkcom

With renewed police operations against protesters in Taksim Square tonight, Richard Engel of US NBC News reports — in gas mask — from the scene: 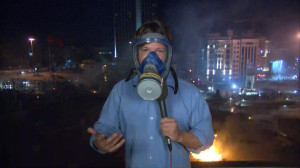 #Turkey‘s Taksim Sq. looks like a war zone, wonder what happened to #occupygezi protesters in the park as police teargassed all around it.

Many fires are lit. People are chanting and cheering. twitter.com/Timcast/status…

More than 50 lawyers, who have been defending Gezi Park protestors following the police crackdown, have been arrested themselves at the Caglayan courthouse in Istanbul.

Doğan news agency reports that around 100 lawyers are outside the police station demanding the release of their colleagues as a Special Forces Unit intervened, forcing some lawyers to fall to the ground.

#Turkey‘s police assault steps at #occupygezi park, now starting to withdraw in sign it’ll be a day of back & forths twitter.com/wsjemre/status…

In a speech to parliament, Prime Minister Erdogan has once again defended his response to the protests and thanked the police for clearing Taksim square and removing “rags” – the protestors’ banners – from the Ataturk monument.

The Prime Minister showed no sign of contrition, stating “If my reaction is considered too tough. Then I’m sorry. I am Tayyip Erdogan, I can’t change that.”

Violent actions that took place in many cities of Turkey have camouflaged themselves behind the Gezi Park protests. I request all activists to see the big picture, understand the plot, and withdraw from the streets…

What were we supposed to do? Kneel in front of these people and ask them remove the banners? How would those illegal rags be removed from public buildings?

Freedom and intervention in lifestyles are excuses used by the protesters. The hotels in Taksim are now 80 percent empty, the shopkeepers in Taksim are suffering – except the beer sellers. This is intervening with others’ freedom.

There is sustained chatter on social media that those who threw Molotov bombs at police this morning were not protesters, but “provocateurs” trying to stigmatise the demonstrations.

Video footage on the website of the daily Hurriyet shows a small group of four of five “demonstrators” lobbing cocktails at police. But their attempts are suspiciously theatrical and inept – with the “demonstrators” at one point advancing in a hopeless Roman-style assault.

Turkish state media have broadcast footage of these encounters live, in stark contrast to the early days of the protests, marked by police brutality, which it failed entirely to report.

A protester makes the claim in an interview with The Guardian:

From the Associated Press:

CBC’s Derek Stoffel is livetweeting the Taksim protests. He notes that most Turkish TV stations have stopped showing live footage of Taksim Square and are instead showing President Erdogan’sspeech to Parliament. Meanwhile, protesters say they will not leave the square.

Taksim protestors rebuild a barricade minutes after a bulldozer tore it down. #turkey twitter.com/DerekStoffelCB…

Amid ongoing tensions between Iraq’s ethnic Arabs and Kurds, the army’s 16th Brigade — famous for being roughly half Arab and half Kurdish – has split in two, with the Kurdish spokesman for the brigade, Rekawt Mohammed, saying “We have nothing to do with the Iraqi army anymore.”

Iraq’s semiautonomous Kurdistan Regional Government plans to formally incorporate the 1,200 troops, as well as the territory they currently control, into its own security forces.

The Guardian’s Constanze Letsch reports from the scene in Taksim Square:

The police have made public announcements saying they are not going to raid [Gezi] park, they are just going to clean up the square. But right now they just teargassed the front steps of Gezi Park. So a lot of people are being gassed and are now coughing inside Gezi Park. It is an atmosphere of massive confusion.

Protesters don’t think they [the police] are sincere after yesterday’s promises. Protesters are afraid that they are going to clear the park.

Several police and protestors injured. I saw one demonstrator get hit by a tear gas canister. He was taken by crowd to nearby medical tent.

A series of messages from Joe Parkinson of the Wall Street Journal over the last 45 minutes:

Main action on perimeter of square parallel with Gezi park. Police announcer asking protesters not to throw rocks. Some do. Police fire gas

Water cannon now in action on periphery of square towards tarlabasi. Some molotovs being thrown. Lots of gas.

A leading official of the ruling Justice and Development Party has hinted at a “legal regulation” to “set social media in order”.

Social media must be brought under order and regularity….A legal regulation could be made. People must be held responsible for the content they write. If as a result of a tweet they write, people loot shops and burn vehicles, the one who wrote it must bear its costs.

Earlier in the 12-day challenge from mass demonstratoins, Prime Minister Recep Tayyip Erdoğan called Twitter a “plague”. Dozens of people were detained, notably in Izmir, on allegations that they used social media to stir up protest, but were soon released.