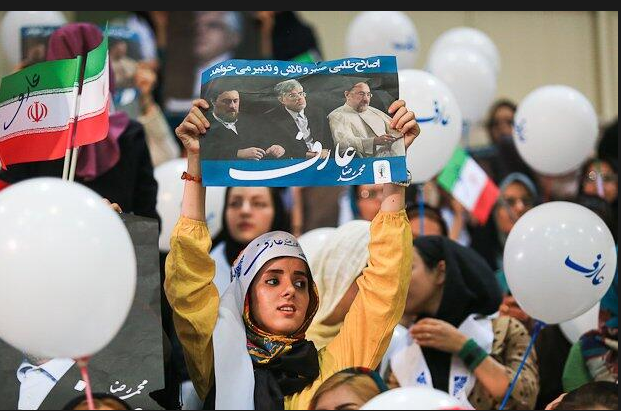 After days of deliberation, reformist Mohammad Reza Aref withdrew from the Presidential race last night in favour of the moderate Hassan Rouhani for this Friday’s first-round vote.

Aref’s decision came after a 10-person committee, backed by former President Mohammad Khatami, recommended the coalition. Other leading reformists called for a unified effort to get a man from outside the camp of the principlists — who have dominated Iranian politics, especially amid the crackdown following the 2009 Presidential election — into the final run-off on 21 June.

Now the questions are established for the next three days:

1. How effective will the moderate-reformist coalition be in attracting and organising voter turn-out?
2. Will the principlists, including the Supreme Leader’s camp, finally overcome squabbling for some version of “unity” before Friday?
3. If not, which of the principlists — Tehran Mayor Mohammad-Baqer Qalibaf, Supreme Leader advisor Saeed Jalili, or Secretary of the National Security Council Saeed Jalili — will be the strongest in the first-round ballot and move to the run-off?

Hassan Rouhani’s campaign team has tweeted that there was no debate between Mohammad Reza Aref and Rouhani over the formation of a common front for Friday’s ballot — the important consideration was not to split the vote:

Messages on the Campaign Trail

A summary of lines taken by the leading candidates, as seen by State outlet Press TV….

Hassan Rohani claimed that he will bring an end to extremist views and replace them with reforms and friendship. He also pledged to restore value of national currency and limit unemployment and inflation.

The Supreme Leader’s advisor Ali Akbar Velayati said he will will “fix the economy once and for all” and also “resolve all outstanding issues between Tehran and the West”.

Saeed Jalili, the Secretary of the Supreme National Security Council, used a televised question-and-answer session to promise “much-needed” cooperation with the judiciary and Parliament.

Rafsanjani, whose support alongside that of former President Mohammad Khatami was seen as a necessity for a reformist-moderate coalition, thanked reformist Mohammad Reza Aref for withdrawing in favour of Rouhani.

More leading reformist groups have endorsed the candidacy of moderate Hassan Rouhani after the withdrawal of reformist Mohammad Reza Aref from the Presidential race.

In addition to the Coordination Council of the Reforms Front, representing 16 organisations, and the Hambastegi Party have declared their support.

Aref himself has maintained his distance from Rouhani.

As the presidential election approaches, reports suggest that even conservative media are being targeted by Tehran’s censors, as well as opposition websites.

A protest by more than 100 media activists, including employees of semi-official news agencies released a statement criticising the “tough” and “unexpected” measures against the country’s “known and official media.” The statement adds that “multiple centers of decision making” in cyberspace is one of the main problems media face in their online activities.

It adds that a “trend” has developed in the past year whereby official media have been contacted by an unrelated body and ordered to remove certain content or face filtering.

The reformist Islamic Iran Participation Front (IIPF) has officially declared that it is endorsing the decision by Khatami’s council yesterday to back Hassan Rouhani as the presidential candidate representing moderate and reformist views.

The question of whether or not to participate in the election has been a central concern for reformists and opposition groups with the Supreme Leader’s recent declaration that a vote in the election is a vote for the Islamic Republic has been problematic for many. However, the IIPF’s announcements leaves the Mojahedin of the Islamic Revolution as the only major opposition group urging non-participation in the presidential election.

During a visit to the north-western city of Tabriz, moderate presidential candidate, Hassan Rouhani, has pledged to encourage greater participation by trade unions and professional associations in facilitating the country’s progress.

In an attempt to appeal to Iran’s ethnic minorities Rouhani also said that he will establish an academy of Azari language and literature in Tabriz and promised to provide great medicinal and financial support for people suffering from refractory and rare diseases.


Presidential candidate Saeed Jalili targets hardline religious voters with a series of comments warning that the UK and Sunni Gulf states are attempting to create divisions between Shia and Sunni Muslims.

There are many satellite TV channels launched from UK who insult Sunnis & Shias to divide muslims. #Jalili #Iranelection

Former President Khatami has issued a statement on his personal website in which he formally states that he is backing moderate candidate Hassan Rouhani.

Reformist candidate Mohammad-Reza Aref, who has dropped out of the race in favor of Rouhani in order to unite reformist, Green and moderate votes behind a single candidate, also spoke of Khatami’s backing on his website.

An EA correspondent in Iran notes of Aref that: “what is interesting in his formal withdrawal communique is that he doesn’t openly back Rouhani in it but simply says that Khatami, as “Leader” of the reformist camp, wrote him a letter stating that it is not “expedient” for him to remain in the competition, and he simply withdrew as a consequence of Khatami’s advice.”

With only a few days to go until Friday’s presidential election, a major women’s cultural organization has issued a statement to say it is backing moderate candidate Hassan Rouhani, ISNA reports.

The Women’s Society of the Islamic Republic of Iran — whose secretary general is Zahra Mostafavi, daughter of Ayatollah Khomeini — said that
the election is “one of the most basic symbols of religious democracy and most important place to resolve political conflicts.

Participation in the elections is an “integral part” of the Islamic Republic, the group said.

The group added that women should be allowed to participate in all political groups and activities and that they had a wisdom and prudence in promoting values freedom and national independence which will lead to a better future for all.

Incumbent President Mahmoud Ahmadinejad told ISNA on Tuesday morning that he has only one vote in the June 14 Presidential election. Ahmadinejad added that ‘neither the Government nor myself are supporting any particular candidate’.

Ahmadinejad’s right-hand man, Esfandiar Rahim-Mashaei, was disqualified from standing in the elections by the Guardian Council. Ahmadinejad has remained on the sidelines, and his administration has not thrown its weight behind any of the six candidates remaining in the race.

Mohammad Reza Sajjadi, Iran’s Ambassador to Russia, has told Moscow that Tehran will not be accepting the proposed offer of the Tor anti-aircraft system as a substitute for the S-300 missile system that had previously been offered.

In 2007, Russia agreed to supply at least five S-300 missile systems but President Dmitry Medvedev cancelled the sale on the grounds that it violated UN Security Council sanctions against Iran. Russia then offered the Tor system as a replacement for the S-300.

Tehran responded by suing Moscow in the International Court of Arbitration for $950 million of compensation.

Abas Aslani of Fars News posts this picture of cCandidate Saeed Jalili beung greeted by his father during a rally on Monday in his hometown of Mashhad: 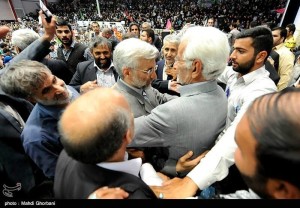