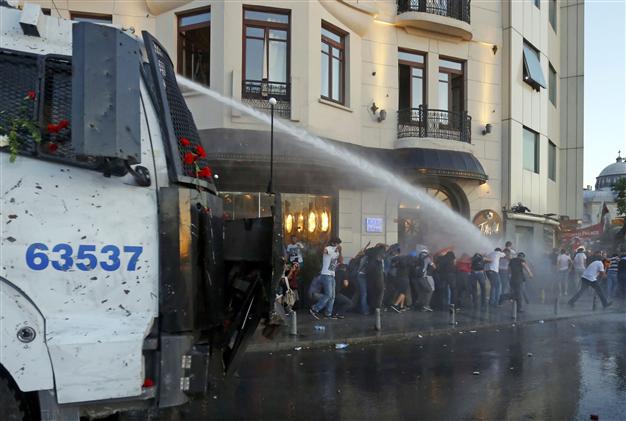 Some of the demonstrators, throwing red carnations in the air, were remembering four people killed during the three weeks of nationwide rallies against the Erdogan Government. Video and pictures showed security forces using water cannon and moving through the Square. A few demonstrators threw rocks at a police water cannon, while others tried to restrain and calm them.

The crowd in the Square refrained from political slogans, carrying no flags or banners, They chanted about the original cause of the protests, Government plans to clear the green space of nearby Gezi Park for a replica Ottoman-era military barracks: “Open park, belonging to the public.”

The police did not let protesters into Gezi Park, cleared along with Taksim Square last week. Only nine members of the Taksim Platform were allowed to lay flowers in the memory of the three demonstrators and one police officer who have died.

Police drove back protesters into side streets off Taksim Square — including the main pedestrian shopping street Istiklal — and later fired several rounds of tear gas and rubber bullets to scatter crowds who refused to disperse. Footage from the Dogan News Agency footage showed two officers hitting protesters with batons and kicking them as riot police forced their way through Istiklal street.

The daily Radikal said 30 people were treated in an infirmary at nearby building, including 10 wounded by rubber bullets. Four were taken to hospital.

Istanbul Governor Hüseyin Avni Mutlu said demonstrators were disrupting automobile traffic at Taksim Square: “The incident has come to a point far beyond than laying carnations, where the public order was disrupted. The intervention was carried out due to the hindrance of public and normal transportation and the access of taxis and buses.

Authorities charged another 31 protesters in Ankara and Istanbul on Saturday for organisation of demonstrations, damage of public property, and membership of a terrorist organization.

Sunni Muslim villagers killed four Shiite men and injured scores on Sunday, accusing them of trying to spread their version of Islam, according to Egyptian security officials.

The four were beaten to death in Giza Province, near Cairo.

About 3,000 angry villagers surrounded the house of Shia leader Hassan Shehata, threatening to set it on fire if 34 Shia inside did not leave the village before the end of the day, according to the officials. When they refused, villagers attacked them, dragged them along the ground, and partially burned the house.

The Shia were performing religious rituals outside the house when they were attacked, according to the officials.

Egyptian TV’s coverage of the incident:

The military vowed to push on with a crackdown against those that it said had carried out a “cold-blooded” attack.

Security sources said fighting that erupted after 2 p.m. and grew more intense throughout the afternoon and evening hours of the day. They said two gunmen loyal to al-Assir were killed.

The security sources said al-Assir’s fighters were relying heavily on RPGs in the clashes. One armored personnel carrier was set ablaze after receiving a direct RPG hit, they said.

Lebanon: At Least 4 Troops Killed in Clashes Near Sidon

At least three Lebanese army officers and a soldier have been killed, and 19 wounded, in a clash with supporters of a Sunni Muslim sheikh opposed to Hezbollah, according to an army statement.

“An armed group loyal to Sheikh Ahmad al-Assir attacked, for no reason, a Lebanese army checkpoint in the village of Abra,” the military said.

The clash broke out when Assir’s supporters surrounded the checkpint, on the outskirts of Sidon, where a vehicle transporting other followers of the Sunni cleric had been stopped, a security source said.

Sources told Al Jazeera the number of those killed was at least four.

Last week fighting between supporters and opponents of al-Assir killed at least one person in Sidon.

Gen. Abdel-Fattah el-Sissi, the Minister of Defense and head of the army, has warned that the military is ready to intervene to stop the nation from entering a “dark tunnel” of internal conflict.

Opponents of the Morsi Government have called for mass rallies next Sunday.

El-Sissi urged all parties to act before then to reach a “genuine” agreement to defuse the crisis: “The armed forces are calling on everyone to find a way of understanding, consensus and true reconciliation in order to protect Egypt and its people; we have [a week] to achieve a lot.”

Bahrain: Concern over Detention of Man Who Tweeted About Imprisoned Father

The Bahrain Center for Human Rights has expressed “grave concern” over the detention of Jaffar Al-Demstani, soon after he posted on Twitter about the treatment of his imprisoned father.

On Wednesday, Al-Demstani wrote that his father, nurse Ebrahim Al-Demstani — serving a three-year sentence for medical treatment of protesters in 2012 — had refused to attend a prison visit, protest against denial of access to a doctor for treatment of a back injury.

Jaffar Al-Demstani alleged that the back injury was the result of abuse at the hands of a colonel in the Bahraini security forces, including beating with a hammer. They are the last messages from his Twitter account.

At about 3 a.m. on Thursday, the house of Jaffar Al-Demstani was raided by armed masked men in civilian clothes, believed to be secret police of the Ministry of Interior.

The BCHR says there is no news of the whereabouts of Jaffar Al-Demstani.

Palestinian Authority President Mahmoud Abbas has accepted the resignation of Prime Minister Rami Hamdallah, who announced on Thursday that he was stepping down two weeks after taking office.

Hamdallah, the former head of al-Najah University in the West Bank, said he was resigning because of a dispute over his powers. He succeeded economist Salam Fayyad, who departed in April after months of tensions with Abbas.