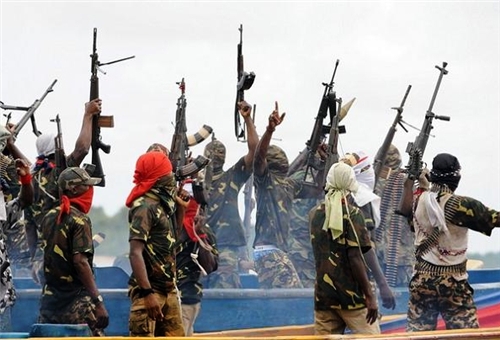 President-elect Hassan Rouhani continues to prepare for his inauguration in early August with meetings with senior political figures. Saturday’s diary included discussions with Rouhani’s mentor, former President Hashemi Rafsanjani, and reformist politicians, with the President-elect soon sitting down with MPs for the first time.

These chats, however, offer little significant in public statements, so Iranian media have to look elsewhere for headlines.

Enter Fars News, connected with the Revolutionary Guards, and their menu of plots, plots, plots.

This morning Fars’ English-language service offers “Most Salafis Fighting in Syria Come From Afghanistan“, declaring they are “affiliated to the al-Qaeda”. There are “Iraqi Plants Producing Chemical Arms for [Syrian] Rebels“. A “senior Iranian cleric” urges “the world Muslims to keep vigilant about the divisive plots exercised by the enemies”, while the deputy head of armed forces, Massoud Jazayeri asserts, “US Protégés Readying for Terrorist Operations in West“.

Sotoudeh has been detained since September 2010.

Journalist Jila Bani Yaghoub has been released after serving her sentence in Evin Prison.

Bani Yaghooub and her husband, fellow journalist Bahman Ahmad Amoui, were arrested at their home five days after the disputed 2009 Presidential election.

In 2010, Bani Yaghoub was tried and convicted for “spreading propaganda against the system” and “insulting the president”. She was sentenced to one year in prison, with a 30-year ban on practicing journalism. On 2 September 2012, she was summoned to begin the prison term.

Ahmad Amoui is still in prison, serving a sentence of five years and four months.

The Iranian currency, besieged and losing 70% of its value in 2012, is continuing its rise after the election of Hassan Rouhani nine days ago.

The Islamic Republic has maintained its push to join any international “peace” talks on Syria, with Foreign Minister Ali Akbar Salehi declaring on Saturday, “If invited, we will definitely take part at the international Geneva conference.”

Russia and US declared in early May that there would be a gathering in Geneva — initially scheduled for June — with the Syrian regime, opposition, and foreign parties. However, arrangements have stalled over the opposition’s pre-condition that President Assad step down, and Washington and its European allies have not welcomed Tehran’s involvement.

Last week, in a possible shift, French President Francois Hollande says Paris would accept the participation of Iranian President Hassan Rouhani if it was “constructive”.