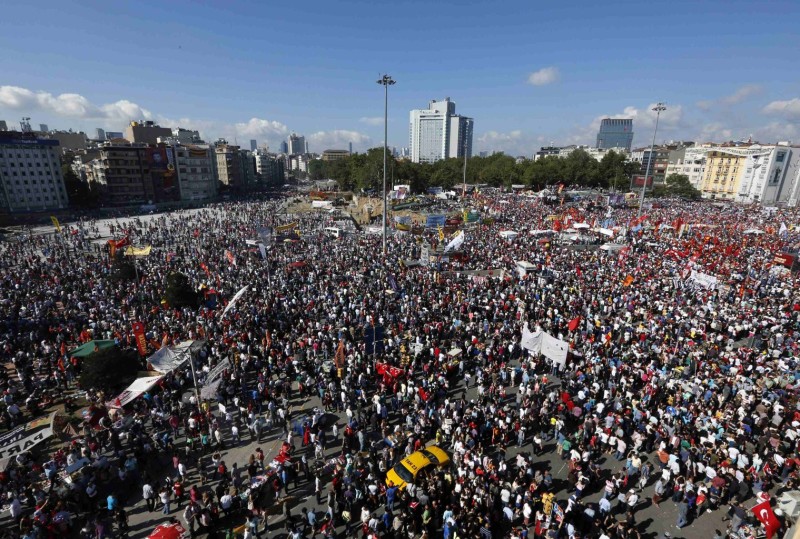 In the latest swipe at social media for supposedly causing three weeks of nationwide protests, the Erdogan Government has said it will prevent the opening of fake accounts on Twitter, Facebook, and other sites.

Deputy Prime Minister Bekir Bozdağ declared, “Tweets are being sent from those accounts. Provocations are being done against people. To avoid all these things, there are some regulations being made to make this place used correctly.”

On 31 May, police attempts to break up a protest in Istanbul’s Taksim Square — challenging Government plans to re-develop nearby Gezi Park, one of the city’s last green spaces — only fuelled the demonstrations and spread them across the country.

Bozdag said, “Making people stand up against each other with hatred, segregating people according to religion, language and classification and inciting people to commit crimes against each other is a crime in today’s laws and regulations. The police authorities are investigating these issues. Actions will be taken about them.”

Latest Updates, Most Recent At The Top

A photograph of the crowd who rallied for President Mohamed Morsi after Friday prayers in Cairo: 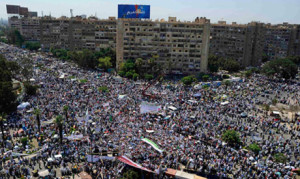 The demonstration was a show of strength before opposition protests on 30 June, the first anniversary of Morsi’s inauguration.

Demonstrators held banners in support of the President and chanted “Islam is the solution” and “the Qur’an is the Constitution.”

Some held Egyptian flags, while others held flags with the logo of the Muslim Brotherhood, or black flags emblazoned with the slogan “no God but God”.

One of a series of photographs on Ahram Online: 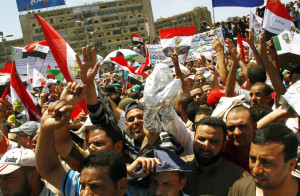 Turkey: Minister of Finance, “No Journalist Has Been Jailed for Journalism”

The Turkish Minister of Finance responds to his country’s designation as the world’s top jailer of members of the press:

There is not a single journalist in jail for journalism! Some are in jail for bank robbery, some for murder etc… @LexiconNY @pressfreedom

The Committee to Protect Journalists has found:

With 49 journalists imprisoned for their work as of December 1, Turkey emerged as the world’s worst jailer of the press. Kurdish journalists, charged with supporting terrorism by covering the activities of the banned Kurdistan Workers Party, made up the majority of the imprisoned journalists. They are charged under a vague anti-terror law that allows the authorities to equate coverage of banned groups with terrorism itself.

As the Syrian conflict continues to spill over into Lebanon, the Lebanese Army on Friday sealed off the area around parliament in Beirut following a protest over the conflict in Syria as well as domestic issues, including growing sectarian tensions.

Reuters report that around 100 protesters took part in a demonstration on Thursday, and 20 camped out overnight, saying they were showing solidarity with residents of the Sunni town of Arsal in the Bekaa region following a police investigation into the shooting of four Shia men on Sunday.

Also on Friday, the Lebanese Army urged citizens to avoid sectarian conflicts, after protesters burned tires in the Bekaa, the North and Beirut. The Army also said that gunmen had opened fire on military checkpoints.

The government has launched a campaign called “Morsi First Year” aimed at promoting the achievements of the President’s first year in office.

The launch of this new campaign coincides with the large Islamist protest which commenced on Friday in support of the president. It also comes just nine days prior to the Tamarod campaign’s call for demonstrations against Morsi, which claims to have gathered 15 million signatures supporting its call for early presidential elections.

Egypt: Ministers, Governors Ordered Not to Deal Directly With US Embassy on Aid

The Council of Ministers has sent a letter to a group of ministers and governors ordering them to not deal directly with the US Embassy in Cairo about American aid to the country. The letter states that all aid must be organised and delivered via the US Agency for International Development in coordination with the Ministry of International Cooperation.

The families of a number of Egyptians detained in UAE prisons have rejected trials amid reports that they have suffered torture and harassment by UAE authorities. In addition, their defence teams have been denied access to their clients raising questions about the possibility of genuinely fair trials.

Among the relatives, Mariam Gaafar, daughter of detained journalist Ahmed Gaafar, said: “The referral for trial came right after Egypt’s Upper House (Shura Council) session which discussed and criticized the UAE position which clearly violates human rights, while we demanded full and unconditional release of our loved ones. They are referred to trial now simply to spite Egypt and its people and to put pressure on them. We will not accept and will not keep quiet regarding this absurd situation.”

Recent changes in the municipal government of Basra have raised the possibility of tension between the city’s new officials and the central government in Baghdad over questions regarding the role of foreign oil companies, which could have repercussions for their operations in the area.

In recent elections Prime Minister Nouri al-Maliki’s coalition lost control of the governorship of Basra province, which went to the Al-Muwatin (The Citizen) bloc of the Shiite cleric Ammar al-Hakim who is working closely with another cleric, Muqtada al-Sadr. Al-Monitor quotes a source in the prime minister’s office as saying, “Maliki was extremely angry when Hakim and Sadr decided to ally with one another and exclude Maliki’s State of Law Coalition from the governor’s office of Basra.”

Hakim’s bloc has stated that the previous government of Basra “was negligent with the central government concerning the right to participate in managing the oil fields, which is laid out in Article 12 of the Iraqi constitution.”

A leading figure in the bloc, Ahmad al-Sulayti, said that “The previous governor of Basra belonged to the prime minister’s central bloc; for that reason, the city’s role in the process of concluding contracts with foreign companies was extremely limited, since the former governor gave up that right to the prime minister.”

Sulayti added that “The Iraqi constitution contains an explicit provision according local governments the right to share in the administration of the oil fields discovered before 2005, when Iraq’s permanent constitution was being written. This has not happened in Basra,” he said, stressing that “The local government in Basra has not been given any role worth mentioning in the process of investing in oil fields; Baghdad has taken an exclusive monopoly on the entire process.”

I condemn the “price tag” attack in the Arab Israeli village of Abu Ghosh on 18 June. The racist graffiti and vandalising of property in Abu Ghosh follows a series of similarly appalling incidents in Israel and the Occupied Palestinian Territories, reportedly carried out by extremist settlers. Settler violence is an abhorrent phenomenon which must be tackled firmly.

I welcome the widespread condemnation of these attacks in Israel and the Israeli Government’s stated intention to bring those responsible to justice. We are discussing progress in prosecuting the perpetrators of such attacks and the need for decisive action during the visit this week of the Israeli Attorney General Yehuda Weinstein.

A Jewish Israeli man has been killed by a guard near Jerusalem’s Western Wall after he was apparently mistaken for a Palestinian militant.

A police spokesman said that the guard shot the man after hearing him shout “Allahu Akbar” (God is great, in Arabic) at about 7:40 local time (0440 GMT).

Deputy Prime Minister Bülent Arınç has denied reports that he tried to resign due to a rift between himself and the Prime Minister over the government’s response to the Taksim and Gezi Park protests.

In a statement, Arınç said, “Reports stating that I left the Cabinet, and that I resigned from my posts, and that my cabinet colleagues tried to convince me, and that I only changed my mind after the president’s intervention, are completely untrue.”
Arınç suggested that the report was an attempt to by certain sections of the media “isolate our prime minister and make him look bad.”