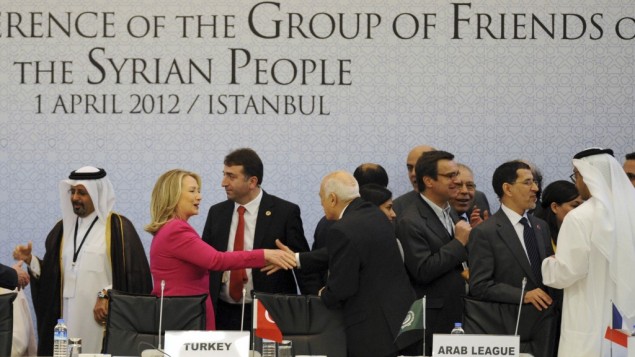 On Saturday, Foreign Ministers of the 11 leading countries in the “Friends of Syria” group will meet in Qatar to discuss the supply of weapons to the insurgency.

But how far will they get?

Last week’s Obama Administration announcement that it will give arms overtly for the first time was followed by a series of pull-backs from US officials, including the President, over the extent of the aid. On Thursday, French Foreign Minister Laurent Fabius said more talks with the insurgency’s leadership were neededL “There is no question of delivering weapons in conditions that we aren’t sure about and that means we won’t deliver weapons so that they are turned against us.”

There have been unconfirmed claims that fighters in Aleppo have received anti-tank weapons from Saudi Arabia, but even these are limited to a shipment of 40-year-old Russian-made, shoulder-fired missiles.

So, amid Thursday’s fighting in Syria’s largest city and throughout the country, especially Idlib Province in the northwest, will Arab States, European nations, Turkey, and the US put more chips into the pot, fold their cards…

…or do nothing at all?

Footage: March In Amman, Jordan In Support Of Syrian Insurgents

This video shows a march in Amman, Jordan on Friday to show solidarity with the Syrian insurgents:

Claimed Footage of Insurgents Fighting in Southern Town of Daraa

Putin: Why Does US Want To Supply Arms To Groups It Says Are Linked To Al Qaeda?

Russian President Vladimir Putin said on Friday that the issue of arms supply to Syrian should not be oversimplified, and that the Syrian conflict should not be seen as a confrontation between Russia and the US.

“This is a simplified view of a global process,” Putin said in a statement at the Petersburg International Economic Forum.

Putin added that Russia’s partners could not answer the question of why they were supplying weapons to Syrian opposition forces “linked to Al Qaeda”.

“If the US has officially recognized the links of several factions with Al Qaeda, how can it give these opposition groups weapons? Where will [the weapons] wind up? There are no answers to these questions, our partners cannot give an answer,” Putin was quoted as saying.

Syria To File Claims Against Tunisia Over Conflict

Al Watan claims that Damascus plans to file the claims in the International Court of Justice, and that the Syrian government has collected a large dossier of evidence against the Tunisian government.

Residents of Kafranbel, in Idlib Province, link the passing of James Gandolfini to the conflict:

Anti-Assad song in the Bustan al-Qasr section of Aleppo:

Spin Or Reality? FSA Claims Insurgents Received Arms, A Day After Calls To Friends Of Syria For Weapons

FSA claimed Friday that it has received “new types” of weapons from outside sources, and that a new shipment was expected in the next few days.

The claim, by FSA political and media coordinator Louay Almokdad, comes just a day after he called on the Friends of Syria group, set to meet this weekend, to provide insurgents with heavy weaponry to fight the Assad regime.

“We’ve received quantities of new types of weapons, including some that we asked for and that we believe will change the course of the battle on the ground,” Almokdad told AFP on Friday.

On Thursday, Almokdad appealed to Western and Arab ministers ahead of Saturday’s meeting in Doha, telling AFP that:

“We need short-range ground-to-air missiles, (shoulder-fired) MANPADS, anti-tank missiles, mortars, and ammunition…We also need communications equipment, bullet-proof vests and gas masks…If they do not provide us with arms to protect civilian areas, a humanitarian disaster will occur because regime troops are committing massacres in the areas they are recapturing.”

So is Friday’s announcement merely spin? Almokdad would not elaborate on where the alleged weapons shipments were coming from, what they consisted of or who was supplying them.

As the Syrian conflict continues to spill over into Lebanon, the Lebanese Army on Friday sealed off the area around parliament in Beirut following a protest over the conflict in Syria as well as domestic issues, including growing sectarian tensions.

Reuters report that around 100 protesters took part in a demonstration on Thursday, and 20 camped out overnight, saying they were showing solidarity with residents of the Sunni town of Arsal in the Bekaa region following a police investigation into the shooting of four Shia men on Sunday.

Also on Friday, the Lebanese Army urged citizens to avoid sectarian conflicts, after protesters burned tires in the Bekaa, the North and Beirut. The Army also said that gunmen had opened fire on military checkpoints.

US, Russia To Talk Syria In Geneva Next Week

Officials from the US and Russia are to travel to Geneva next week to discuss proposals for an international peace conference, UN spokeswoman Corinne Momal-Vanian said on Friday.

Senior officials from Moscow and Washington will meet Lakhdar Brahimi, the international mediator on Syria to talk about the peace conference, which was initially expected to take place in June or July but has been pushed back until at least August after Russia and the G8 failed to agree on the key issue of a transitional government.

Footage of mortar strikes on Qaboun, northern Damascus on Friday. The Syrian National Council warned on Thursday that Qaboun, along with the northern Damascus neighborhood of Barzeh, are at risk because civilians in these areas are suffering food shortages and lack medical supplies.

This video, posted by the Qaboun Neighborhood Coordination center early Friday morning, shows where an artillery shell fell in Qaboun:

In a memorandum to the Arab League, Lebanese President Michel Sleiman said that his country had always abided by a policy of dissociation from the conflict in Syria and that Lebanon called for Syria’s sovereignty, independence and unity.

Valerie Amos, the head of the United Nations relief agency, has told the UN Security Council that it must consider support of cross-border supplies into Syria amid “increasing violence and complete disregard for human life and dignity which has reached unprecedented levels during past weeks”.

Amos said, after briefing the 15-member Council, “We should look at every single way to help 6.8 million people who are in need in Syria, including not just cross-line but also across borders. I have to put it to the Council the fact that if we were able to bring in supplies from the Turkish border it is only 56 kilometers to Aleppo.”

The official blamed the regime for blocking relief efforts: “I also have to put it to the council that the Syrian government is against this because they see this as a border which is controlled by the opposition.”

Both insurgents and Syrian State media report on Friday morning on the heavy clashes in Aleppo.

Syrian State media appears to now be using “Jabhat al-Nusra” as well as “terrorists” as a blanket term for the insurgency, without distinguishing between different factions. A video statement made by insurgents before the insurgent offensive in Aleppo included a list of factions involved, and did not mention Jabhat al-Nusra.

This footage shows the Shohada Badr Brigade praying “on the battlefield” in Aleppo’s Karm al-Jabal neighborhood:

The head of the UN relief agency on Thursday called on the UN Security Council to back cross-border relief supplies to Syria — a move opposed by Bashar al-Assad’s government.

In a briefing to the UN Security Council, Valerie Amos said Syrians were increasingly suffering and that over the past weeks, “violence and complete disregard for human life and dignity” had reached “unprecedented levels”.

Amos later told reporters that she suggested to the council that the UN could bring supplies across the Turkish border, which is just 56 kilometers from Aleppo.

“I also have to put it to the council that the Syrian government is against this because they see this as a border which is controlled by the opposition,” Amos added, according to AFP.

The Local Coordination Committees claim 96 people were killed on Thursday, including 36 in Damascus and its suburbs and 17 in Aleppo Province.

The Violations Documentations Center records 64,144 deaths since the start of the conflict in March 2011, an increase of 87 from Thursday. Of the dead, 49,331 are civilians, a rise of only 61 from yesterday.