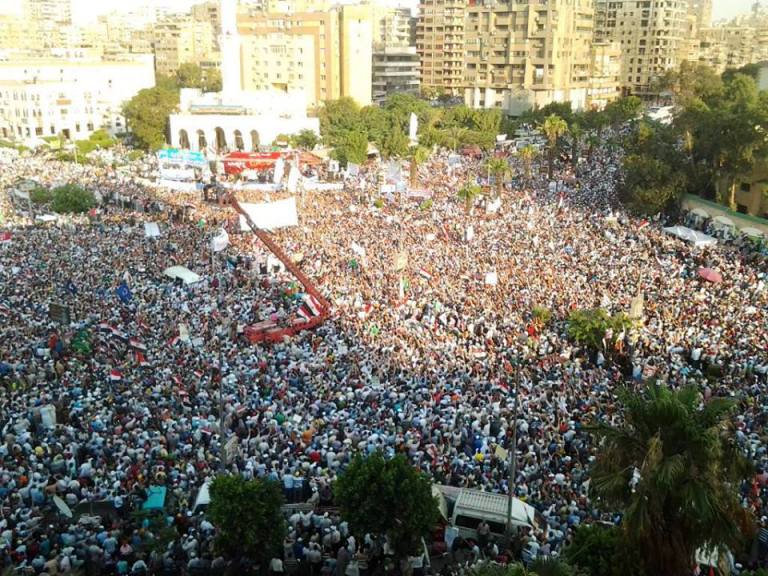 Egyptian daily al-Ahram reports that as many as hundreds of thousands of supporters of Egyptian President Mohamed Morsi rallied on Friday outside the Rabaa al-Adawiya mosque in Nasr City, Cairo.

Demonstrators at the rally waved Egyptian flags, Muslim Brotherhood banners, and banners with the slogan “There Is No God But Allah”, according to Al Ahram. Al Jazeera report that demonstrators also carried banners saying “Yes to respecting the will of the people”.

Al-Ahram also reported that among the demonstrators were “dozens of Muslim Brotherhood members” from other governorates.

The rally was organized ahead of planned anti- Morsi protests on June 30, the anniversary of Morsi’s inauguration.

Al-Ahram notes that 17 Islamist parties have announced their support for the pro-Morsi rallies, including the Freedom and Justice Party, the Wasat Party, Al-Gamaa Al-Islamiya’s Building and Development Party, and the Salafist Watan and Asala parties.

CNN Arabic reported on Saturday that violent clashes broke out between pro- and anti-Morsi supporters in Alexandria, but there were no immediate reports of casualties.

Turkish Prime Minister Recep Tayyip Erdoğan has told members of his ruling party that the ongoing protests in Turkey are linked to Thursday’s mass demonstrations in Brazil.

“The same plot is being laid in Brazil. The symbols, the banners, Twitter and the international media are the same. They are doing everything they can to accomplish what they couldn’t achieve in Turkey,” Erdoğan said.

Claimed footage of police using water cannon and then moving through Istanbul’s Taksim Square tonight, trying to disperse protesters who had re-gathered after last weekend’s operations by security forces:

A week after being cleared by police from Istanbul’s Taksim Square, the focal point of three weeks of nationwde protests sparked by Government plans to re-develop nearby Gezi Park, demonstrators have returned to the Square and are trying to get into the park:

Crowd chanting back to cops "you open the park we'll open the road" pic.twitter.com/KGWJaux3vP

Egypt: Morsi Rebuts Calls That He Stand Down, Warns Of Conspiracies

Egyptian President Mohamed Morsi said on Saturday that antigovernment protests scheduled for June 30 — the anniversary of his inauguration — reflected the freedoms brought by the 2011 Egyptian Revolution.

In an interview on Saturday with State-owned newspaper Al-Akhbar, Morsi said if the country elected another President in 2016, he would ensure that power is handed over according to the constitution.

The President also warned that the government had new information about conspiracies plotted against Egypt, which he said was a “natural target” because of its strong regional influence. Morsi did not reveal which elements or countries were plotting against Egypt, but said that “attempts to interfere in our affairs are increasing.”

The President went on to say that large amounts of illegal drugs had flooded the market, a phenomenon that was having a deleterious effect on young people.

Morsi said that the authorities had seized large quantities of drugs in the past months, including hashish. Drug use resulted in young people living in a “state of disorientation and lack of awareness such that they cannot achieve their development”, the President said. Morsi also blamed a conspiracy of “remnants of the former regime”, and noted that the country was in a transitional phase.

The full text of the interview (in Arabic) is available here.

Dubai has plans to open two new, very different, theme parks — the first devoted to the Quran, while the second has a rather more secular theme, and will be devoted to the popular mobile game, Angry Birds.

The United Arab Emirates city is set to open its $7.3 million Quran theme park next year, which will feature ” a garden with plants mentioned in the Islamic holy book and an air-conditioned tunnel depicting events from the Quran”, as well as more secular features like “children’s play areas, an outdoor theatre, fountains, a glass building, a desert garden, a palm oasis, a lake, a running track, a cycling track and a sandy walking track”, according to Arabian Business.

Angry Birds is extremely popular in another Middle Eastern country — Israel — which has used the mobile game to explore issues relating to the the peace process: