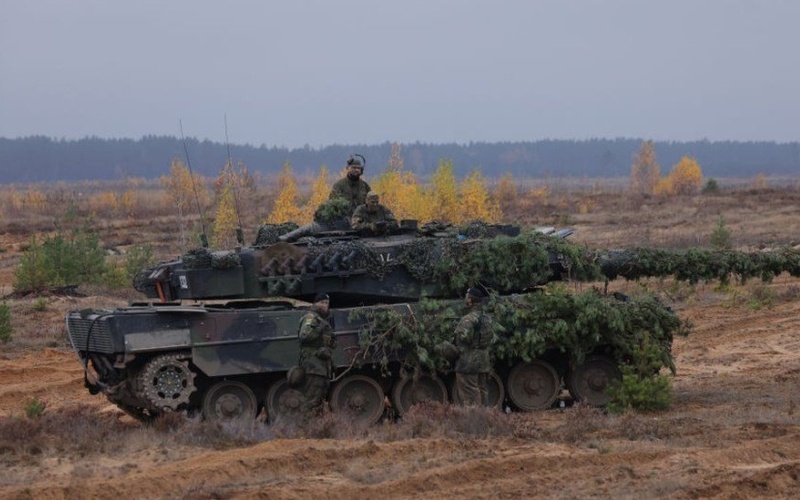 A German Leopard tank on a military exercise (Getty)

Sunday’s Coverage: Zelenskiy at Brovary Memorial — “The Indescribable Sadness Is Covering The Soul” 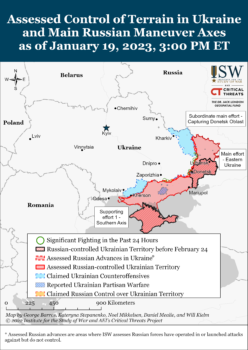 It seems Germany’s not going to ban the exporting of these weapons, if some EU member states who have them, want to send them.

The European Union has approved another €500 million ($544 million) in military aid to Ukraine.

Another €45 million ($49 million) for “non-lethal equipment” will be provided.

Germany is in a holding pattern over the possible supply of Leopard 2 battle tanks to Ukraine.

Foreign Minister Annalena Baerbock, who said on Sunday, that Berlin will not “stand in the way” of Poland sending Leopards to Ukraine, did not repeat the line on Monday morning.

She told reporters at a meeting of the European Union’s foreign affairs council in Brussels, “It’s important that we as an international community do everything to defend Ukraine, so that Ukraine wins. Because if it loses Ukraine will cease to exist.”

Government spokesperson Steffen Hebestreit said Germany has not received a request from Poland or any other country for the transfer of the Leopard2 tanks to Ukraine.

“There are procedures for this,” Hebestreit said. “To this hour we have not received a request.”

Ukraine Presidential Chief of Staff Andriy Yermak posted on Telegram, “We need tanks — not 10-20, but several hundred. Our goal is [restoring] the borders of 1991 and punishing the enemy, who will pay for their crimes.”

Morawiecki said the step would be taken as part of an international coalition.

“We will ask for such permission, but this is an issue of secondary importance. Even if we did not get this approval…we would still transfer our tanks together with others to Ukraine,” he told reporters. “The condition for us at the moment is to build at least a small coalition of countries.”

Morawiecki referred to the statement of German Foreign Minister Annalena Baerbock that the Scholz Government would not veto the delivery.

Pressure makes sense, because this weekend, the foreign minister of Germany sent a slightly different message that gives a glimmer of hope that not only Germany will not block but will finally hand over heavy equipment, modern equipment to help Ukraine.

#Germany will find itself in international isolation if it does not agree to supply #Leopard tanks to #Ukraine, said #Polish Secretary of State Ministry of Foreign Affairs @arekmularczyk. pic.twitter.com/8bmKaA068E

Just a kind reminder: Ukraine officially asked Germany to supply Leopard tanks on 3 March 2022, on the 7th day after russia started a war of annihilation against the Ukrainian statehood &🇺🇦nation. Today is the 334th day of barbarian🇷🇺war. Maybe it’s time to speed up this process? pic.twitter.com/C3N2C6pelT

Six letter bombs were sent to government, military and diplomatic targets in late November and early December. The campaign failed to break Madrid’s support for Ukraine, instead authorities stepped up security and re-committed their backing of Kyiv against Vladimir Putin’s invasion.

Spanish investigators who worked with US and UK counterparts conclude that the GRU’s Moscow-based 161st Special Purpose Specialist Training Center used the Russian Imperial Movement, a radical group with members and associates across Europe.

The Russian Imperial Movement, which operates military-style training centers in St. Petersburg, was labelled a terrorist group by the US in 2020.

The US officials assess, “The apparent aim of the campaign was to signal that Russia and its proxies could carry out terrorist strikes across Europe.”

The GRU has been involved in an escalation of the Kremlin’s “hybrid warfare”, from shooting down a Malaysian civilian airliner over Ukraine in 2014 to interfering in the 2016 US presidential election.

The GRU’s Unit 29155 has tried to destabilize Europe through attempted coups and assassinations, including Bulgaria, Moldova, Montenegro, the Czech Republic, and the UK.

A statement said the tanks were modernized in the Czech Republic before delivery.

The Ukraine Cabinet has dismissed Deputy Minister of Infrastructure and Communities Development Vasyl Lozynskiy, accused of receiving a $400,000 bribe.

The Cabinet said in a statement on Sunday, “The government of Ukraine is guided by the principle of zero tolerance for corruption and continues to build anti-corruption infrastructure.”

The National Anti-Corruption Bureau of Ukraine detained Lozynskiy on Saturday, allegedly as he was receiving $400,000 in cash. If convicted, he faces up to 12 years in prison.

NABU said the the money was a kickback for rigging a state procurement tender. Lozynskiy and accomplices allegedly planned to keep part of the $46 million that the state allocated for the purchase of generators and other equipment last summer.

The Bureau said that 150 employees are involved.

I want this to be clear: there will be no return to what used to be in the past, to the way various people close to state institutions or those who spent their entire lives chasing a chair used to live.

Baerbock told French television station LCI on Sunday, “For the moment the question has not been asked, but if we were asked we would not stand in the way.”

Germany’s conditions on export licenses means Berlin must approve any provision of the tanks. Poland has said it is ready to deliver some Leopards, and Finland has said it will do so as part of an international coalition.

Ukraine and some of its allies had hoped that Germany would commit to the supply of the Leopards, either directly or through third countries, at Friday’s meeting of defense minister of 50 countries.

But German Defense Minister Boris Pistorius said the Scholz Government had not yet reached a decision. He only went as far as to tell the Defense Ministry to “undertake an examination of the stocks” of the available tanks.

Polish Foreign Minister Zbigniew Rau chastised the Germans, “Ukrainian blood is shed for real. This is the price of hesitation over Leopard deliveries. We need action, now.

Latvia, Lithuania, and Estonia issued a joint statement, “This is needed to stop Russian aggression, help Ukraine and restore peace in Europe quickly. Germany as the leading European power has special responsibility in this regard.”

Germany’s attitude is unacceptable. It has been almost a year since the war began. Innocent people are dying every day….

I try to weigh my words but I’ll say it bluntly: Ukraine and Europe will win this war – with or without Germany.

The UK broke weeks of stalemate with the commitment last week to 14 Challenger 2 tanks to Ukraine. Foreign Secretary James Cleverly said on Sunday in a TV interview:

I would like to see the Ukrainians equipped with things like the Leopard 2 as well as the artillery systems that have been provided by us and by others.

I will keep having those conversations with our NATO allies and friends, to facilitate the donation of the best military equipment to Ukraine to help them defend themselves against this brutal invasion.

Before Baerbock’s statement, Defense minister Boris Pistorius, said he expected a Government decision soon; however, it would not be in haste because of multiple factor, including consequences for German security.

Chancellor Scholz — visiting Paris to mark the 60th anniversary of a treaty for Franco-German cooperation — said only that Germany was supporting Ukraine and would do so for “as long as necessary”.

French President Emmanuel Macron did not challenge Scholz. Instead, he said his Government is looking at the supply of Leclercs, the main battle tank of the French army: “Nothing is excluded.”

He added that any step would be coordinated “collectively” with allies.

Speaking with Germany’s ARD TV channel, Ukraine President Voloydmyr Zelenskiy praised Germany for the military assistance it has provided while calling for the provision of the battle tanks and more air defense systems:

We need tanks – this is the kind of equipment that we are in short supply of….There is also a shortage of shells for all of the above….

Air defense systems are needed to protect our skies as much as possible. I am grateful to Germany for IRIS-T. They are good systems, we would like to get more of them. Scholz promised, let’s believe the Chancellor. We will be waiting. And, of course, NASAMS, Patriot.