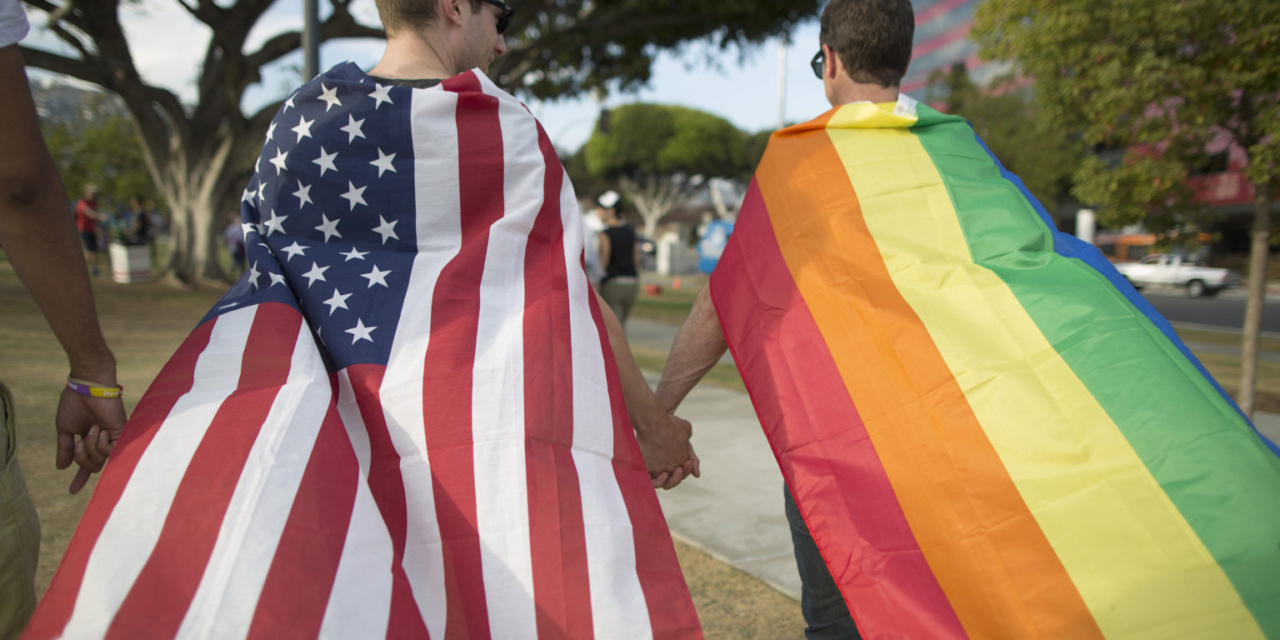 Thousands of activists and other attendees joined the President and Congressional leaders on the South Lawn. Biden said:

Today is a good day. A day America takes a vital step toward equality. Toward liberty and justice, not just for some, but for everyone. Everyone

Toward creating a nation where decency, dignity and love are recognized and honored and protected.

The President implicitly noted how Congress — with about 20% of Republicans joining Democrats — responded to a threat to the status of same-sex marriages from Supreme Court Justice Clarence Thomas.

It’s one thing for the Supreme Court to rule on a case, but it’s another thing entirely for elected representatives of the people to take a vote on the floor of the United States Congress and say loudly and clearly, love is love. Right is right. Justice is justice.

Congress has completed passage of legislation to ensure federal protections of same-sex marriages.

The House gave final approval on Thursday in a 258-169 vote. President Joe Biden will now sign the bill into law.

House Speaker Nancy Pelosi said before the vote, “Today, we stand up for the values the vast majority of Americans hold dear: A belief in the dignity, beauty and divinity — spark of divinity — in every person, and abiding respect for love so powerful that it binds two people together.”

In a statement, Biden praised “a critical step to ensure that Americans have the right to marry the person they love”.

Of the House’s 213 Republican members, 39 joined Democrats to ensure passage. Others maintained a bitter opposition to the protections.

This bill only serves to further demonize biblical values. This is yet another step toward the Democrats’ goal of dismantling the traditional family, silencing voices of faith and permanently undoing our country’s God-woven foundation.

But Democrat Sen. Tammy Baldwin, the lead sponsor of the bill in the Senate, explained:

[This will] put to rest the worries of millions of loving couples who are concerned that someday an activist Supreme Court may take their rights and freedoms away.

We are giving these loving couples the certainty that their marriages are legal and that they will continue to have the same rights and responsibilities and benefits of every other married couple.

The US Senate passed legislation on Tuesday to ensure federal protections for same-sex marriages.

The Respect for Marriage Act passed 61-36, with 12 Republicans joining all 49 Democrats who voted. It now goes to the House for a vote expected as soon as next week.

President Biden said in a statement that the vote reaffirmed “a fundamental truth: Love is love, and Americans should have the right to marry the person they love.”

On the Senate floor, an emotional Majority Leader Chuck Schumer spoke of his daughter and her partner: “I want them to raise their child with all the love and security that every child deserves. The bill we are passing today will ensure their rights won’t be trampled upon simply because they are in a same-sex marriage.”

He later celebrated the outcome with them.

I just called my daughter and her wife—who are expecting a baby next spring—to let them know that this Senate passed the Respect for Marriage Act!

What a great day! pic.twitter.com/K3ZKM7r5Zo

Republican Sen. Cynthia Loomis of Wyoming spoke passionately about the need for tolerance in the “turbulent times for our nation”, “For the sake of our nation today and its survival, we do well by taking this step.”

And Democrat Sen. Michael Bennet of Colorado noted last week’s killing of five people in an LGBTQ nightclub in Colorado, “As a nation, we will never flourish if we choose to depend on a permanent underclass deprived of some or all of the freedoms others enjoy.”

Still, 36 Republicans — 75% of the GOP Senators — opposed the legislation. Sen. Mike Lee of Utah insisted the Act was responding to a “fantasy” and an “imagined threat” while declaring, “On the other hand, we have current, real, sustained, ongoing assaults on religious freedom.”

Republican Sen. Susan Collins of Maine, part of the bipartisan group which built support for the legislation through the summer, responded, “We are talking about our family members, our neighbors, our co-workers, our friends. It advances the rights of couples, same-sex and interracial couples, who are married to one another, and it advances religious liberty.”

ORIGINAL ENTRY, NOV 17: In a 62-37 vote, the US Senate has advanced legislation for federal protections for same-sex marriages.

Twelve Republicans joined all 50 Democrats to ensure advance of the Respect for Marriage Act. The final measure of the bill is expected to be passed by the Senate after Thanksgiving next week. It then goes to the House for confirmation.

Even though Republicans will have a narrow majority in the House from January, the law is likely to stand: last summer 47 House Republicans joined Democrats in adopting a version of the legislation.

The Act does not require any state to allow same-sex couples to marry; however, it repeals the Defense of Marriage Act, which denies federal benefits to same-sex couples.

Senate Majority Leader Chuck Schumer of New York hailed “one of the true highlights of the year for this body” and “one of the more significant accomplishments of this Senate to date”.

He noted on the Senate floor that his daughter and her wife were expecting a baby in the spring. He wanted “them, and everyone in a loving relationship, to live without the fear that their rights could one day be stripped away”.

Still, 37 Republicans including Senate Minority Leader Mitch McConnell of Kentucky continued their holdout against the protections. They defied polling that more than 70% of Americans, including a majority of Republicans, support same-sex marriage.

Responding to a Supreme Court Threat

The campaign for the Act began over the summer after arch-conservative Justice Clarence Thomas — in an opinion overturning the 1973 precedent of Roe v. Wade for abortion rights — said the Supreme Court “should reconsider” precedents enshrining access to contraception and marriage equality for all Americans.

Some Republican senators jabbed that the protections were unnecessary. Marco Rubio of Florida tried to divert from the issue, “I don’t know why we’re doing that bill; there’s no threat to its status in America. I know plenty of gay people in Florida that are pissed off about gas prices.”

John Cornyn of Texas proclaimed a Democratic political stunt “that somehow that decision by the Supreme Court is in jeopardy. I don’t believe it is.”

But Democrat Sen. Tammy Baldwin of Wisconsin, the lead sponsor of the legislation, said gay people were “scared for good reason”.

Baldwin, the first openly gay woman to be elected to the House and then the Senate, explained:

The Supreme Court should not be in a position to undermine the stability of families with the stroke of a pen….

[Justice Thomas] was essentially providing an open invitation to litigators across the country to bring their cases to the Supreme Court.

Republican Sen. Susan Collins of Maine added that even without an imminent threat, “there is still value in ensuring that our federal laws reflect that same-sex and interracial couples have the right to have their marriages recognized, regardless of where they live in this country”.