Ukraine War, Day 252: Zelenskiy — “We Will Do Everything To Give People Electricity and Heat” 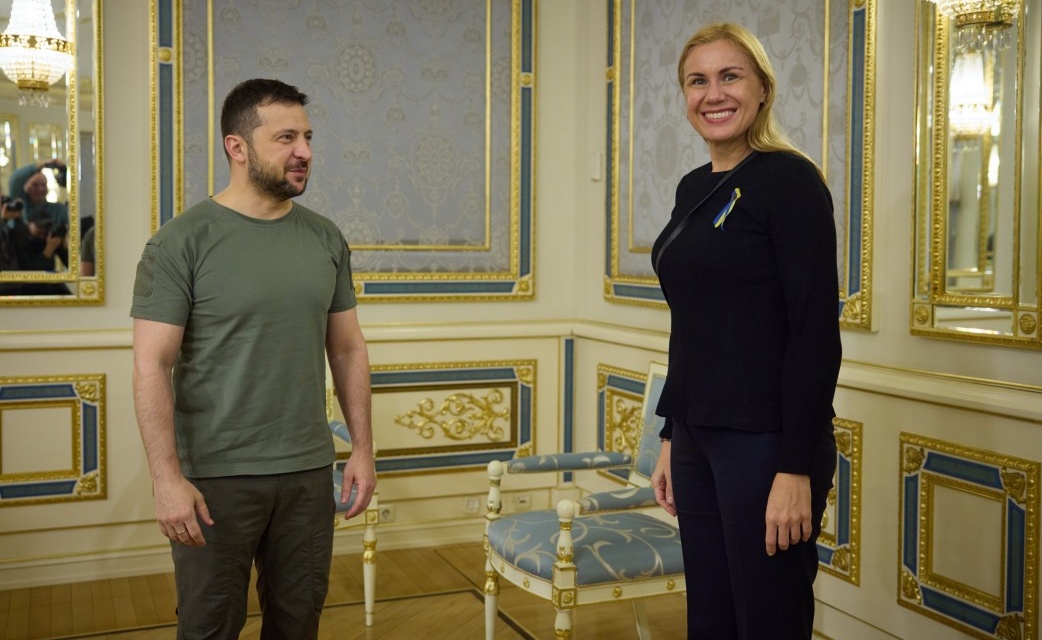 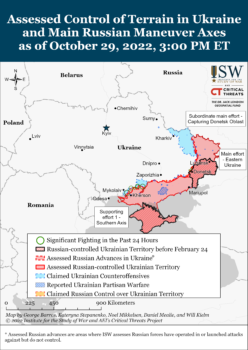 Zelenskiy thanked Erdoğan, who spurred Russia’s retreat in a call with Vladimir Putin earlier on Tuesday. The Turkish leader refused to support Moscow’s suspension and reimposition of a blockade on Ukrainian ports.

Zelenskiy tweeted his gratitude for Erdoğan’s “steadfast support of the sovereignty and territorial integrity of Ukraine”.

Erdoğan said “the ability of Ukraine and Russia to sell grain was of critical importance for the whole world”. He added that ”diplomatic efforts should be increased to end the war with a just solution”.

Switzerland has followed the European Union in sanctioning an Iranian firm and three Revolutionary Guards officers over Tehran’s supply of attack drones to Russia.

UN Secretary General António Guterres has welcomed Russia’s return to the Ukraine Black Sea grain deal, and hopes for the renewal of the agreement when it expires on November 19.

The Secretary General continues his engagement with all actors towards the renewal and full implementation of the initiative, and he also remains committed to removing the remaining obstacles to the exports of Russian food and fertilizer.

Ukraine Presidential advisor Mykhailo Podolyak has summarised the significance of Russia’s U-turn, reversing its suspension of the July deal allowing ships to move grain out of Ukraine’s Black Sea ports.

He said of the failure of “escalation and threats”:

One way or another, Russia, embarrassed, returned to the “grain initiative” because it suddenly turned out that the grain corridor would work even without the Kremlin’s participation.

This says only one thing: Russia is always inferior to those who are stronger, those who know how to take a blow, those who argue their position strongly….

When you want to play blackmail, it is important not to outplay yourself.

Russia is used to constantly playing on escalation and threats. But if there is a firm position on the part of the other parties, the mediators, the guarantors, then it quickly becomes clear the threats are just formidable international PR.

Billionaires Alexander Abramov and Alexander Frolov, linked to the steel manufacturer Evraz, had their UK assets frozen for their role in “sectors of major significance” to the Russian invasion of Ukraine.

London said the two men have a combined property investment of more than £100 million in the UK.

Shaimiev is the CEO of OAO Tatatodor, a state-owned transport and constructions company. Shigabutdinov is the general director and CEO of the AO TAIF group of companies, which operate in the energy, financial services, and information communication sectors.

The Kremlin has capitulated in its threat to renew the blockade of Ukraine’s Black Sea ports, rejoining the July deal to permit shipments only four days after suspending participation

The Defense Ministry covered the retreat, claiming that it had written guarantees that Ukraine would not “use the grain corridor for combat actions against Russia”.

Kyiv Governor Oleksiy Kuleba says 16,000 homes in the region are still without electricity.

Kuleba said the power will be restored to all residents during Wednesday; however, there will be shutdowns for stabilization.

From Matthew Luxmoore of the Wall Street Journal:

Walk through a major Ukrainian city after dark these days and you'll see people finding their way home by torchlight, sitting at home with candles lit, or driving along streets illuminated only by their car headlights. @Serhiikorovayny documented these results of Russian strikes. pic.twitter.com/vbNCoATmHb

With UN and Turkish assistance, 12 ships departed on Monday and another 40 were being inspected. However, a backlog of more than 200 vessels needs to be processed.

In a phone call with Turkish leader Recep Tayyip Erdoğan on Tuesday, Vladimir Putin demanded “real guarantees” from Ukraine before renewing the deal. He said Moscow must have assurances “about not using the humanitarian corridor for military purposes”, even though there is no evidence that Ukrainian forces are doing so.

Ankara rebuffed Putin’s approach. Turkish Defense Minister Hulusi Akar, who has spoken twice with Russian counterpart Sergey Shoygu, said the ships will continue to sail: “We conveyed to our colleagues that everyone needs to be careful about the security of the grain corridor, avoid interference, and provocations.”

Akar emphasized that Turkey expects Moscow to reconsider its suspension as the shipments are a “purely humanitarian activity which should be separated from the conflict conditions”.

Iran is preparing to send about 1,000 additional weapons — including surface-to-surface, short-range ballistic missiles as well as attack drones — to Russia to use in its war against Ukraine, according to “officials from a western country that closely monitors Iran’s weapons program”.

The missiles would be the first sent by Tehran to bolster Vladimir Putin’s failing invasion.

Yuriy Ihnat, the spokesperson for Ukraine’s Air Force Command, said one type of Iranian missiles will have a range of 700 km (430 miles) and the other 300 km (185 miles).

There is a high probability that they will be delivered to the north of Ukraine, from where they can be launched to threaten the entirety of Ukraine.

Ukraine’s Defense Ministry said on Tuesday that Iran intends to send more than 200 attack and surveillance drones “via the Caspian Sea to the port of Astrakhan”. The UAVs will be delivered in parts and reassembled by Russian forces who will put on applied Russian markings such as “Geranium-2”.

The Ministry said Russia has deployed 400 of 2,500 drones provided by Iran, with more than 300 intercepted by air defense.

Iran Foreign Ministry spokesman Nasser Kan’ani lied again that Tehran has not sent any drones to Moscow for use in Ukraine.

Kan’ani told a Croatian newspaper, in an interview published on Tuesday, “Iran strongly opposes war and the arming of either side in the Ukrainian conflict….Iran has had defense cooperation with Russia for many years but we did not support the war against Ukraine.”

President Volodymyr Zelenskiy has pledged all efforts to ensure electricity and heat for Ukrainians this winter, amid the challenge on ongoing Russian attacks against infrastructure.

In his nightly address to the nation, Zelenskiy spoke about Monday’s Russian assault with 55 cruise missiles — 40 of them shot down — and other munitions across Ukraine. He said the “technical possibility” of water supply has been restored for all Ukrainians, and of electricity for most while “stabilizing blackouts continue in nine regions”.

He then looked ahead:

They do not care about the cost of energy terror.

He turned the domestic effect back on Moscow, “If you look at the cost of yesterday’s Russian attack alone, the missiles and drones used cost Russia the equivalent of more than 2,300,000 average Russian old-age [monthly] pensions.”

They are hopeless on the battlefield. Ukrainian warriors have already proved it. But it takes time, it takes effort, it takes patience to prove that even the hope for winter will not come true for Russian terrorists. I’m sure we’ll get through it.

An Energy Meeting with the EU

The President said Ukraine has had to suspend export of electricity to Europe. However, he is “sure that we will restore everything, and in a calmer time, when the situation in our energy system will be stabilized, we will continue exporting electricity”.

He emphasized the need for a European contact group to support Ukraine’s economic recovery from the Russian invasion.

More than 30% of the energy infrastructure in #Ukraine has been affected by 🇷🇺’s targeted attacks.

I assured to President @ZelenskyyUa that we are reaching out to partners to help with the dedicated support needed. pic.twitter.com/AG4GuN9f0S

A Call With Macron

He linked the energy and military situations with Vladimir Putin’s effort to break European support of Ukraine’s resistance:

The bet of terrorists for the winter is completely transparent to everyone, and this challenge should be viewed precisely as a challenge to all of Europe. Moscow will present any winter difficulties in its propaganda as alleged proof of the failure of a united Europe. Therefore, together we must prove to the terrorists that failure is a word about them, not about Europe.

The leaders agreed to a December conference in France which “covers all the challenges of winter: from energy to finance, from weapons to protecting the sky”. A second event will convene France’s business community.

The two men also evaluated Russia’s suspension of the July deal, brokered by the UN and Turkey, allowing export of grain from Ukraine’s Black Sea ports. 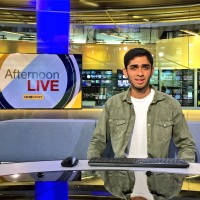