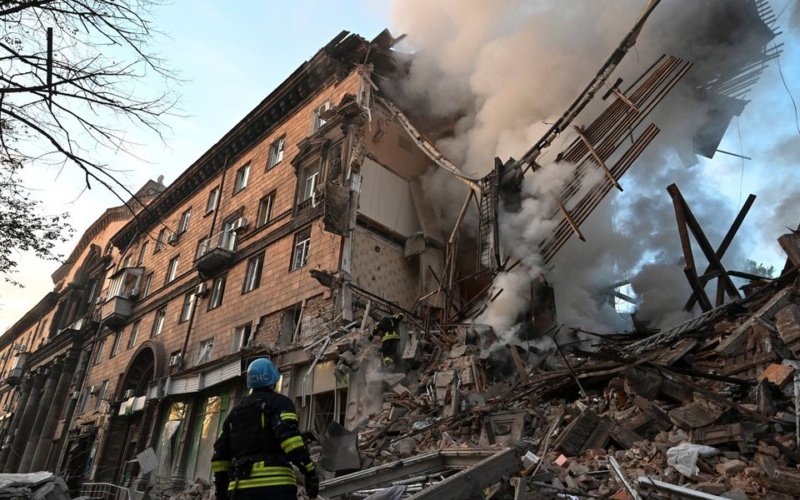 Rescuers at a high-rise building destroyed by a Russian missile in Zaporizhzhia city in southern Ukraine, October 6, 2022 (Reuters)

EA on UK Media: “Putin is Losing in Ukraine” 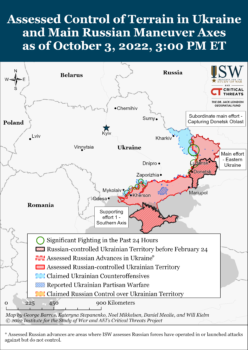 The latest restrictions expand a ban to all Russian cryptocurrency transactions, widen the ban on Russian imports, and broaden the prohibition on weapon sales to include personal arms. Electronic components that may be used Russian weapons, such as transistors, electronic integrated circuits, controllers, and aerial surveillance cameras are banned for sale. Service providers in sectors such as legal advice, architecture, engineering, and IT consultancy, are blocked from exporting to Russia.

Thirty individuals and seven companies have been added to the sanctions blacklist, including “propaganda artists” such as singers Yulia Chicherina and Nikolay Rastorguev, Russia’s electoral commission and its head, proxy Russian officials in occupied Ukranian regions, and Russian defense officials and defense-affiliated companies.

The bloc also approved a price cap on Russian oil in principle, but detains must be worked with the G7 nations — US, Canada, Japan, India, and the UK as well as EU members France and Germany.

Amid signs that Vladimir Putin may scapegoat Defense Minister Sergey Shoygu for the failure of his invasion of Ukraine, Russian proxy official Kirill Stremousov has suggested that Shoygu consider killing himself.

In a four-minute video message, Stremousov — the deputy head of the Russian-occupied part of the Kherson region, where Ukraine has broken through Russia’s frontlines — said:

Many say: if they were a Defense Minister who had allowed such a state of affairs, they could, as officers, have shot themselves. But you know the word “officer” is an incomprehensible word for many.

The death toll from Russian missile strikes has risen to three as bodies are pulled from the rubble of destroyed high-rise apartment blocks.

Governor Oleksandr Starukh and the emergency series said some residents are still trapped.

The Kremlin has hailed the decision of the OPEC+ group, of which Russia is a member, to reduce output by 2 million barrels per day.

Spokesman Dmitry Peskov said OPEC+ has confirmed its credentials as an organization responsible for market stability.

The group ignored the request of the Biden Administration to maintain current output. The cut is the sharpest since the COVID-19 pandemic in 2020.

The number of Russians applying for asylum in Finland since September 21 — when Vladimir Putin issued his order for “partial mobilization” — has reached the annual average.

The Finnish Migration Service said 308 Russians have applied in just over two weeks, compared with 200 to 500 in recent years.

Three more loud explosions were just heard in #Zaporizhzhia (at 10.35 local time). Smoke is rising from new locations in the centre of the city.

Starukh revised the toll from the earlier attack:

So far it is known about the death of one woman. The death of another person has not been confirmed. Thanks to the doctors, her life was saved. Seven people were injured of varying degrees of severity, they were treated, including one 3-year-old child….

The number of victims could have been much higher, but thanks to the timely and professional actions of the Zaporizhzhia state emergency service, 21 victims were already saved.

Vladimir Putin has issued a decree to
“correct” his partial mobilization, which has brought heated criticism within Russia while failing to alter the situation on the battlefield in Ukraine.

Putin granted deferment to those “who receive education of the appropriate level for the first time in full-time and part-time (evening) forms”. Students, graduate students, and residents enrolled in state-accredited programmes of secondary and higher professional education are also exempted.

Putin blamed the Defense Ministry for the failure of his initial plan, saying that because it “did not make timely changes to the legal framework on the list of those who are not subject to mobilization, adjustments have to be made”.

The sources think Dugin was the target, with the attackers believing he was in the car with his daughter, rather than in another in the convoy near Moscow.

The US officials said they had no role in the attack with intelligence or operational assistance. They were not aware of it ahead of time and would have opposed the bombing.

Senior Ukraine officials denied involvement in the killing at the time. They repeated the denials when asked about the US intelligence assessment.

The sources did not say which Ukrainian agencies authorized the mission, or whether President Volodymyr Zelenskiy approved it.

Ukrainian forces have found more than 50 graves in Lyman, the key town in the Donetsk region liberated on Saturday.

Some of the graves were marked with names and others with numbers.

Officials in the Kharkiv region report more evidence, from areas liberated this month, of Russia’s torture and killings.

The bodies of two civilians corpses, aged 30 to 35, were found in a grave in the village of Novoplatonivka. The left hand of a man was handcuffed to the right hand of another man. One of the skulls was fractured and the other had a gunshot wound.

Kharkiv prosecutors and police believe that the killing was carried out by some of the 250 to 350 Russian special forces stationed near the grave.

In the village of Pisky-Radkivskyi, another torture chamber has been found, said the officials.

Serhii Bolvinov, the chief investigator for the Kharkiv region, said:

Police have been made aware of the torture of burying people alive and the use of a gas mask with a smouldering rag.

ORIGINAL ENTRY: Facing the defeat of their invasion in southern Ukraine, Russia lashed out on Thursday morning with seven missiles on high-rise buildings on Zaporizhzhia city.

At least two people have been killed, and at least five are under the rubble of destroyed buildings.

Governor Oleksandr Starukh said, “Many people were saved. Among them is a 3-year-old girl, the child is in foster care. A rescue operation is underway at the scene.”

The city is in the Ukrainian-controlled part of the Zaporizhzhia region. On Wednesday, even as Ukraine’s forces were making further gains, Vladimir Putin signed laws annexing the Russian-occupied area, as well as territory in the neighboring Kherson region in the south and the Donetsk and Luhansk regions in the east.

After breaking Russian defensive lines in Kherson on Monday — advancing up to 30 km (19 miles) at points — Ukraine’s counter-offensive extended its control by six to 12 miles on Wednesday.

Ukraine President Volodymyr Zelenskiy confirmed the recapture of the villages of Novovoskresenske, Novohryhorivka, and Petropavlivka, “liberated from the sham referendum and stabilised”.

In the east, Ukrainian forces — having retaken almost all of the Kharkiv region — regained territory in western Luhansk, including the settlements of Hrekivka and Maklivka.

The positions are about 20 km (12.5 miles) southwest of the city of Svatove, a likely objective for the Ukrainian advance.

The Institute for the Study of War foresees more Ukrainian gains in the near-future:

Russian forces have failed to hold the banks of the Oskil and Siverskyi Donets rivers and leverage them as natural boundaries to prevent Ukrainian forces from projecting into vulnerable sections of Russian-occupied northeast Ukraine.

The terrain in western Luhansk is suitable for the kind of rapid maneuver warfare that Ukrainian forces used effectively in eastern Kharkiv Oblast in early September, and there are no indications from open sources that the Russian military has substantially reinforced western Luhansk Oblast.

“The Recapture Is Catastrophic”

But for the first time, Vladimir Putin implicitly acknowledged the defeat in the south as well as in northeast and east.

Putin told teachers in a video conference on Wednesday, “We are working on the assumption that the situation in the new territories will stabilize.”

Kremlin spokesperson Dmitry Peskov maintained that “there is no contradiction” between Putin’s annexations and the Ukrainian advances: “[The occupied areas] will be with Russia forever.”

But commentators on Russian State TV are no longer just repeating the Kremlin’s lines.

Leading host Olga Skabeyeva questioned a Russian proxy official in Luhansk, “Why do we advance meter by meter when they advance village by village?”.

Roman Saponkov, a war correspondent on the frontline, posted on Telegram, “I really don’t know what to say to you. The retreat…is catastrophic.”

There will be no good news in the near-future.

We do not have enough people….Fatigue has set in….There is no longer any strength left to hold on to the territories won.