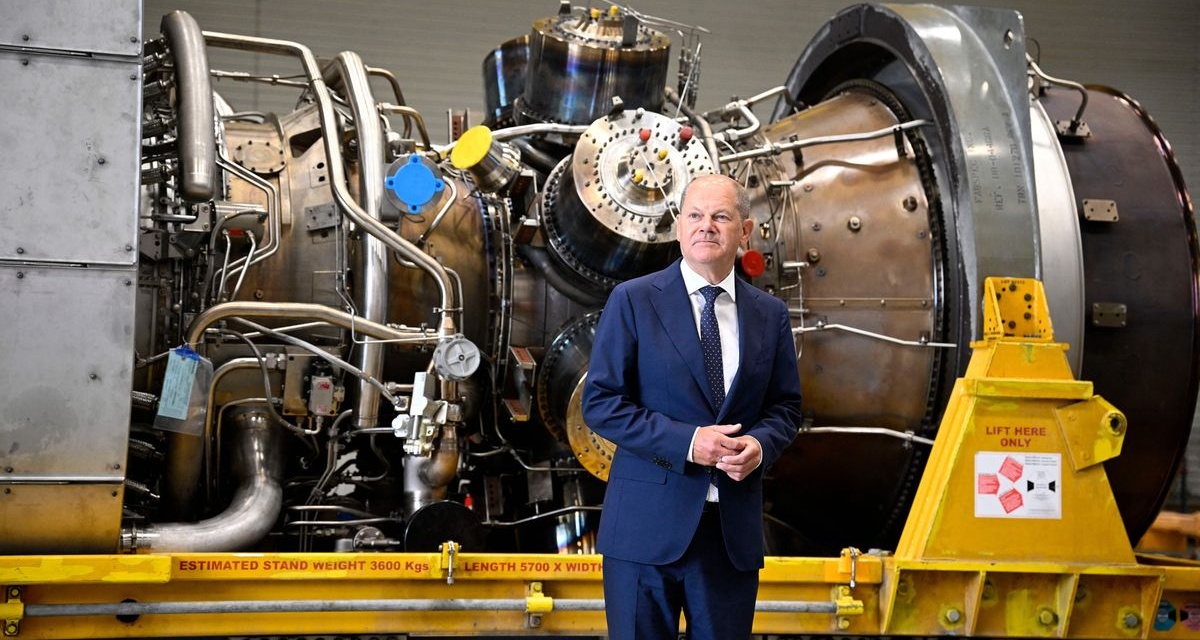 German Chancellor Olaf Scholz stands in front of a turbine for the Nord Stream 1 gas pipeline at the Siemens Energy plant in Muelheim an der Ruhr, Germany, August 3, 2022 (Sascha Schuermann/AFP/Getty)

Germany’s Siemens Energy, which manufactured the turbines for the Nord Stream 1 pipeline, has questioned the Russian pretext for suspending supply.

Siemens said that Gazprom’s blame of oil leaks is “not a technical reason for stopping operation”, as the leakages do not usually affect the operation of a turbine and can be sealed on site.

Ukraine’s military carried out strikes on Russian positions in the area around Enerhodar on Friday.

Enerhodar is the town nearest the Zaporizhzhia nuclear power plant.

The Ukrainian command said, “In the region around the towns of Kherson and Enerhodar, precise strikes by our armed forces destroyed three enemy artillery systems as well as a warehouse with ammunition and up to a company of soldiers.”

The latest Russian attacks on the Donetsk region in eastern Ukraine have killed three civilians and wounded three.

Governor Pavlo Kyrylenko said the fatalities were in Zaitseve, Vuhledar, and Bohoyavlenka.

Kyrolenko said there was also shelling of Kramatorsk, with one person injured in an attack on a food business and a light industry site struck and ablaze. Two enterprises and several houses were damaged in Slovyansk.

Slovyansk Mayor Vadym Liakh wrote, “The city was shelled again. There were loud explosions on the outskirts. In Bylbasivka, private houses were damaged on Shkilna and Yaseneva Streets.”

Russia has restricted cooperation with the International Atomic Energy Agency inspection of the Zaporizhzhia nuclear power plant in southern Ukraine, ensuring that the IAEA team did not meet any of the military occupiers.

IAEA head Rafael Grossi said upon his return from the plant that military operations are escalating near the plant, “which worries me a lot”. He explained that the Russian military was not available when he asked to speak to them about the control center. The military staff were “withdrawn” throughout the inspection, never approaching his team.

Grossi said six of his team, finally granted access to the complex on Thursday, will remain at the plant. He added that a report will be produced early next week.

ORIGINAL ENTRY: Russia has cut off its supply of gas to Europe.

Russian state energy company Gazprom extended the shutdown of the Nord Stream 1 pipeline to Germany on Friday evening, using the pretext of a “leak”.

Early Wednesday, Gazprom suddenly announced a three-day suspension for “maintenance” of the remaining turbine at the compressor station at the Russian end of the pipeline. On Friday, it extended the cutoff indefinitely, with no timeframe for a reopening.

The company said in a statement, “Gas transportation to the Nord Stream gas pipeline has been completely halted until the complaints on the operation of the equipment have been eliminated.”

The announcement came hours after foreign ministers G7 countries — France, Germany, Italy, the UK, the US, Canada, and Japan — agreed imposition of a price cap on imports of Russian oil.

The cap may be introduced alongside planned European Union embargoes on Russian oil, effective December 5 for crude oil and February 5 for refined products such as diesel.

The ministers did not give details, saying the per-barrel level of the price cap will be determined later “based on a range of technical inputs”. They emphasized that the measure will be “specifically designed” to reduce “Russia’s ability to fund its war of aggression whilst limiting the impact of Russia’s war on global energy prices, particularly for low and middle-income countries”.

Earlier on Friday, Kremlin spokesperson Dmitry Peskov threatened, “Companies that impose a price cap will not be among the recipients of Russian oil. We simply will not cooperate with them on non-market principles….One thing can be said with confidence: such a move will lead to a significant destabilization of the oil markets.”

Russia has threatened the gas cutoff for months, halting supplies to individual countries. Gazprom used the excuse of repair of a compressor in Canada to restrict Nord Stream 1’s deliveries, initially demanding return of the compressor and then blocking any work on it by its manufacturer, the German company Siemens, because of international sanctions against Moscow.

European countries are preparing with measures to limit consumption and to arrange supply through alternative sources. Germany’s storage facilities are now more than 84% full.

The head of Germany’s network regulatory agency, Klaus Mueller, said Gazprom’s latest step elevates the significance of new liquefied natural gas terminals that Germany will operate this winter; of gas storage; and of “significant needs to save” gas.

Jacob Mandel of the energy consultancy Aurora said the halt of flows through Nord Stream 1 “does not significantly alter the outlook for European imports of Russian gas from the last few weeks”.

He noted that Gazprom’s restrictions through the summer, limiting Nord Stream 1 to 20% of capacity, meant it was providing only 4% of Germany’s annual demand and less than 1% of Europe’s annual demand: “Europe’s storages are well on track to hitting or even surpassing their targets for this summer, and there’s plenty of scope to replace that gas with liquified natural gas imports for now.

However, he cautioned, “But when weather turns cold and demand starts to pick up in the winter in Europe and Asia, there’s only so much LNG out there that Europe can import to replace Russian gas.”