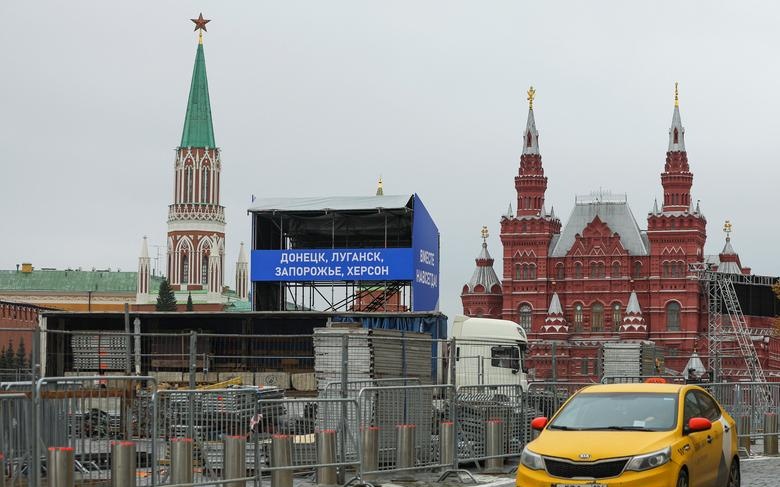 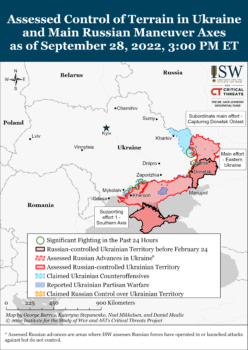 Putin has mobilized hundreds of thousands of more troops, engaged in irresponsible nuclear sabre-rattling and now illegally annexed more Ukrainian territory. Together, this represents the most serious escalation since the start of the war.

By attempting to annex Ukraine’s Donetsk, Luhansk, Zaporizhzhia and Kherson regions, Putin tries to grab territories he doesn’t even physically control on the ground. Nothing changes for Ukraine: we continue liberating our land and our people, restoring our territorial integrity.

The US has added more than Russian-linked 1,000 individuals and entities to its sanctions list.

We will not stand by as Putin fraudulently attempts to annex parts of Ukraine.

The Treasury Department and US government are taking sweeping action today to further weaken Russia’s already degraded military industrial complex and undermine its ability to wage its illegal war.

President Joe Biden followed up, “Make no mistake: these actions have no legitimacy. The United States will always honour Ukraine’s internationally recognized borders.”

We trust each other, we help each other, and we protect each other. This is the alliance. De facto. Today, Ukraine is applying to make it de jure.

Zelenskiy also posted a video message about negotiations with Russia:

Ukraine was and remains a leader in negotiation efforts. It was our state that always offered Russia to reach an agreement on coexistence on equal, honest, decent and fair terms.

It is obvious that this is impossible with this Russian president. He does not know what dignity and honesty are.

Therefore, we are ready for a dialogue with Russia, but already with another president of Russia.

European Commission President Ursula von der Leyen wrote on Twitter, “The illegal annexation proclaimed by Putin won’t change anything. All territories illegally occupied by Russian invaders are Ukrainian land and will always be part of this sovereign nation.”

The European Council said in a statement:

By wilfully undermining the rules-based international order and blatantly violating the fundamental rights of Ukraine to independence, sovereignty and territorial integrity, core principles as enshrined in the UN charter and international law, Russia is putting global security at risk….

We reiterate that the European Union firmly stands with Ukraine and will continue to provide strong economic, military, social and financial support to Ukraine for as long as it takes.

In a Kremlin ceremony, Vladimir Putin has issued his decree for annexation of the Donetsk and Luhansk regions in eastern Ukraine and the Kherson and Zaporizhzhia regions in the south.

Claiming that Russia’s staged referenda demonstrated the “choice of millions of people”, he said, “We will protect our land using all our forces and we will do everything to ensure people’s securities.”

Putin then railed about other countries:

[They are] prepared to do everything using this neo-colonial system to rob all other countries in the world….They don’t want to see us a free society. They want to see us as a crowd of slaves.

Covering a range of topics from “Russophobia” to nuclear weapons, he claimed the West’s “sheer satanism” with children “offered operations on sex changes”.

Putin, who is literally announcing a land-grab, has complained about his "neocolonial" foes about ten times so far.

Another Russian proxy official has been killed in the occupied Kherson region in southern Ukraine.

The death of Alexei Katerinichev, the first deputy head for security of Kherson, was announced by Kherson’s deputy head Kirill Stremousov.

Katerinichev was slain in a pinpoint strike by Ukraine with two rockets fired the US-supplied HIMARS medium-range system, Stremousov said.

Ukrainian forces have advance further towards the key city of Lyman in the Donetsk region, “semi-encircling” Russian forces in the rail hub.

The head of the Russian proxy “Donetsk People’s Republic”, Denis Pushilin, acknowledged the villages of Yampil and Drobysheve near Lyman “are no longer fully controlled” by Russian forces.

Referring to Vladimir Putin’s annexation of occupied areas of Ukraine, Pushilin complained that the Ukrainian army “is trying with all its might to blacken this historic event for us”.

About 5,500 Russian fighters, including troops from the 20th Combined Arms Army, are reportedly in Lyman.

Ukraine President Volodymyr Zelenskiy has written Telegram about the Russian missile strike on a civilian convoy in the Ukrainian-held area of the Zaporizhzhia region in southern Ukraine (see 0745 GMT):

Only complete terrorists can do this, who should have no place in the civilized world. The enemy rages and seeks revenge for our steadfastness and his failures. It cynically destroys peaceful Ukrainians, because it lost everything human a long time ago.

Bloodthirsty scum. You will definitely answer for every lost Ukrainian life.

Volodymyr Marchuk, a spokesperson for the Ukrainian governor’s office, told The Guardian:

It’s a logistics hub to allow people go into the temporarily Russian occupied territories. The Russians only accept 150 cars a day so that’s why we created a program, where people could come register and get their number in line.

UK military intelligence has added detail on the chaos and inadequacy of Vladimir Putin’s “partial mobilization”.

The analysts note that some mobilized reservists have been ordered to source their own first aid supplies, with the advice that female sanitary products are a cost-effective solution:

Russian troops’ lack of confidence in sufficient medical provision is almost certainly contributing to a declining state of morale and a lack of willingness to undertake offensive operations.

In a video from western Russia, posted on Thursday, Russian men complain:

We’re mobilized people. We were brought there and dropped in the field. There’s nothing here, we’re building a fire. I’m a senior reserve lieutenant of the medical service. Nobody was waiting for us. They promise [some developments] the next morning.

They didn’t give us a tent or even a stove. Our bus is gone. No one needs us. We didn’t receive dry rations, either. They didn’t pay us our enlistment bonus. We’re self-organizing now, electing superiors among ourselves.

A Russian missile strike on a civilian convoy has killed at least 23 people and wounded 28 in the Zaporizhzhia region in southern Ukraine.

Declaring a day of mourning on Saturday, Governor Oleksandr Starukh, wrote that the convoy was waiting in a regional center, on its way to deliver aid to relatives in Russian-occupied areas.

The occupiers struck defenseless Ukrainians. This is another terrorist attack by a terrorist country.

Others in the convoy were planning to return to homes in areas such as Russian-occupied Mariupol.

The missiles sprayed shrapnel on about 60 cars and vans, which were packed with belongings, blankets, and suitcases. The vehicles’ windows were blown out. A slain man leaned over from the driver’s seat, his left hand still clutching the steering wheel.

Plastic sheets were draped over the bodies of a woman and young man in the next car. A dead cat lay next to the slain man in the backseat. Two bodies lay in a white mini-van just ahead in the convoy.

Russian proxy officials are trying to blame Ukrainian forces for the mass killing.

#Russian invaders shelled a civilian humanitarian convoy at the exit from #Zaporizhzhya.

People were queuing to go to the temporarily occupied territory to pick up their relatives and deliver aid. pic.twitter.com/QQLHjD6B7o

ORIGINAL ENTRY: Facing serious difficulties on the battlefield and at home, Vladimir Putin will formally announce Russia’s annexation of occupied areas of eastern and southern Ukraine on Friday.

Putin will sign a decree in a Kremlin ceremony, less than three days after Russia’s hastily-stage “referenda” in parts of the Donetsk and Luhansk regions in the east and the Kherson and Zaporizhzhia regions in the south. He will then have a photo opportunity with the Russian proxy leaders of the occupied territories, who arrived in Moscow on Thursday.

Tipping off the announcement, Russian officials set up giant video screens and billboards in Moscow’s Red Square declaring the occupied regions as part of the country.

In the afternoon, deputies of Russia’s lower House of Parliament, the Duma, said they had received invitations to the Kremlin ceremony at 3 pm on Friday. Kremlin spokesman Dmitry Peskov soon confirmed the news.

Putin signed decrees recognising the “independence” of Kherson and Zaporizhzhia, a precursor for annexation. He issued similar decrees days before the February 24 invasion.

The Russian leader had held back from annexation, but his hand was forced earlier this month by Ukrainian counter-offensives in the south and the northeast which have liberated more than 8,000 square km (3,088 square miles) of territory.

The northeastern offensive has not only regained most of the Kharkiv region but is also re-entering Donetsk and Luhansk. The advance would not only reclaim areas seized by Russia in the invasion but challenge the proxy areas controlled by Moscow since 2014.

Putin’s trouble has been compounded by his “partial mobilization”, announced on September 20 alongside his intention of annexation. Far from rallying Russians against the counter-offensives, the chaotic and sweeping call-ups of men — including those supposedly exempt from service, too old, or even seriously ill — has spurred criticism alongside the concern over Ukraine’s recent battlefield success.

To give you an idea of why Putin's doing this: a Levada Center poll out today shows 56% of Russians are "worried" about the war in Ukraine – as opposed to 37% last month – and nearly as many said they wanted to end the war as continue fightinghttps://t.co/4nkhzdYLoW

The announcement of annexation brought resistance from Kyiv and widespread international condemnation.

UN Secretary General António Guterres said the Kremlin’s step is a “dangerous escalation”: “It would have no legal value and deserves to be condemned”.

While preparing for annexation, Putin acknowledged the failure of his twin step of “partial mobilization”.

He did not take any responsibility but said in a video conference with his security council:

This mobilization raises many questions. We must correct all the mistakes and ensure that they do not happen again….

If a mistake has been made, it must be corrected and those who were summoned without an appropriate reason should come home.

Putin the good tsar has a go at the bad boyars for mobilizing the wrong people into the army.

“We must correct mistakes and not allow them going forward,” he says, and everyone who doesn’t meet the criteria “must be sent home.”

Shows the Kremlin is anxious about the backlash pic.twitter.com/nyVWHgqLsF