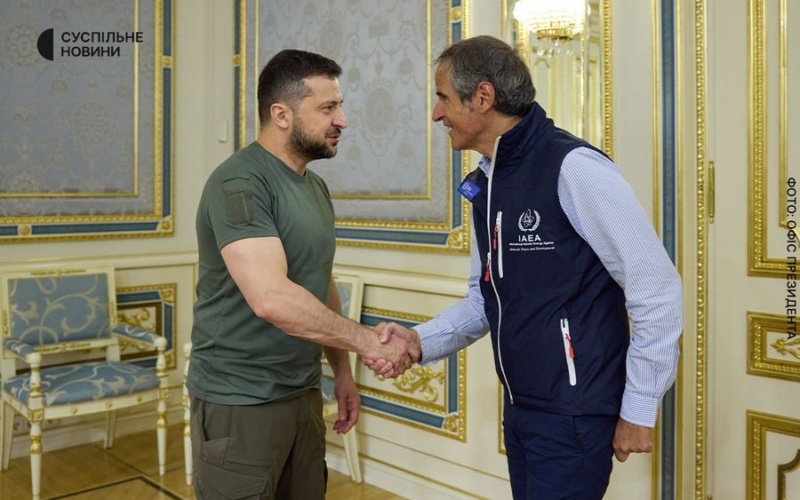 The compromise, between EU states for and against a visa ban, complicate the process for Russians and make it more costly.

The Baltic States, Finland, the Czech Republic, and Poland had sought a ban, but Germany, The Netherlands, Spain, France, and Portugal were among those in opposition.

This goes in the right direction but once again we saw that so far there has been a lot of talk and little action….

When Russia is invading Ukraine and we receive refugees from Ukraine and try to help Ukraine in every way, this is not a time for holidaymaking and luxury tourism.

Sweden is giving artillery ammunition worth about 500m krona (£46.5m) to Ukraine.

As strange as it may sound, the best way to save human lives, including the lives of civilians, and to save more Ukrainian villages and towns from destruction, is to give Ukraine more weapons so that we can repel Russian aggression and the Russian army.

Exiled Enerhodar Mayor Dmytro Orlov said one of the shells hit the city council building, and posted pictures of a high-rise building with a large hole in it.

The attack occurred as the IAEA travelled to the region. The team are now in the Ukrainian-held city of Zaporizhzhia, about two hours from the plant.

The latest Russian strikes on Mykolaiv in southern Ukraine have set grain silos on fires, according to emergency services.

Russian outlet Ridus reports that Russia’s military is keeping conscripts in hot rooms without water until they agree to sign up to fight in Ukraine.

Ridus said a recruitment center in the Tver region in western Russia has received complaints about the psychological pressure. The mother of one conscript says:

With Vladimir Putin refusing to order a general mobilization and with units suffering heavy losses in Ukraine the Russian military is facing a shortage of personnel. Under its rules, only contract soldiers can be sent to the frontlines.

Reports and video are circulating of an oil depot on fire in Russian-occupied Crimea.

The depot is in a village near the town of Dzhankoy.

The Ukraine Red Cross says Russian forces shelled its facility in the east of the country on Tuesday.

The organization said four shells from 152mm artillery damaged three vehicles, as the humanitarian workers were engaged in evacuation of and assistance to residents amid Russia’s offensive in the Donetsk region.

Staff member Taras Logginov said, “On all maps, this is marked as the Red Cross building. The Russian command knew that there were no military facilities either on the base itself or in the vicinity.”

Volunteers have operated from the Slovyansk facility since April 18, assisting evacuees, the wounded, and sick as well as providing food kits, hygiene products, material for house repairs, blankets, medicines, and drinking water.

We strongly condemn the attack on the base of @RedCrossUkraine evacuation team in Sloviansk, #Ukraine.

The #ICRC stands with the @RedCrossUkraine to reaffirm the importance of protection of civilians, humanitarians, health workers and facilities. #NotATarget pic.twitter.com/oMOrSmJCXn

President Volodymyr Zelensky has he had signed the agreement for the accession of Ukraine to the European Union’s Convention on Common Transit Procedure.

The Convention, passed by the EU in JUne, gives Ukraine visa-free road freight transportation shortly after the war-torn country had been granted an EU candidacy status.

Ukraine Finance Minister Serhiy Marchenko said Tuesday that Ukraine received a record-breaking $4.6 billion of foreign aid in August, including $3 billion in US grant funds through the World Bank.

Marchenko said Kyiv expects to receive about $30 billion of foreign aid by the end of the year, $17 billion of which has already been delivered.

UK military intelligence assesses the launch of Ukraine’s counter-offensive in the south of the country, saying it has pushed back the frontline “some distance in places, exploiting relatively thinly held Russian defences”.

The analysts say Russia will try to re-establish the line with mobile reserve units, including some diverted from Moscow’s struggling offensive in eastern Ukraine. They also note that volunteer battalions of the new 3rd Army Corps have departed their home base near Moscow.

The operational effectiveness of these units is not known. The 3rd Army Corps is highly likely short of personnel and these troops have had limited training.

Russia has again suspended gas supplies to Europe via the Nord Stream 1 pipeline for “maintenance”.

Russian State firm Gazprom said no gas will be sent to Germany between 1 am GMT on Wednesday and 1 am GMT on Saturday.

Russia also cut supplies for 10 days in July. It then restricted flows to about 20% of capacity.

Gazprom said the maintenance is needed on Nord Stream 1’s remaining compressor. However, Germany’s Federal Network Agency chief Klaus Mueller called the cutoff a “technically incomprehensible” decision, warning that it was probably a pretext for Russia’s threatened cutoff of supply.

Gazprom also said that it will halt gas supplies from Thursday to the French company Engie, claiming lack of payment.

France’s Energy Transition Minister Agnes Pannier-Runacher said Russia is using gas as a weapon of war: “We must prepare for the worst case scenario of a complete interruption of supplies.”

European Commission President Ursula von der Leyen announced on Tuesday that the European Union has filled gas storage sites to an average of 80% capacity, reaching its target a month ahead of schedule.

German officials said earlier this week that gas storage is now at 82% capacity and will reach 85% by early September.

ORIGINAL ENTRY: An International Atomic Energy Agency team is en route to the Russian-occupied Zaporizhzhia nuclear power plant, but there are concerns that Moscow’s forces will prevent any visit.

The mission set off from Kyiv on Wednesday by car for southern Ukraine to see the nuclear site, occupied by the Russians in early March and used as a military base. The inspectors will assess physical damage to the plant, operation of safety and security systems, and staff conditions, and will carry out urgent safeguards activities.

IAEA head Rafael Grossi said in a press briefing, “We are finally leaving after six months of effort….We have a very important task there – to work and examine the real situation there, to help stabilise the situation as much as possible.”

However, Ukrainian officials said on Tuesday that Russian forces are shelling the route to Zaporizhzhia, jeopardizing the mission’s security.

In his nightly address to the nation, President Volodymyr Zelenskiy summarized:

[Russia] does not stop provocations precisely in those directions from which the mission is supposed to arrive at the station.

The occupiers have not abandoned the plant — they are continuing bombardments and are not withdrawing arms and ammunition from the site. They are intimidating our personnel. The risk of a nuclear catastrophe due to Russian actions is not diminishing for even an hour.

An immediate and total demilitarisation in Zaporizhzhia is necessary.

Russia has used similar tactics throughout the Syrian conflict. The threats to security delayed or blocked inspections of mass killings by the Assad regime, including chemical attacks such as the deadly use of chlorine near Damascus in April 2018.

The Russians have refused pleas from the international community, including UN Secretary General António Guterres, to demilitarize the complex and withdraw troops, vehicles, and weapons.

Instead, the occupiers have used the shield of the reactors to fire regularly on Ukrainian-held territory across the Dnipro River.

The Russians fired on Nikopol with Grad rockets and heavy artillery overnight, injuring a 57-year-old woman. Twelve high-rise buildings, several shops, pharmacies, a college, a children’s sports school, and a cultural and sports complex were damaged.