1,000+ Iranians Sign Protest Letter About “4 Decades of Oppression of Women” 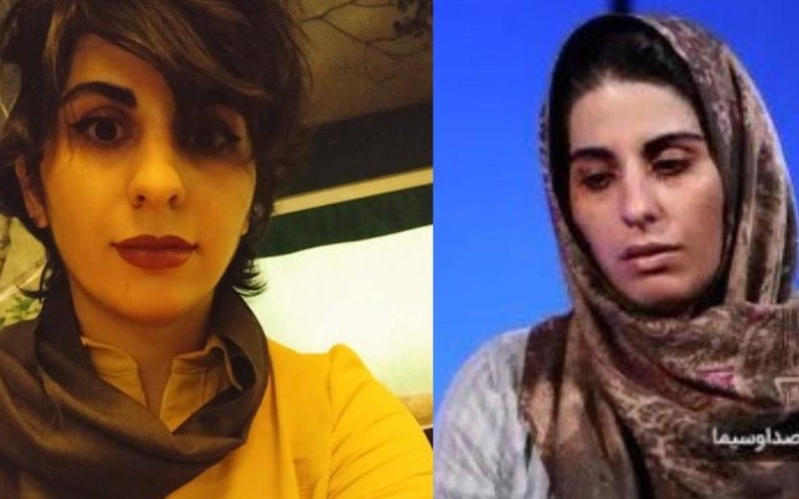 Sepideh Rashno, before and during her forced confession on State TV in August 2022, over her not wearing hijab in public

Writer and artist Sepideh Rashno has been released on temporary bail, soon after an open letter with more than 1,000 signatories cited her case as an example of “four decades of oppression of Iranian women”.

Rashno was released on Tuesday, 2 1/2 months after she was detained for not wearing hijab in public. She subsequently “confessed” on State TV.

More than 1,000 Iranian citizens and civil activists have signed a statement protesting “four decades of oppression of Iranian women”.

The letter highlights the case of Sepideh Rashno, who was arrested on June 15 after a video of her arguing with a woman from the “morality police” went viral (see below). It noted her “forced confessions” on state TV mark the regime’s systematic efforts to restrict women in public spaces.

We are neither criminals nor offenders, we are the ones who, seeing the bruised eye of Sepideh Rashno, not only do not step back, but we shout together that liberation is our right, and our strength is in our banding together.

Rashno’s brother announced on Monday that the first hearing in his sister’s case has been held. She is accused of “assembly and collusion with the intention of committing a crime against the security of the country”, through communication with foreigners and through her “propaganda activity against the Islamic Republic and encouraging people to corruption and prostitution”.

A writer and artist who “confessed” on State TV to violations of compulsory hijab was beaten before she made the statement, according to activists.

Sepideh Rashno, 28, was arrested on June 15 after a video of her arguing with a woman from the “morality police” went viral. During the encounter on a bus in Tehran, the woman threatened to send the video to the Revolutionary Guards.

The writer has been held in an unknown location without access to a lawyer. A Twitter storm publicized her case with the hashtag, “Where is Sepideh?”

Finally, Rashno was displayed on State TV last week, her eyes darkened and moving slowly. In a monotone, she said a few lines that appeared to have been written for her by authorities.

Citing an “informed source”, the Iranian Human Rights Activists News Agency said Friday that Rashno was taken to a Tehran hospital after making the statement. Suffering from low blood pressure, she was examined for internal injuries.

There are signs of discontent among clerics and legislators over the Iranian regime’s crackdown on women.

Abdolhadi Mar’ashi, an influential cleric in Iran’s second city of Mashhad, has resigned in protest of the misconduct of the “morality police”, the Guidance Patrols.

The cleric wrote, “Our understanding of what is right and what is wrong under Islam has been limited only to the hijab.” He suggested that authorities should focus on issues like “government corruption, social justice, economic security, class disparity, drug addiction, national poverty, [and] freedom of expression”.

Jalal Rashidi Koochi, the head of the Parliamentary committee for domestic affairs, said the morality police “haven’t made anyone observe the hijab”.

But officials are pressing ahead with the crackdown. The Guidance Ministry has told advertising agencies that women are now prohibited from appearing in ads.

The ministry sent its letter over the weekend after the release of a promotional video by the Domino ice cream company, featuring an actress wearing a sweater who puts on further layers of clothing as images of an ice cream bar flash across the screen. At the end of the ad, the actress wears a parka and winter hat while biting the ice cream bar.

The Government called the ad “a crime” which leads to the “promotion of immorality” in the society.

ORIGINAL ENTRY, JULY 24: For Iran’s government, July 12 was to be “National Hijab and Chastity Day”, to mark the importance of the country’s strict rules over women and their bodies. Since the 1979 Islamic Revolution, it is mandatory for women and girls above the age of nine to wear hijab in public.

But the day turned out to be far different. Hundreds of women took to the streets and social media – not to celebrate but to protest against the Iranian regime’s mandatory hijab laws. They removed their headscarves on the streets, posted videos of the act on Twitter, or simply stood in protest – seeking to make #No2Hijab the beginning of a new revolution in the country.

One of the protesters was Negin, a 20-year-old private sector employee from Tehran. She was threatened with sexual harassment by the morality police, as they warned her against demonstrating.

Negin had reached the main street in the capital, where a dozen women were already assembled:

It was a peaceful street protest but I soon saw the Gasht-e-Ershad [the morality police] surround us. They detained some of the women in vans and tried to warn the rest of us. One of the cops walked toward me and said I shouldn’t be in this campaign against hijab. He was implying that women who remove their headscarves are practically nude.

The policeman said the officers would sexually harass them if they did not stop. “I was shocked. They are free to behave aggressively with us because the Islamic Republic of Iran provides for them financially,” Negin recalled.

The #No2Hijab movement was started by Iranian women within the country and in the diaspora, following President Ebrahim Raisi’s 5 July directive for enforcement of “hijab and chastity law”. The order not only forces women to wear a headcover, but also directs them to cover their shoulders and neck.

Negin found out about the #No2Hijab protest on Twitter from prominent Iranian human rights activist and journalist Masih Alinejad, who is in exile in New York City.

Despite an attempt by Iranian intelligence services to abduct her and detain her — or worse — in the Islamic Republic, Alinejad continues to share and amplify videos of women protesting against the mandatory hijab.

She told The Quint:

The Iranian regime has thousands of undercover agents employed across the country to report women for not wearing a hijab. I just received a video from a woman who confronted one of these agents. The agent was recording her and threatened to get her arrested. The undercover agents are even harassing women on their dress codes in women’s sections.

Tomorrow Iranian women will shake the clerical regime by removing their hijab and taking to the streets across Iran to say #No2Hijab. This is called Women Revolution.
In iran #WalkingUnveiled is a crime.
Iranian men will also join us.#حجاب_بی_حجاب pic.twitter.com/pu3uUA1teM

It wasn’t just me who started this campaign. The women in Iran started it and I am just their voice.

This time the protest is different because women fearlessly share videos and pictures without hijab, while showing their faces. They’ve been fighting against this for years. They’re the true heroes for standing up for their freedom of choice.

I have received so many threats over the years, including a kidnapping threat. I have been called various names. But if that’s what it takes for standing up for my dignity, for my freedom of choice, for democracy, so be it.

We are not doing anything wrong but just fighting for our freedom of choice.

After the protest videos of Iranian women went viral on social media, civil rights activist Soori Babaei Chegini was arrested in Qazvin in northwest Iran. Another protester, Melika Qaragozlu, was detained for posting a clip.

Qaragozlu was released on bail, but the whereabouts of Chegini are still unknown.

Chegini’s husband Mohammed Reza Moradbehrouzi said about eight regime personnel “stormed the house” of his brother-in-law to make the arrested. They confiscated the phones of their children, and threatened their 13-year-old daughter.