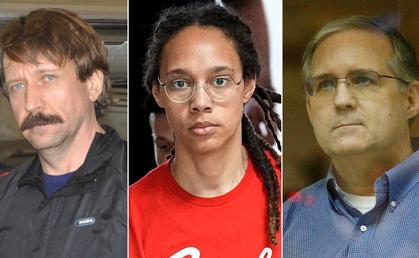 The Kremlin has called for convicted murderer Vadim Krasikov, a former colonel in the FSB intelligence agency, to be added to the prisoner exchange of arms dealer Viktor Bout for Americans Brittney Griner and Paul Whelan.

Krasikov was convicted in December of murdering a former Chechen fighter, Zelimkhan “Tornike” Khangoshvili, in Berlin’s Kleiner Tiergarten in 2019. He was sentenced to life in prison.

The sources said the US Government does not view the demand as legitimate as it was not made through a formal channel. They noted that Krasikov remains in German, not American, custody.

US officials did make quiet inquiries to the Germans about whether they might be willing to include Krasikov in an exchange, a “senior German government source” said.

US Secretary of State Antony Blinken spoke with Russian Foreign Minister Sergey Lavrov on Friday about the issue, in their first contact since Moscow’s February 24 invasion of Ukraine.

“We had a frank and direct conversation,” Blinken said, “I pressed the Kremlin to accept the substantial proposal that we put forward.”

He did not give Lavrov’s reaction: “I can’t give you an assessment of whether I think things are any more or less likely. But it was important that he heard directly.”

ORIGINAL ENTRY, JULY 29: The Biden Administration is proposing the exchange of arms dealer Viktor Bout, imprisoned in Thailand and the US since 2008, for Russia’s US hostages, basketball star Brittney Griner and security director Paul Whelan.

Dr Jenny Mathers of Aberystwyth University and I joined Monocle 24’s Emma Nelson on Friday to discuss the politics, and the wider significance amid Vladimir Putin’s tactics and the difficulties with his invasion of Ukraine.

The Russians thump their chests through hostage-taking. They have done it not only with Brittney Griner and Paul Griner, but with foreign nationals who have fought alongside Ukrainian forces, notably the Britons Aiden Aslin and Sean Pinner and Moroccan Brahim Saadoun — imposing the death penalty and effectively saying, “What are you going to do about it?”