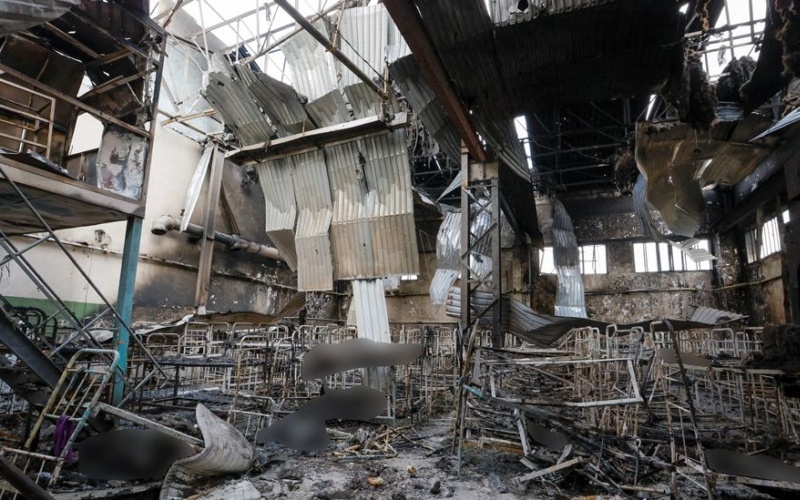 Aftermath of the shelling of a prison, holding Ukrainian POWs, in the Donetsk region in eastern Ukraine, July 29, 2022 (Alexander Ermochenko/Reuters)

The US Government has sanctioned two individuals and four entities carrying out the Kremlin’s political warfare and election interference operations, including in the US and Ukraine.

The Treasury said in a statement:

The individuals and entities designated today played various roles in Russia’s attempts to manipulate and destabilise the United States and its allies and partners, including Ukraine.

The sanctioned individuals are Russian citizens Aleksandr Ionov and Natalya Burlinova. The entities are the Anti-Globalization Movement of Russia, Ionov Transkontinental, STOP-Imperialism, and the Center for Support and Development of Public Initiative Creative Diplomacy.

Ionov was also indicted for working with the Russian intelligence service FSB to “support, usually in the form of monetary donations, to organizations that he and Russia’s intelligence services believed would create socio-political disturbances in the United States” from March 2014 to 2022.

The indictment, issued by a Federal grand jury in Tampa, Florida, cites 3 US political groups as “unindicted co-conspirators” supported by Ionov.

The Treasury does not name the three organizations. However, information in the indictment points to:

The latest Russian strikes on residential districts in the port city of Mykolaiv in southern Ukraine killed one person and wounded six overnight.

On Friday, at least five people were killed and seven injured in a strike near a bus stop.

In the northeast, rocket fire from an S-300 surface-to-air system destroyed part of an educational facility in the city of Kharkiv.

Ukraine has appealed to the International Criminal Court over the shelling which killed more than 40 of its prisoners of war in the detention center in a Russian proxy area of eastern Ukraine.

Zelenskiy said more than 50 POWs were slain. He noted that they should have been protected by guarantees secured by the UN and the Red Cross.

Amid the latest claims of Russia’s war crimes in Ukraine, including against Ukrainian prisoners of war, the Russian Embassy in the UK has tweeted that members of Ukraine’s Azov Battalion deserve death by “hanging”.

The Embassy claimed the troops are “not real soldiers” and that they “deserve a humiliating death”.

Russia is a terrorist state. In the 21st century, only savages and terrorists can talk at the diplomatic level about the fact that people deserve to be executed by hanging. Russia is a state sponsor of terrorism. What more evidence is needed?

In its latest reduction of gas supplies to Europe, Russia has suspended provision to Latvia.

Russian State Gazprom used the pretext of “violations of the conditions”.

The Southern Command also said rail traffic to the west of the region, including Kherson city, over the Dnipro River has been cut.

The deputy head of Ukraine’s Kherson regional council, Yuri Sobolevsky, asked residents to stay from away from Russian ammunition dumps: “The Ukrainian army is pouring it on against the Russians and this is only the beginning.”

UK military intelligence said the Russians have likely established two pontoon bridges and a ferry system, trying to maintain a link across the Dnipro River and its tributaries, after the Ukrainians damaged the four bridges to the western Kherson region.

It added that Russian proxy authorities are trying to assert authority with preparations for “referenda” to join Russia, and are “likely coercing the population into disclosing personal details in order to compose voting registers”.

The Red Cross is seeking access to the shelled detention center in the Russian proxy area of eastern Ukraine.

The ICRC [International Committee of the Red Cross] has offered its support in the evacuation of the wounded and to donate medical supplies, protective equipment and forensic material. Our priority right now is making sure that the wounded receive life-saving treatment and that the bodies of those who lost their lives are dealt with in a dignified manner.

We have requested access to determine the health and condition of all the people present on-site at the time of the attack. We are also in contact with families, taking their requests and inquiries.

ORIGINAL ENTRY: Ukraine’s officials say Russian forces killed at least 40 Ukrainian prisoners of war and wounded 130 in the shelling of a detention center in a Russian proxy area in the east of the country.

Reports circulated early Friday that the prison in the Donetsk region had been struck. Videos showed fire damage and several bodies. Officials of the Russian proxy “Donetsk People’s Republic” declared that the Ukrainian military had attacked their own troops, but produced no evidence.

The Ukrainian military issued a statement later in the morning:

The armed forces of the Russian Federation carried out targeted artillery shelling of a correctional institution in the settlement of Olenivka, Donetsk oblast, where Ukrainian prisoners were also held.

In this way, the Russian occupiers pursued their criminal goals – to accuse Ukraine of committing “war crimes”, as well as to hide the torture of prisoners and executions.

The military noted that the POWs had been transferred to the facility days earlier. It also claimed intercepted phone conversations between Russian troops, the lack of reported shelling in Olenivka, and the absence of casualties among Russian personnel at the prison all pointed to Moscow’s deliberate “terrorist act”.

Russia has committed another petrifying war crime by shelling a correctional facility in the occupied Olenivka where it held Ukrainian POWs. I call on all partners to strongly condemn this brutal violation of international humanitarian law and recognize Russia a terrorist state.

The occupiers’ attack on Olenivka is a deliberate war crime by the Russians, a deliberate mass murder of Ukrainian prisoners of war.

There should be a clear legal recognition of Russia as a terrorist state. Russia has proven with numerous terrorist attacks that it is the biggest source of terrorism in today’s world.

A Russian soldier or mercenary, wearing a black fringed hat, castrated the POW as he was pinned down on the ground, gagged and with his hands tied behind his back.

In a June broadcast by Russia’s State outlet RT, the same Russian fighter was carrying a Dragunov sniper rifle as he walked around the Azot chemical plant in the city of Severodonetsk, in the Luhansk region in eastern Ukraine, after it was occupied by Vladimir Putin’s forces.

The Russian news agency RIA Novosti identified the man as a member of the Chechen “Akhmat” battalion.