Is Ireland Breaking Up With The US? 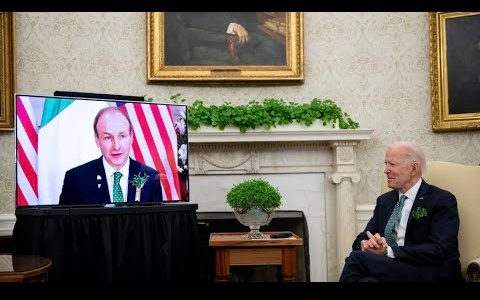 Editor’s Note: Today EA, its partner the Clinton Institute, and the Bertelsmann Foundation are launching the TransAtlantic Periscope’s US-Ireland site.

TransAtlantic Periscope is a portal for the latest news, analysis, and policy documents on US relationships with each of the 27 European Union states and the UK. The US-Ireland site is the third to go live, following US-France and US-Germany.

Marking the launch of the site, Clinton Institute Director Liam Kennedy writes for the Irish Times about the state of the US-Ireland relationship.

“Ireland pursues an independent course in foreign policy, but it is not neutral between liberty and tyranny and never will be.”

In June 1963, US President John F Kennedy offered these words to the Oireachtas, the Irish Parliament. They seem eerily prescient of current interest in Ireland’s neutrality as a signifier of the State’s commitments to international affairs.

See also EA on Dublin NewsTalk: Time for Ireland to Leave the US Behind?

In March, Ireland’s Minister for Foreign Affairs Simon Coveney quoted Kennedy and affirmed, “That is exactly the stance we are taking today.” This may be effective in rebutting criticisms of Ireland’s neutrality, but it glosses over the geopolitical realities of very different moments of international tension. It also affects a certitude about Ireland’s international position that belies growing uncertainty about the US’s global leadership.

Kennedy’s commentary on Ireland’s neutrality was made at the height of the Cold War. Kennedy visited Ireland on his return from Germany, where in Berlin he gave one of the most important speeches of the era — “Ich bin ein Berliner” — and his speech to the Oireachtas resonated with Cold War concerns. He emphasized the US and Ireland’s shared histories of revolution and struggles for independence, symbolically bringing Ireland into the Cold War on the side of the forces of freedom. The visit provided much-needed international recognition for the fledging state and also marked a shift towards White House activism in Irish affairs.

Today an Irish-American president once again occupies the White House and, keenly referencing the shared histories and values of Ireland and the US, is ready to endorse Ireland’s international role. Speaking in March, President Joe Biden praised Ireland’s support of Ukraine in the conflict with Russia: “Everybody talks about Germany having stepped up and changed motions about being more leaning forward and they have. So has Ireland, a neutral country….Ireland has stepped up and taken a hit for what they’re doing.”

There are echoes of Kennedy’s patronage in these words but the two American presidents were facing into very different international crises. Kennedy poised the defining international conflict of his time as one between forces of “liberty and tyranny” and it was widely perceived and enjoined as such by western publics. Biden has poised the defining international conflict of today as one between “democracies and autocracies”, a much less clear and resonant vision at a time of multiple crises in the liberal world order.

Indeed, there is a growing sense that we are approaching closing time for that liberal projection of international affairs. By uncommon consent, we are in the midst of a seismic paradigm shift in international relations, the painful birthing of a new world order, sometimes termed a “post-American world”.