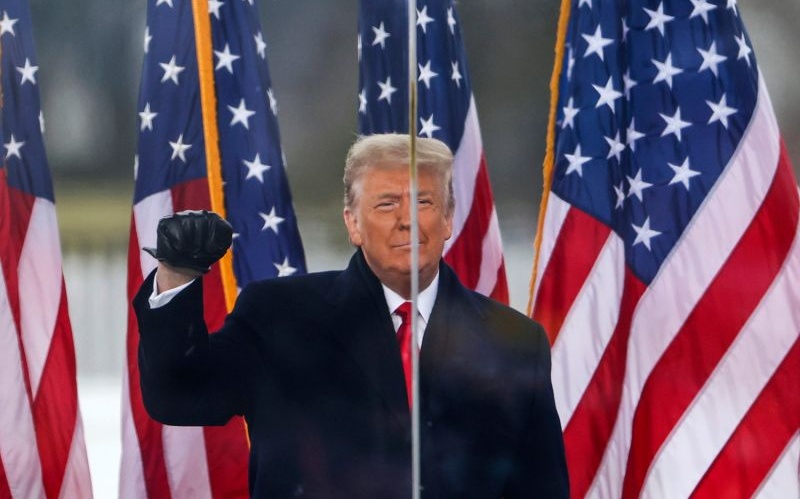 The New York Times amplifies on the remark of House select committee co-chair Liz Cheney that members of Donald Trump’s Cabinet raised the possibility of invoking the 25th Amendment to remove him from office in January 2021.

Secretary of State Mike Pompeo and Treasury Secretary Steven Mnuchin discussed the step, according to “a person briefed on the discussion”.

Education Secretary Betsy DeVos raised the issue with Vice President Mike Pence, who “made it very clear that he was not going to go in that direction”. DeVos then decided to resign, as did Deputy National Security Advisor Matt Pottinger.

Labor Secretary Eugene Scalia called a Pence aide to say that he was uncomfortable with Trump in office without a check on his authority. Pence’s team did not want to pursue more Cabinet involvement.

Donald Trump has lashed out at his daughter Ivanka after the display of her testimony, in the first public hearing of the House select committee on the Capitol Attack, challenging his falsehoods about a stolen election in November 2020.

Ivanka was shown telling committee members, in a deposition, that she was swayed by the words of Attorney General William Barr — also presented in the committee’s video — about Trump’s claims, “I told the President it was bullshit. I didn’t want to be a part of it.”

Trump snapped on his platform Truth Social on Friday:

Ivanka Trump was not involved in looking at, or studying, Election results.

She had long since checked out and was, in my opinion, only trying to be respectful to Bill Barr and his position as Attorney General (he sucked!).

Ivanka also intervened on January 6, 2020 as Trump supporters invaded the Capitol, attacked police, and threatened the executions of Vice President Mike Pence and legislators — all in an attempt to block the Congressional certification of President-elect Joe Biden.

Ivanka told her father to speak out and halt the attack. For three hours, he refused, instead saying that Pence — who refused to stop the confirmation of Biden’s Electoral College victory — deserved to be hanged.

Her deposition was in sharp contrast that of her husband, fellow White House senior advisor Jared Kushner. He claimed that Trump’s White House legal team were “whining” when they threatened to resign amid Trump’s attempts to overturn the election and pardon allies.

my interest at that time was on trying to get as many pardons done….

[White House Counsel Pat Cipollone] and the team were always saying, “Oh we’re going to resign, we’re not going to be here if this happens, if that happens.” I kind of took it up to just be whining, to be honest to you.

Trump continued his assault on Barr — who had protected Trump since January 2019 during the Russia and Ukraine investigations — in two other social media posts. He said the former Attorney General was a “coward,” “weak and frightened,” “stupid” and “scared stiff of being impeached”.

Meanwhile, Trump lawyer Rudy Giuliani was charged on Friday with ethical misconduct over his leading role in the attempt to throw out Biden’s electoral triumph.

The Washington DC office overseeing attorneys said Giuliani, a member of the DC bar, made baseless claims in federal court filings about the November 2020 results in Pennsylvania.

The Pennsylvania filing was one of more than 60, by attorneys for Trump and his allies, that were thrown out by state and federal courts.

ORIGINAL ENTRY, JUNE 10: The House select committee on the Capitol Attack of January 6, 2021, has opened its public hearings about Donald Trump’s incitement of the assault, as he attempted to prevent the Congressional certification of President-elect Joe Biden.

Thursday’s two-hour combination of summarized evidence — including testimony by Trump Administration officials — witness statements, and new footage of the attack, the committee began to lay out the three phases of Trump’s attempt to overturn the Constitution and retain power.

*Trump’s false claims about a rigged election, beginning on Election Night, with more than 60 failed legal cases all the way to the Supreme Court;

*The plan to remove Biden’s electors and replace them with Trump’s slates — beginning with Trump’s pressure on State officials and legislatures and culminating in a scheme to block the January 6 Congressional certification of Biden, a plan foiled when Vice President Mike Pence refused to participate;

*The support of a Capitol invasion to halt the certification, including Trump’s encouragement in a speech outside the White House and his refusal to check the attackers as they threatened to kill Pence and legislators.

The committee culminated its opening statement with a graphic video of the attack, including the beatings of Capitol Police officers and the threats to lawmakers, and gripping testimony.

Officer Caroline Edwards was knocked unconscious, pepper-sprayed, and tear-gassed by the attackers. She recounted:

I saw officers on the ground. They were bleeding. They were throwing up.

I was slipping on people’s blood. It was carnage. It was chaos.

“Trump Was at the Center of Conspiracy”

The narrative of the attack was complemented by evidence, in clips from depositions and in witness testimony, of Trump’s role:

*Trump endorsed the hanging of Pence — told of the attackers’ chants to “Hang Mike Pence”, Trump responded, “Maybe our supporters have the right idea. He deserves it.”

*Trump’s Cabinet members discussed invoking the 25th Amendment to remove him from office.

*Requests for Presidential pardons were made by several Republican Congressmen involved in the plot to block Biden’s certification, including Rep.Perry of Pennsylvania, now the chairman of the conservative Freedom Caucus.

*Former Attorney General William Barr said of Trump’s election claims, “I told the president it was bullshit. I didn’t want to be a part of it.” Ivanka Trump said she was swayed by Barr’s assessment.

*Jason Miller, a Trump loyalist and campaign manager, said he was shown the data that Trump could not have won the November 2020 election. Alex Cannon, a campaign lawyer, told White House Chief of Staff Mark Meadows that there was no evidence of irregularities. Meadows replied, “So, there’s no there there” — but was central in the schemes declaring fraud and trying to overturn the vote.

*On December 18, 2020, a White House meeting including Trump, former National Security Advisor Michael Flynn, and lawyers Sidney Powell and Rudy Giuliani discussed a declaration of martial law and the re-running of the election. Those ideas were put idea but hours later, Trump tweeted about a rally on January 6, “Be There. Will Be Wild.”

*Plans for the rally were paralleled by the scheme to have Vice President Pence rule out Biden’s electors and send the decision to the House of Representatives.

Donald Trump was at the center of this conspiracy. And ultimately, Donald Trump, the president of the United States, spurred a mob of domestic enemies of the Constitution to march down the Capitol and subvert American democracy….

Our democracy remains in danger. January 6 and the lies that led to insurrection have put 2 1/2 centuries of constitutional democracy at risk. The world is watching what we do here.

Thompson said the next hearing on Monday will set out Trump “lit the fuse” for the Capitol Attack with his lies about the election.

Hearings will continue through June, including:

*Trump’s pressure on the Justice Department to support the falsehood of the fraudulent election, throwing out the result;

*The pressure on Vice President Pence to throw out Biden’s electoral votes;

*The assembly of the attackers and their assault on January 6;

*Trump’s refusal to stop the attack for more than three hours.