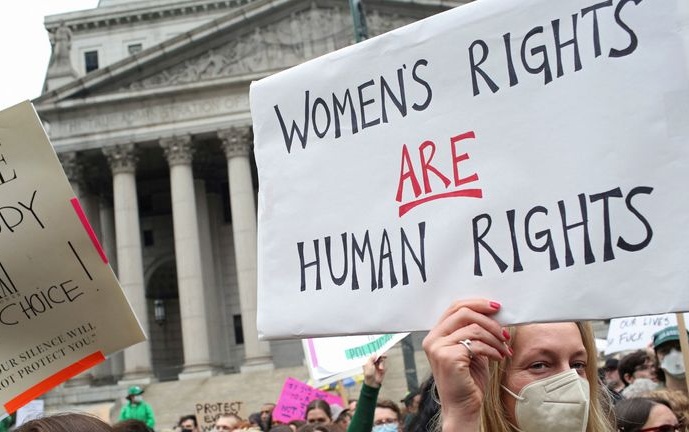 Abortion protest outside the US Supreme Court (File)

I joined Ireland’s RTE Radio 1 and BBC Radio Scotland on Monday to discuss the response — political, legal, and social — to the Supreme Court’s overturning of Roe v. Wade and challenge to women’s rights.

I discuss the efforts to help women who are in states outlawing or sharply restricting abortion, the prospect of bans on “morning after” pills, the place of abortion in November’s mid-term elections, and the damage of the Supreme Court’s decision.

What was so destructive was the Court going beyond the request of Mississippi officials for a 15-week limit on abortion. The conservatives, throwing out Roe v. Wade entirely, hands this over on a state-by-state basis.

Up until this Supreme Court decision, most analyses said November’s elections would be hard running for the Democrats. Putting abortion at the top of the agenda could make it more difficult for the Republicans to make significant gains — if this mobilizes people who put a priority on women’s rights to vote for politicians who do the same.

I spoke further with BBC 5 Live on Saturday about the effects of the dismissal of the Roe v. Wade precedent by six conservative Supreme Court judges.

I review how a politicized Court went even beyond the request of the plaintiffs — a 15-week limit on abortion — to allow states to ban or sharply restrict the procedure.

Then I summarize the slim chance that the limitation of women’s rights can be checked, and what faces women in states that do not allow abortion.

If you are a woman who lives in southern Texas, if you live in New Orleans, you have to travel 700 or 800 miles to reach a state which *may* still allow abortion.

If you cannot afford that journey, if your circumstances do not allow it, you either carry the pregnancy to term — whatever the effect on you and your family — or you risk a “backstreet” abortion, which can be damaging and even deadly.

ORIGINAL ENTRY, JUNE 24: I joined China’s CGTN and the BBC on Friday to analyze how six conservative Supreme Court Justices overturned Roe vs. Wade and paved the way for states to deny women’s rights over abortion.

I explain the context for the reversal of a 49-year precedent, and how the Supreme Court — fulfilling the mission of Republican legislators to pack the bench with conservatives — became a political weapon in the guise of legal interpretation.

Perhaps most importantly, I discuss the position for 40 million women, in states which have already or are likely to ban or severely restrict abortion rights, who face a return to the pre-1973 lottery over their lives.

I can’t remember when abortion was not a hot-button issue.

What makes this different, what feeds the division is that about 20 years, we had settled this as the law of the land.

Listen to BBC Hereford and Worcester from 2:09.09

I think this not only overturns 50 years of precedent; it puts the US out of line with how most countries are approaching women’s and social rights today.