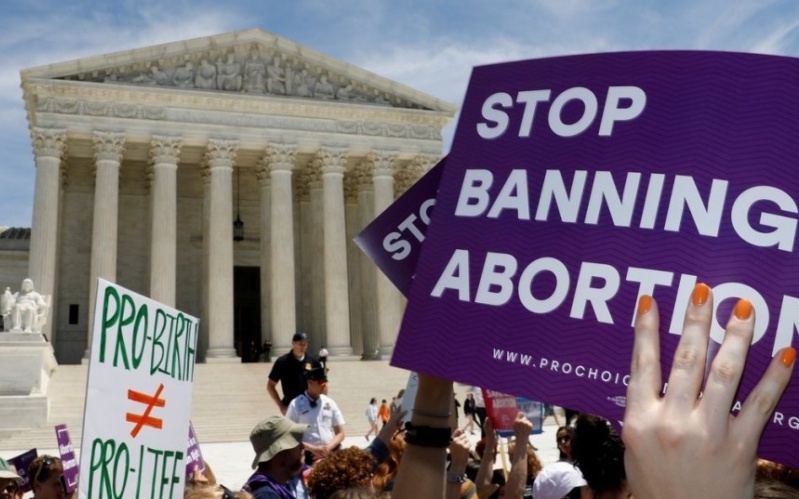 I am heartbroken today. I am heartbroken for people around this country who just lost the fundamental right to make informed decisions about their bodies. I am heartbroken that we may now be destined to learn the painful lessons of a time before Roe was made law of the land – a time when women risked losing their lives getting illegal abortions.

A time when the government denied women control over their reproductive functions, forced them to move forward with pregnancies they didn’t want, and then abandoned them once their babies were born.

President Joe Biden says that “the health and life of women in this nation are now at risk” after the conservative justices on the Supreme Court overturned the Roe v. Wade abortion precedent and a woman’s right to choose.

As expected, the conservative justices of the Supreme Court have overturned Roe v. Wade, the 1973 precedent establishing a woman’s right to abortion.

The 6-3 decision was on the lines of the draft opinion, written by arch-conservative justice Samuel Alito, which was leaked in early May.

Gorsuch, Kavanagh, and Coney Barrett were all appointed by Donald Trump. Fulfilling the mission of Republican politicians like the party’s Senate leader Mitch McConnell to pack courts with conservatives, the three justices opened the way to re-open the abortion issue and strike down almost 50 years of established law.

In their confirmation hearings in the Senate, each of the three had pledged not to overturn Roe v. Wade. None of the three has explained why the promise was broken.

Chief Justice John Roberts voted with the majority. However, amid reports that he supported the right to abortion up to 15 weeks of pregnancy, he he said he would have taken “a more measured course,” stopping short of overruling Roe outright.

Hearing the case Dobbs v. Jackson Women’s Health Organization, The Supreme Court overruled lower courts that found a Mississippi law unconstitutional. Indeed, the Court went even farther, since the law only restricted abortion to the first 15 weeks of pregnancy and did not ban it.

Judge Carlton Reeves of the Federal District Court in Jackson, Mississippi, blocked the law in 2018. He said the legal issue was straightforward and questioned the motives of state legislators.

The state chose to pass a law it knew was unconstitutional to endorse a decades-long campaign, fueled by national interest groups, to ask the Supreme Court to overturn Roe v. Wade.

This court follows the commands of the Supreme Court and the dictates of the United States Constitution, rather than the disingenuous calculations of the Mississippi Legislature.

The three judges of the US Court of Appeals for the 5th Circuit in New Orleans upheld Reeves’s ruling. Judge Patrick Higginbotham wrote, “In an unbroken line dating to Roe v. Wade, the Supreme Court’s abortion cases have established (and affirmed, and reaffirmed) a woman’s right to choose an abortion before viability.”

In June 2020, before the appointment of Coney Barrett, the Supreme Court struck down a restrictive Louisiana abortion law in a 5-4 ruling, with Chief Justice Roberts joining the majority.

More than half of US states are expected to introduce bans or sharp restrictions on abortions. At least 13 have “trigger laws”, bringing in bans as soon as Roe was overturned.

Alito then drafted the opinion in February. The Court is scheduled to confirm the ruling in July.

The Court is hearing a challenge to a Mississippi law which bars abortion after 15 weeks of pregnancy. The measure defies Roe v. Wade and a 1992 decision, Planned Parenthood v. Casey, that maintain the right to abortion.

Some legal observers expected the court to maintain the standard of fetal viability while accepting a limit of 15 weeks. However, Alito shredded that expectation with a rare reversal of precedent, assailing his predecessors as “egregiously wrong” on Roe v. Wade.

With the legal pose that “it is time to heed the Constitution, he turned abortion into a political matter with a “return [of] the issue of abortion to the people’s elected representatives”.

About half of the 50 US states — all with Republican-controlled legislatures — have moved to ban or sharply restrict abortions, with 15 following Texas’s limit of about six weeks. There are current or proposed “trigger laws”, banning abortion as soon as Roe v. Wade is overturned, in 18 states. Other legislatures have passed measures for long prison sentences for doctors and nurses who carry out the procedure.

However, with Roe v. Wade standing as precedent, federal judges have checked some of the restrictions.

Much of Alito’s opinion is invective, describing doctors and nurses as “abortionists”. He blamed the Court’s precedents for the politics around the issue — “Roe and Casey have enflamed debate and deepened division” — and proclaimed that the Justices’ “survey of history ranged from the constitutionally irrelevant to the plainly incorrect”.

He also threw out the standard set by Roe of “fetal viability” to establish abortion guidelines, claiming that it “makes no sense”. He replaced it with the unsupported claim that some proponents of the right to choose were motivated by eugenics: “[They] have been motivated by a desire to suppress the size of the African American population.”

The core of Alito’s legal argument is that a woman’s right to choose is not specified in the Constitution: “The inescapable conclusion is that a right to abortion is not deeply rooted in the Nation’s history and traditions.” That assertion threatens to undo not only abortion rights but also civil rights in other areas of American life.

For decades, US courts have held that there are “unenumerated rights”, such as the rights of minorities to equal treatment, the right to contraception, and the right to same-sex marriages. They have ruled that these are part of the 14th Amendment’s guarantees of personal rights and the right to privacy.

Alito brushed aside the cultural establishment of rights in almost 50 years after Roe, a point made by Justices Sandra Day O’Connor, Anthony Kennedy, and David Souter in the 1992 Casey ruling:

An entire generation has come of age free to assume Roe‘s concept of liberty in defining the capacity of women to act in society, and to make reproductive decisions.

Anticipating the concern over his opinion, Alito — and possibly his conservative colleague — asserts, “We emphasize that our decision concerns the constitutional right to abortion and no other right. Nothing in this opinion should be understood to cast doubt on precedents that do not concern abortion.”