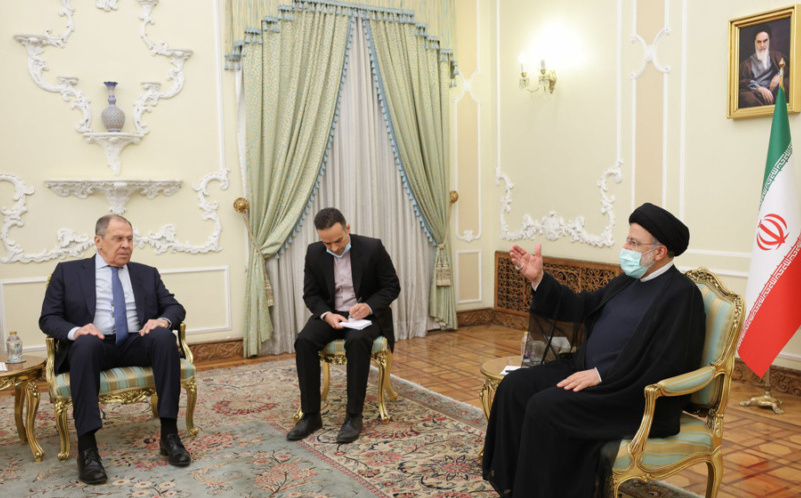 Amid stalled Iranian nuclear talks and the Russian invasion of Ukraine, Russia’s Foreign Minister Sergey Lavrov is in Iran’s capital Tehran for two days of discussion “to expand cooperation”.

No details were given about the substance of the Lavrov-Raisi meeting. Instead, amid sanctions on Russia over its invasion and on Iran over its nuclear program, the Foreign Minister issued declarations assailing the US and other countries:

All countries experiencing the negative influence of the egotistical policies of the United States and its satellites have an objective need to “reconfigure” their economic ties in such a way as not to depend on the whims and vagaries of our western partners.

There is no doubt that the US and NATO provocations have been the factor behind these conflicts [in Ukraine], and therefore it is necessary to be active in the face of attempts to expand NATO’s influence in any part of the world, including in West Asia, the Caucasus, and Central Asia.

For years Russia and Iran have spoken of barter arrangements to bypass sanctions, swapping supplies for oil and gas. No arrangements have been established.

The economies of both countries are under severe pressure. The Russian invasion has brought international sanctions, restrictions on trade and investment, and the departure of most international firms from the country. With nuclear talks stalled since March, Iran’s currency is at a historic low, and there are protests and strikes across the country by pensioners, teachers, factory workers, merchants, and other groups.

Raisi asserted, “Strengthening cooperation and coordination is an effective way to counter US sanctions and economic unilateralism against independent nations.”