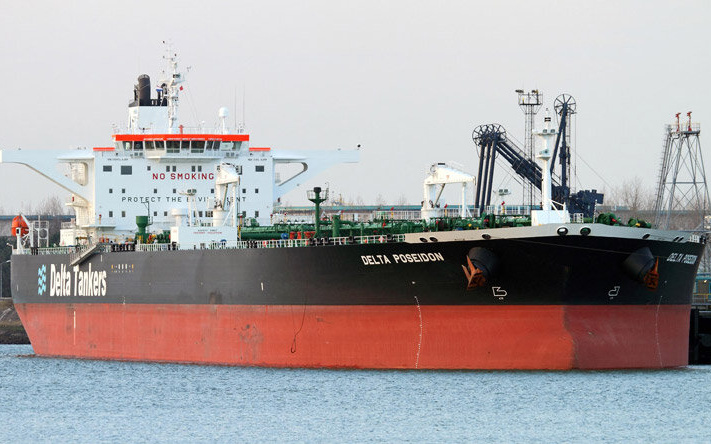 The Greek-flagged tanker Delta Poseidon, boarded and detained by Iran’s Revolutionary Guards, May 26, 2022

A Greek appeals court has overturned a ruling that allowed US confiscation of part of an oil cargo on an Iranian-flagged tanker off Greece’s coast, according to “three sources familiar with the matter”.

Representatives of Iran, which seized two Greek tankers in retaliation, have not offered a response. However, the story is being featured on Iranian State media.

The Iranian tanker, the Lana, was later seized in a separate case by Greek authorities acting on an interim court order over alleged debts to another shipping company.

A de facto spokesman for the Iranian regime, Tehran University’s Seyed Mohammad Marandi, argues that the Greek appeals court’s decision bolsters the case for seizure of tankers by the Revolutionary Guards.

The Greek appeal court overturned the ruling to steal Iranian oil. Iran won't allow Nato to get away with theft. It's obvious that the reason the appeal court made this decision, was Iran's ability to retaliate. In future, piracy will be met with a punishing response. pic.twitter.com/mpCdBGZy7A

ORIGINAL ENTRY, MAY 29: Iran forces have seized two Greeks tankers, retaliating over the US confiscation of Iranian oil from a tanker held off the Greek coast.

The tankers were detained on Friday in the Persian Gulf for “maritime violations”, said Iran’s Ports and Maritime Organization.

The crew of the two Greek tankers have not been arrested, and all crew members…are in good health and are being protected, and provided with necessary services while on board, in accordance with international law.

Greece officials said that an Iranian navy helicopter landed on the Delta Poseidon in international waters, taking the crew hostage, and that a similar boarding took place on another Greek-flagged vessel.

Iran has periodically acted over US sanctions by detaining international ships in the Persian Gulf. In summer 2019, it held the UK-flagged Stena Impero in response to the impoundment of an Iranian tanker off Gibraltar. In spring 2021, hoping to force the unfreezing of $7 billion of Iranian assets in South Korean banks, it held a South Korean tanker Hankuk Chemi for more than three months.

Our ancient ties with Greece & its great people have always been based on mutual respect.

Our ties must not be hampered by deeply shortsighted miscalculations, including highway robbery on the command of a 3rd party.

Tankers crew are safe and in good health. pic.twitter.com/XWyIoY8bhM